QUOTE.fm Is Building the Next Read-Later Service That's Actually Worth Using

Everybody has time to read, but nobody has time to read right now. A variety of services, including Instapaper, Pocket, and Readability, act as a placebo of sorts, allowing ever-hurried readers to feel less guilty for not having the time to read the hundreds of blog posts thrown onto the Web every hour. QUOTE.fm is throwing its proverbial hat into the read-it-later ring with its aptly-named Read feature, a major expansion to the service.

Currently in beta, Read will be available on QUOTE.fm' s website and upcoming iPad app at launch. QUOTE.fm has quickly become one of the best reading apps on my iPad (of which there are many) despite its beta status.

Built in 2011 to help people share what they're reading, QUOTE.fm differs from similar services by giving readers control over the snippet of text displayed when they recommend an article. This granular control makes sharing an article feel more personal, as users are forced to decide why their followers should read something instead of pressing an embedded Share button and moving along.

Before Read, the biggest problem with sharing an article via QUOTE.fm was the fact that a relatively small number of apps utilize the service. Instapaper or Readability users aren't going to start reading articles in the browser again just to access QUOTE.fm. The service would have to come readers, as opposed to making readers come to it.

Simply building an offline reading solution wouldn't be enough to convince users to switch. The lock-in effect that occurs when a user becomes used to a certain app or service is particularly relevant with apps that users can spend hundreds of hours in. Not only do users become accustomed to an apps' idiosyncrasies and feature set, they also start to feel an emotional attachment to the product. It's similar to what Phil Libin says of Evernote: The app becomes more and more useful as more and more time is spent within its boundaries.

Put simply, QUOTE.fm delivers. While the app has gone through a few rough patches as it progressed through the beta stage, the current 1.0-yet-unreleased version is stable and nice to use. Animations are at once plentiful and respectful, adding visual flair when it's required but never patronizing the user. The app offers multiple color schemes (the typical "light" and "dark" as well as an out-of-place, red and tan "Swiss" theme), a variety of fonts, and a comprehensive set of options regarding line spacing, width, and justification. 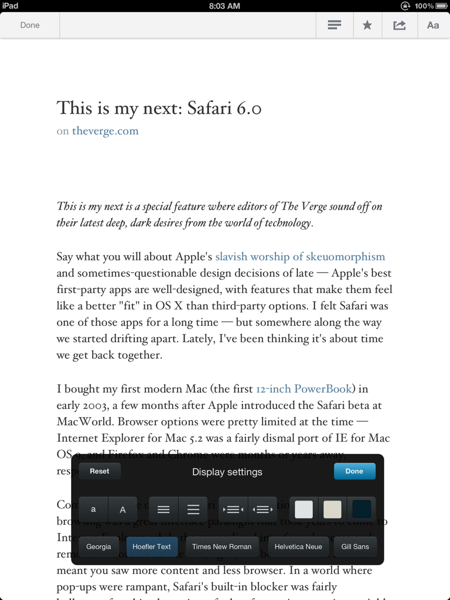 I made a concerted effort to use QUOTE.fm as my main "article bucket" during my beta testing, and only one thing (outside of typical beta woes) stood in my way: The bookmarklet. Instead of building an extension that users can click once and trust that an article has been saved, QUOTE.fm's bookmarklet requires two clicks. One to  display a menu offering "Read Now," "Read Later, "Send to Kindle," and "Nevermind" and another to select one of those three. I understand the reasoning behind using a bookmarklet and requiring multiple clicks (both Instapaper and Readability do at least one of those things) but it's frustrating coming from Pocket's one-click solution.

Besides that one, easily fixed pseudo-problem, QUOTE.fm has successfully extended its service and built a quality app in a relatively short amount of time. The combination of social network and read-it-later service may become more common than it is right now, but at the moment QUOTE.fm is the shining example of how the two services can work together.