Spotify pulls a trump card on the haters with Metallica addition

In the last month, through a barrage of blog posts, we've gotten an earful about what artists really think about Spotify. Short answer: they don't love it. They think the pennies they get paid per stream is a rip off, and that it's cannibalizing their album sales. They're not much keener on Pandora, as we saw with the 125-artist petition against Pandora's pet legislation, the Internet Radio Fairness Act.

It's left services like Pandora and Spotify a little bit baffled. They're trying to help artists, and paying out the ear for it, happily. Pandora will pay more in royalties this year than the entire radio industry of any single country in the world, CEO Joe Kennedy says. Spotify has paid $500 million in royalty fees in the last nine months, CEO Daniel Ek said today. That's more than double what it paid over the prior nine months. Their argument is that this is new money coming in that might have otherwise been lost to piracy. Spotify is a complementary solution, Ek said, to hit single-driven iTunes. Spotify listeners care about whole albums. Artists should not have to make Rihanna-style albums containing eight or ten singles. A third of all Spotify playlists are whole albums people have saved, Ek said.

To fight this PR battle, Pandora has trotted out a a few obscure artists like Patrick Laird of Break of Reality to vouch for the value of its service. Spotify today took the fight to a whole new level, basically going nuclear on the haters. At a press event to announce a bevy of new features, Spotify presented Lars Ulrich, the drummer of Metallica. 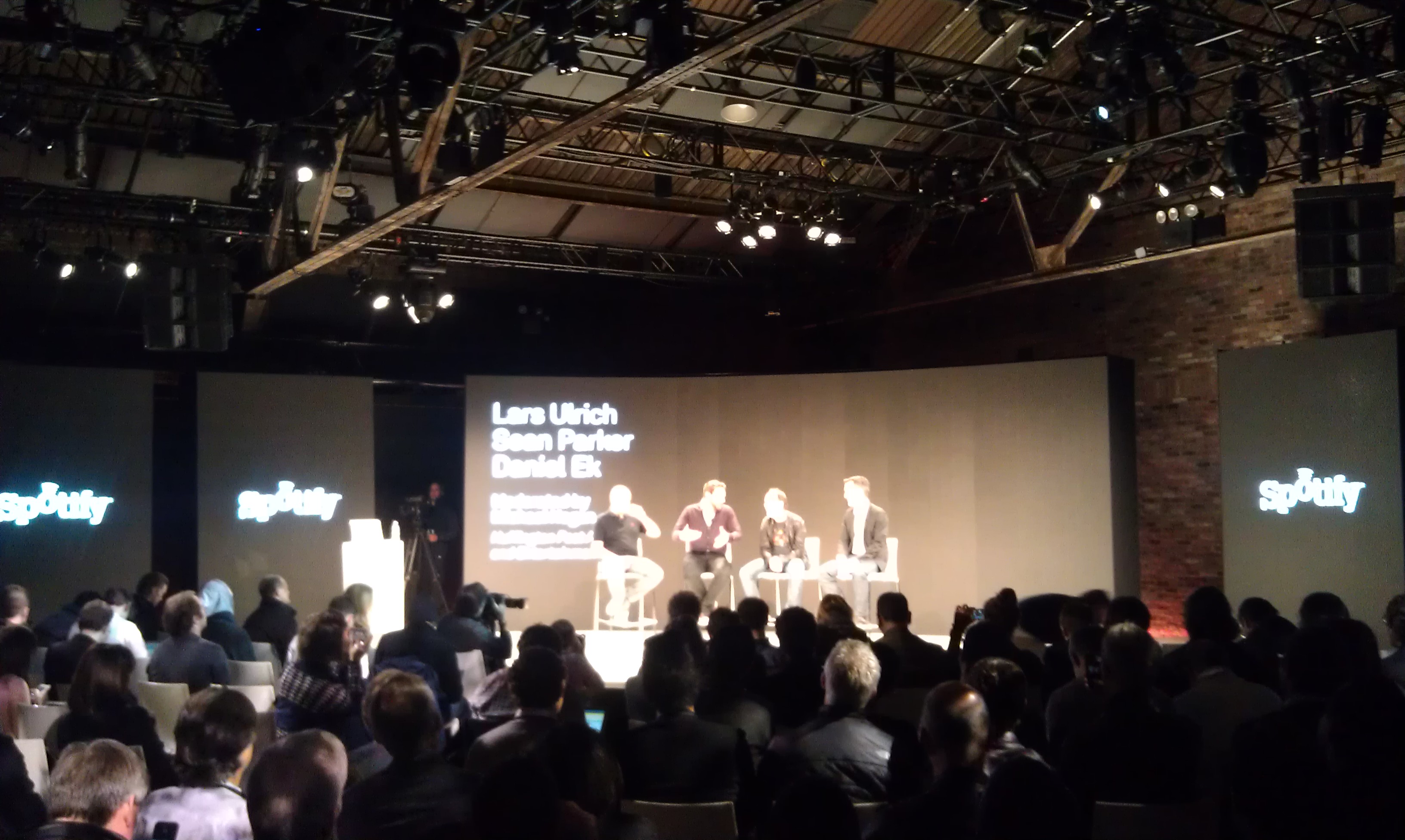 The addition of Metallica's music to Spotify's service itself is not particularly meaningful. Half of Spotify's users are too young to know about Metallica anyways. Ulrich even said that his decision to embrace digital was influenced by his children, ages 11 and 14. The way they interact with music couldn't be different from his childhood experience of sharing tapes by mail and hanging out at record stores, he said.

No, it's meaningful because Ulrich famously sued Napster over piracy complaints, ultimately leading to the music sharing service's collapse and becoming the face of the music industry's ongoing battle against digital innovations. The idea of bringing him on board, and on stage, was to send a message. If we can convince this guy -- the most backward, anti-digital jerk in the industry -- to like us, then we must be doing something right.

The two, in a rather rosy view of events past, discussed the ways they aren't so different after all. They blamed the media (awkward, this was a room full of journalists) for adding fuel to the fire of their Web 1.0 battle. Parker said he was a 19-year-old hacker just trying to make music "more free as in freedom, not free as in theft," but was unfairly depicted as a greedy pirate. Ulrich said he was unfairly depicted as a greedy anti-fan bureaucrat who only cared about money.

He described the anger he felt after finding out that an unfinished Metallica song had been leaked on Napster and was being played on radio stations. Going after Napster was his way of trying to get control back over his music; he had no idea at the time direction the music industry was headed, he explained. The timing worked out well -- Metallica recently gained all the rights and control over its music, Ulrich said. Choosing to go to Spotify first is a solid vote of confidence for the service, music industry haters be damned.

Of course, that wasn't the main focus of Spotify's event today. As reported everywhere, the company revamped its service to offer richer functionalities that will be made available on all devices in January. It's all very cool, with better discovery, less of an emphasis on the work-intensive user-generated playlists and more touch points between artists and fans. Ek noted that Paul McCartney, Katy Perry and Justin Bieber were on board to use the new tools. The new features will capitalize on the rich amount of data and tools already inside Spotify thanks to its ecosystem of apps.

Of course, none of that matters if Spotify can't win over the industry and get all the music in the world on its service. It needs that to keep users happy, sell ads or subscriptions, and become a profitable business, living up to its whopping $3 billion valuation on its last round of funding. The company today revealed it has 20 million users, 5 million of which pay to subscribe. Only a million of users in the US subscribe; the service has been available here for just over a year.

Song-wise, it's still a work in progress. Unlike Pandora, which battles with Congress for streaming fees paid to a government body called SoundExchange, Spotify does its deals directly with the labels. Its catalog is only as strong as its relationships are. Ek had to go to crazy lengths for two-and-a-half years to secure those relationships, one point sleeping outside of an office building on the street for two months just to get a meeting with a label exec. He attributes this drive to his mentality of "impossible thinking, something that started when he built a mini Web design empire at age 13. He doesn't seem interested in slowing down now.

"We're trying to sign all the artists. We want all the music in the world on Spotify," Ek said. He noted that it's been 10 year since iTunes launched, and even then, the band ACDC only just started selling its albums there last week. "It will take a long time and I am 100 percent confident we will get them all on there." Even if, like today, it has to win over one band at a time.