The next generation shopping cart is the house that crowdfunding built

With the announcement, Celery is elaborating on its plans to take over the e-commerce checkout world. "We're doing to the shopping cart layer what Braintree and Stripe did to the payments layer," co-founder and CEO Chris Tsai says. What he means by that is that Celery makes it easy for companies to integrate e-commerce checkouts into their websites and apps. That's the shopping cart part where customers enter their names, emails, credit card information and other good stuff.

In this regard, Celery will be competing with the likes of Shopify and Magento, heavyweights in the space that have been around for eight and four years respectively. Although they're the more powerful, well-known incumbents, their age may wind up being their downfall. Both were built during an era of desktop, not mobile.

"We really believe that the existing way that people set up storefronts is not a future," Tsai says. "We believe the future will look more like a mobile first, developer friendly, well designed way to do storefronts."

That's all well-and-good visionary fluff, but what does that mean in practice?

For Tsai, that means designing Celery so it's clean and easy to navigate on a phone, whether in app or via a mobile browser, unlike Magento's interface. If developers build their company's checkout using Celery's API, it doesn't bounce the user to Celery's own webpage, as opposed to companies using Shopify. 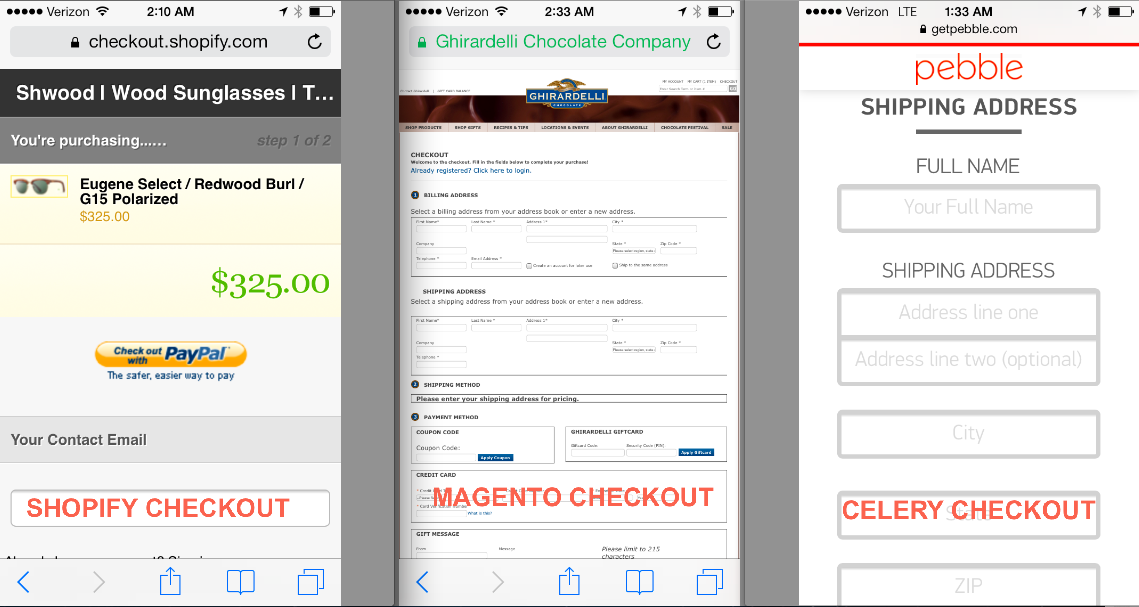 From left to right: A Shopify, Magento, and Celery mobile checkout experience

Tsai says that Celery's revenue is growing 30 percent month over month. Of course, like many startup metrics, without the actual revenue numbers, which the company doesn't give out, that could mean anything. A better reference point is who it services.

Celery has landed some of the big tech hardware companies after they wrap up crowdfunding campaigns, including Kickstarter's all time most successful campaign: the Pebble smart watch. Other customers include 3Doodler, which raised $2.3 million through crowdfunding, Airtame which raised $1.3 million, and RigidBot, which raised $1.1 million. "All the biggest crowdfunding products that choose to use an e-commerce shopping cart are choosing us," Tsai says.

If this truly is next generation e-commerce checkout, it's the house that crowdfunding built.

"The fastest growing part of the e-commerce shopping cart problem was companies who wrapped up crowdfunding campaigns and needed to keep taking preorders," Tsai says. "Merchants who found us appealing were graduates of Kickstarter and Indiegogo." They needed a storefront e-commerce system that could stick with them in perpetuity, helping them handle preorders and then scaling with them once they started selling to the masses.

These were largely tech hardware companies that understood the value of a mobile-first, developer friendly, design focused shopping cart system. Celery was a natural fit, particularly given that it solved one of the biggest crowdfunding pain points: chargebacks. That's when pissed off pre-order customers get suspicious that the products they "pre-ordered" months prior are never coming and thus report the purchases as fraud to their credit card agencies.

Merchants pay a heavy penalty when that happens, and Celery prevents it by storing customers' credit card information and charging it at a much later date. Customers are warned when preordering.

Celery has a lot going for it, but we'd be remiss not to discuss the challenges it faces. For one, its competitor Magento was bought by eBay in 2011 and has swept up loads of huge enterprise customers since then: Everyone ranging from Ghiradelli and Fiji Water, to Office Max and Nike.

In e-commerce, whether in payments processing or shopping cart systems, brand name recognition matters. With eBay's heft behind it, Magento is clearly not going anywhere anytime soon. That stability inspires trust in big enterprise clientele, and such business begets more business.

Meanwhile, Shopify has won the hearts and minds of smaller artisans and craftmakers, and reportedly has added the likes of Budweiser, Gatorade, and Wikipedia to its customer roster.

Celery is far behind both of these competitors, and its scalable success rests on bigger companies realizing they need a better mobile shopping cart solution, or smaller companies flocking to Celery in droves. It's a little fish in a big pond and will have to build out a wide range of features and products to compete.

Furthermore, in its short life, Celery already has some toxic history to overcome.

You may know the startup by its infamous co-founder, Peter Shih. Shih was the original poster boy of the Silicon Valley "privileged elite," long before Greg Gopman came along and usurped the title. Remember the "10 Things I Hate About You: San Francisco Edition" post? Yeah that was Shih, roughly a year after Celery graduated from YC.

Aside from a New York Times interview on his big blunder, Shih has kept his head down and focused on building out Celery's product and customers alongside his co-founders.

If this funding announcement is any indication, his company has moved on relatively unscathed.