Rocky Agrawal's email to friends: "if you are open to speaking with media about what a great guy I am, that would be very helpful"

As has been widely reported, former Paypal "director of strategy" Rocky Agrawal has left the company after a series of bizarre tweets from New Orleans. While many suggested the tweets might have been the result of a night on the sauce (something I can more than sympathize with), Agrawal is still churning out his strange updates, days later, insisting it's all part of his grand career plan. 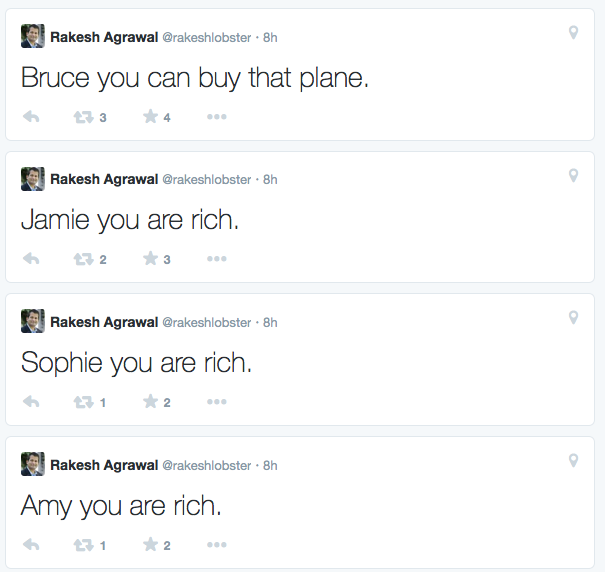 (For what it's worth, despite Agrawal's insistence that he quit Paypal before this scandal erupted, high up sources at the company tell Pando they requested his resignation after he sent a series of equally unusual internal emails. The tweets began shortly afterwards.)

Over the weekend Agrawal tweeted about another email, this one sent to friends, in which he apparently clarified his position. While normally Pando has a policy against republishing private emails, it seems clear that Agrawal is keen for his letter to be made public, even taunting reporters to find it...

Maybe some enterprising reporter will find a copy of the email I sent out this morning.

Don't believe everything you read in the media.

Or what paypal is saying.

The truth is I resigned Friday before the epic DM fail. I have two witnesses who saw me do it. There is email evidence. Thank god for timestamps!

Even as late as Friday afternoon/early evening I was working my ass off trying to reinvent paypal. I was working to save a brilliant mind from quitting paypal.

During that conversation he ended up convincing me that I was being too optimistic about paypal's prospects.

I took the role because I believed the company had a huge future. I quickly discovered that despite the hype and the constant mantra of GSD, few people at the company actually want to get stuff done.

I still have huge respect for David marcus, stan Chudnovsky and hill Ferguson. I think they are extremely sharp. But it takes a long time to turn a ship that large.

As stan told me in email, I got more stuff done in 3 days then the typical paypal employee does in years.

I want to launch a whole different kind of company.

I want to do this quickly so I have zero time for discussion.

I have already built a team with 2 rock star designers, 2 top flight business minds and more. engineer hiring is in process.

Work is already under way.

If you are an accredited investor, please let me know. ASAP.

I will cap the round at $250,000. I actually don't need any of the money. But I wanted to give people I know an opportunity to get in on the ground floor. Since friday, people have been knocking on my door and I already have verbal commitments for $75k.

This offer is only for accredited investors.

Also, if you are open to speaking with media about what a great guy I am, that would be very helpful. [Photo: Rocky Agrawal (Twitter)]