This morning, Pierre Omidyar's The Intercept published a story entitled "Data Pirates of the Caribbean*" claiming that "The National Security Agency is secretly intercepting, recording, and archiving the audio of virtually every cell phone conversation on the island nation of the Bahamas."

According to documents provided by NSA whistleblower Edward Snowden, the surveillance is part of a top-secret system – code-named SOMALGET – that was implemented without the knowledge or consent of the Bahamian government. Instead, the agency appears to have used access legally obtained in cooperation with the U.S. Drug Enforcement Administration to open a backdoor to the country’s cellular telephone network, enabling it to covertly record and store the “full-take audio” of every mobile call made to, from and within the Bahamas – and to replay those calls for up to a month.

It's a heck of a scoop, but it's as notable for what's missing as what's included. Buried deep in the piece is this paragraph:

Documents show that the NSA has been generating intelligence reports from MYSTIC surveillance in the Bahamas, Mexico, Kenya, the Philippines, and one other country, which The Intercept is not naming in response to specific, credible concerns that doing so could lead to increased violence. The more expansive full-take recording capability has been deployed in both the Bahamas and the unnamed country.

Unsurprisingly, given the Intercept's promise to report without fear, favor or government interference...

The editorial independence of our journalists will be guaranteed. They will be encouraged to pursue their passions, cultivate a unique voice, and publish stories without regard to whom they might anger or alienate. We believe the prime value of journalism is its power to impose transparency, and thus accountability, on the most powerful governmental and corporate bodies

...the decision to not tell an entire country that America is spying on every single one of its phone calls has caused outrage from transparency groups including Wikileaks.

We condemn Firstlook for following the Washington Post into censoring the mass interception of an entire nation https://t.co/jTKVNCK5BJ

— WikiLeaks (@wikileaks) May 19, 2014 This was then followed by former-Gawker editor John Cook, who is now the Intercept's top editor: 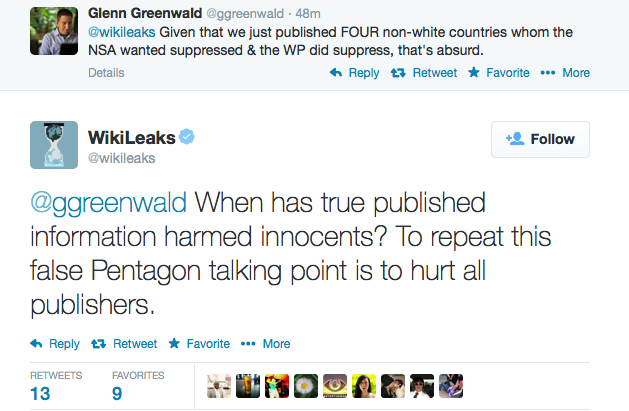 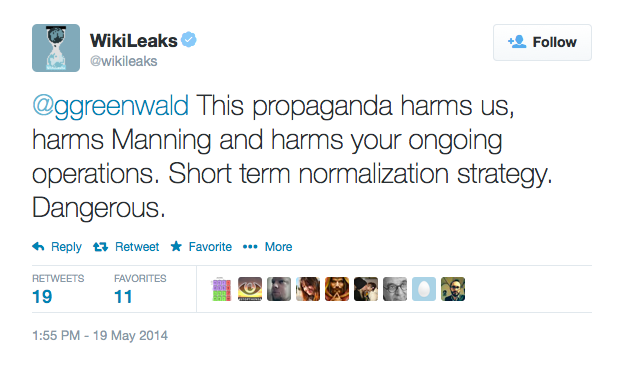 Wikileaks isn't the only former ally that has now turned on Omidyar's quarter billion dollar journalism project. Members of the Anonymous hacker collective have launched a campaign to encourage readers to pirate copies of Greenwald's new book about the Edward Snowden leaks. Anonymous' beef centers around Greenwald joining forces with Omidyar who they hold partly responsible for the "PayPal 14" case.