Why did Greenwald agree to government plea to hold major NSA story but the Post didn't?

For months, Glenn Greenwald and his Omidyar-backed news site, The Intercept, have been trailing their biggest scoop: Details of thousands of Americans who were spied on by their own government. “This will be the finale," Greenwald said. "A big missing piece.”

Weeks passed, though, and the details didn't materialize. On 30th June, Greenwald finally announced his big scoop would land "at midnight," but that deadline too came and went. According to Greenwald, the delay was caused by "last-minute claims" by the US government which had convinced him to delay publication.

Yesterday morning, the Washington Post and Edward Snowden apparently got tired of waiting for Greenwald to get the green light from Uncle Sam. In a stunning report by reporter and one-time Greenwald collaborator Barton Gellman, co-bylined with Julie Tate and Ashkan Soltani, the Post reveals details of 65,000 Americans whose private communications were intercepted by agents intending to spy on foreign suspects.

Nine of 10 account holders found in a large cache of intercepted conversations, which former NSA contractor Edward Snowden provided in full to The Post, were not the intended surveillance targets but were caught in a net the agency had cast for somebody else.

The Post claims that nine out of 10 of those monitored -- providing the NSA with 160,000 emails and IMs, and 7,900 other documents -- were ordinary Internet users, not suspects.

Many [of those] files, described as useless by the analysts but nonetheless retained, have a startlingly intimate, even voyeuristic quality. They tell stories of love and heartbreak, illicit sexual liaisons, mental-health crises, political and religious conversions, financial anxieties and disappointed hopes. The daily lives of more than 10,000 account holders who were not targeted are catalogued and recorded nevertheless...

Scores of pictures show infants and toddlers in bathtubs, on swings, sprawled on their backs and kissed by their mothers. In some photos, men show off their physiques. In others, women model lingerie, leaning suggestively into a webcam or striking risque poses in shorts and bikini tops...

Most of the people caught up in those programs are not the targets and would not lawfully qualify as such. “Incidental collection” of third-party communications is inevitable in many forms of surveillance, but in other contexts the U.S. government works harder to limit and discard irrelevant data. In criminal wiretaps, for example, the FBI is supposed to stop listening to a call if a suspect’s wife or child is using the phone. The data passed by Snowden to the Post includes records which NSA officials had previously insisted he had not been able to access.

As recently as May, shortly after he retired as NSA director, Gen. Keith Alexander denied that Snowden could have passed FISA content to journalists.

“He didn’t get this data,” Alexander told a New Yorker reporter. “They didn’t touch —”

“The operational data?” the reporter asked.

“They didn’t touch the FISA data,” Alexander replied. He added, “That database, he didn’t have access to.” In deciding to hand the entire trove to the Post, Snowden said he had faith in the Post's "sense of civic duty to consult with the government to ensure that the reporting on and handling of this material causes no harm." Neither he nor the Post reporters made reference to the Intercept of Greenwald's plans to publish the information.

So how did Greenwald get scooped by his own source, Snowden, and his former colleague, Gellman? Why did the US government's attempts to shut down the story work on Greenwald and the Intercept but apparently not on the Post?

This might be a good time to remind readers of the words of Intercept staffer Jeremy Scahill who told the Daily Beast...

It's not clear exactly who those White House sources called to silence Greenwald and his boss -- I've emailed Omidyar's spokesperson, and will update if I hear back, but they have always refused to comment on Pando stories.

Still, Omidyar's ties to the White House are well documented. As I wrote in March, both Pierre Omidyar and his wife Pamela were frequent guests of the President, First Lady and senior White House staff prior to the launch of the Intercept.

According to recently released visitor logs, however, neither Mr. or Mrs. Omidyar has been invited back since the Intercept began attacking the US government.  Apparently, though, Omidyar Network still enjoys a close relationship with the Obama White House.

Yesterday afternoon, Mark Ames pointed me towards tweets which show Pierre Omidyar's most senior aide, Matthew Bannick was back at the White House on June 25th (picture below). The occasion was a "Day of Impact" in which he announced that Omidyar Network would be co-investing an additional $100m with the US government, this time on domestic policy programs. 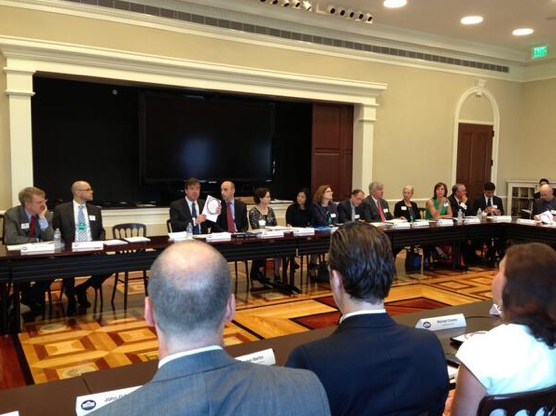 The investment was accompanied by an Omidyar-backed report which "suggested" the government might consider dropping some of the "unnecessary regulatory barriers" preventing private philanthropists like Omidyar from investing their money overseas. (See here and here for Mark Ames' reporting on how Omidyar invested in regime change in Ukraine, and helped to elect India's new Prime Minister.)

Whatever the reason for Greenwald's hesitation in publishing the story, he's remaining tight lipped. At the time of writing, there is no mention of the Post's scoop on the Intercept website which hasn't been updated since 18th June, just before Bannick's White House visit. 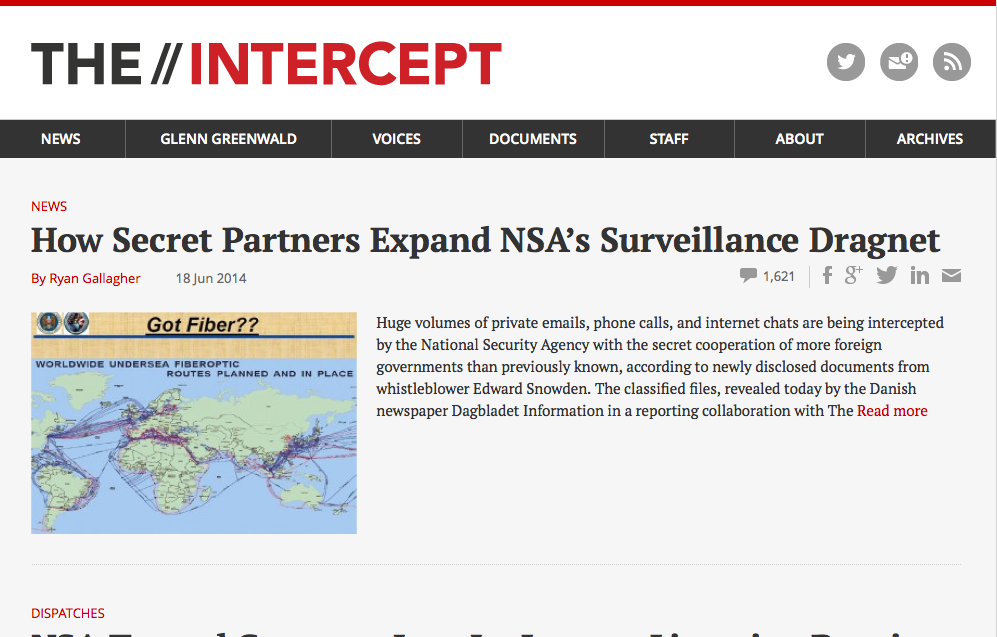 On Twitter, Greenwald has simply retweeted a remark he made back in March where he suggested that the Snowden cache might contain "raw communications of individuals that NSA has collected."