Bezos’ words of solidarity are a good start -- but they're hardly headline-worthy.

From The Amazon Desk

While IBM pledges to stop working on facial recognition technology, Amazon’s Jeff Bezos sits at his computer and trawls his Instagram inbox looking for controversial screenshots that will make people buy more stuff from him. 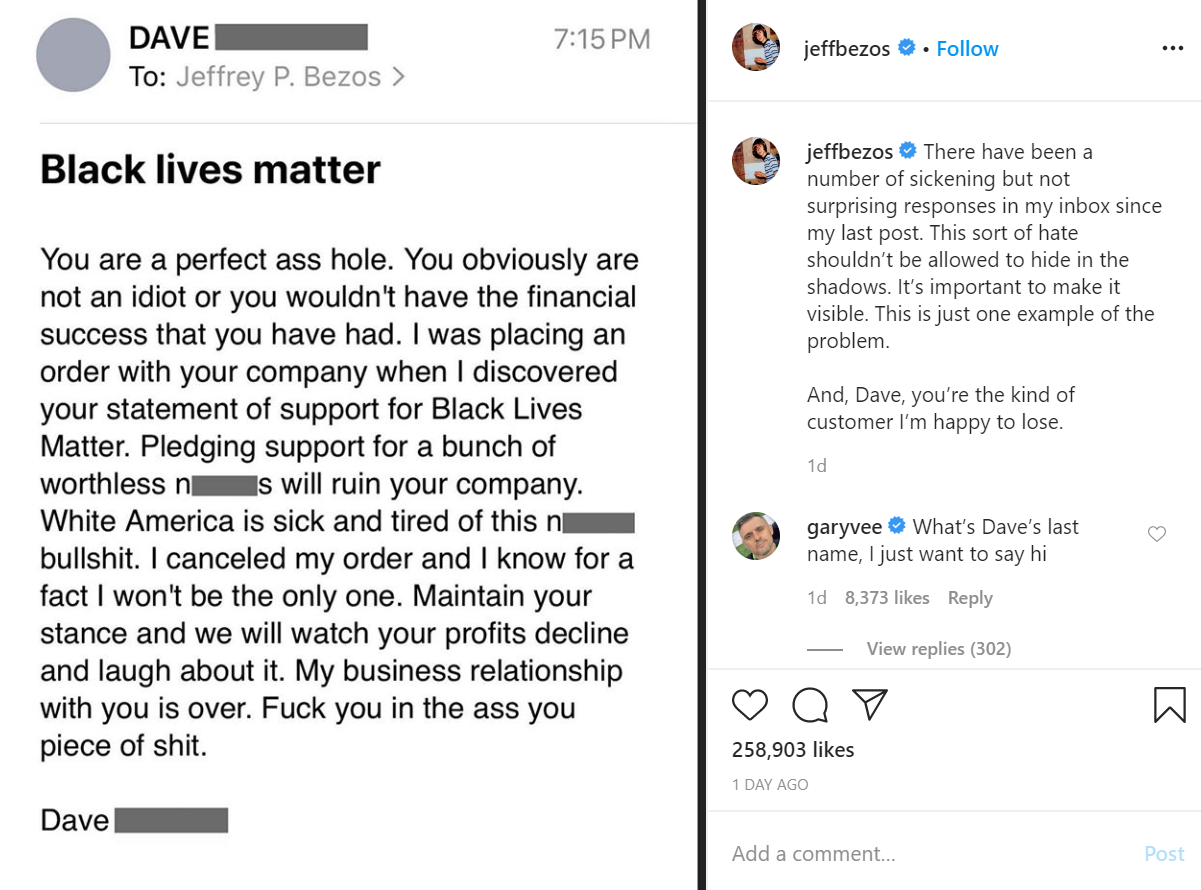 After throwing a ‘Black Lives Matter’ banner up on his website, it looks like Bezos took a few seconds to screenshot an email from ‘Dave’ and throw it up on Instagram. Then, as if he’d just done something utterly heroic, he proudly announced that he was ‘happy to lose’ one of his 112 million Amazon Prime customers.

And it seems to have worked. The flurry of supportive messages immediately started pouring in:

Corporate mainstream media platforms, including Fox News, Business Insider, and CNET, also rushed to his support. The Economic Times has even dubbed him ‘a man of principles’, praising him for taking ‘his support for #BlackLivesMatter a notch higher.’

But not everyone was convinced by Bezos’ statements.

"If Jeff Bezos wants to really put his money where his mouth is, he probably should be providing more internal opportunities for his workers,” Fox Business host Charles Payne told Bill Hemmer Reports yesterday.

He suggested that Bezos should invest in minority-owned businesses destroyed during Minneapolis and across the U.S.

"It would be amazing since they're accused of putting so many of those small businesses out of business in the first place, it's a golden opportunity for them to really show some real sympathy for people who are out there working really hard,” he said.

Bezos’ words of solidarity are a good start -- but they're hardly headline-worthy.

For as long as Amazon continues to sell biased facial recognition software to law enforcement agencies, undermine worker rights, and prop up dangerous companies that separate children from their parents, it will be difficult to interpret his support for the movement as anything more than a publicity stunt.

Because that's exactly what this is -- a publicity stunt.