The Quibi that could have been

From The video Desk

“We’re a startup” Meg Whitman, Quibi’s CEO, said on stage during her keynote at the IAB Annual Leadership Meeting earlier this year in Palm Desert, 2 months before the fledgling service’s formal launch.

It’s a curious way to think of and describe a company that by that point had raised $1.75 billion and had no shortage of star power behind it. The brainchild of Jeffrey Katzenberg, a media and entertainment legend, Quibi’s CES keynote featured a who’s who of dream launch partners: from Google Cloud on the technology side, various creative A-listers, through Pepsi on the advertising side, to T-Mobile’s president and COO Mike Sievert enthusiastically announcing they will roll out Quibi to their 68 million customers. On stage in Las Vegas he professed:

Fast forward a few months when the reception to Quibi can, at best, be described as lukewarm. In the first weeks of Quibi’s life mobile analytics company Sensor Tower reports only around 2.3 million downloads. The app remains conspicuously absent from any of the top app download charts within a month and change of its very public launch. This type of mobile download result for a much hyped mobile-only app doesn’t bode well and certainly doesn’t convey the pre-launch enthusiasm that Quibi and their partners were expecting. Dorothy - we’re very far from insatiable demand.

Jeffrey Katzenberg identified an interesting culprit in a post-launch interview for the New York Times:

“I attribute everything that has gone wrong to coronavirus. Everything. But we own it.”

As tempting as it may be to blame the virus and other externalities, the call was coming from inside the house all along. Mobile-first competitors like TikTok and Snapchat experienced explosive growth during the Coronavirus Pause clearly demonstrating that the virus had little to do with how users consumed media during this time. In the spirit of Quibi’s content brevity their go-to-market challenge can be summed up in 10 words:

Quibi brought a Hollywood go-to-market strategy to a TikTok world.

Mobile companies (and startups in general) tend to be scrappy in their customer acquisition efforts: they focus on performance advertising, utilize digitally native & mobile-first platforms, and whenever possible rely on earned media, incentivized word-of-mouth marketing, and users’ own social graphs/contact lists to extend their reach. The emphasis is on measurable, mainly self-serve channels where creative and message iterations happen quickly: in days, if not hours.

Quibi on the other hand chose a different path - to date, their extremely generous estimated $470 million marketing budget seems to have mostly been levied on top of funnel, above-the-line marketing. There was a confusing Super Bowl ad which cost $5.6 million just for the media buy - or an entire solid Series A investment for an actual startup; there were also pricey ads around the Oscars and similar activities that all lean towards the non-addressable, harder to measure, harder-yet to iterate on channels and formats.

The pitch to advertisers on the surface seemed to be a runaway success: 6 months before launch, Quibi announced they sold out their entire first-year inventory to the tune of $150 million of upfront commitments from an intentionally small number of Tier-1 brands. Not bad for a new, unproven advertising format and platform. However, that really comes out to only about a $15 million commitment per brand - at the level of annual spend these brands have, that’s slightly more than an experimental budget.

The pitch to users, on the other hand, fell flat. Quibi’s own numbers from early May listed 1.3 million active users about 30 days into what would have been a 90-day free trial. If people don’t seem to be buying you when you’re free, can you realistically expect them to buy when you shift to paid? In Hollywood terms, this is pointing towards the classic signs of a box office flop.

It’s not often that we get such a vivid and public example of how critical the initial go-to-market strategy can be. If the GTM is wrong even an extremely generous 9-figure marketing budget will not be enough. Launching a new media format is never easy but Quibi’s in-market execution left a lot to be desired and resulted in multiple truly head-scratching efforts. Let’s break down some concrete things that they could have done instead and how a different go-to-market strategy could have yielded significantly better results. There are 5 core challenges that every go-to-market strategy needs to address and we offer up 14 prescriptions for what they could’ve done differently. Let’s go!

Whenever you’re tackling the launch of a new product or service, step one in a go-to-market strategy is to define what that product is in the market that you’re entering. Quibi simultaneously aimed to be:

The first challenge comes with articulating how this new and unique approach to storytelling and content quality is worth not just the time and attention but also the $5 or $8 per month. In a world of content abundance, content alone is not enough for a winning proposition. Per analysis from Parrot Analytics, content quality may have been part of the problem: in spite of Quibi’s claims of excellence, their shows appear to be registering as squarely mediocre: 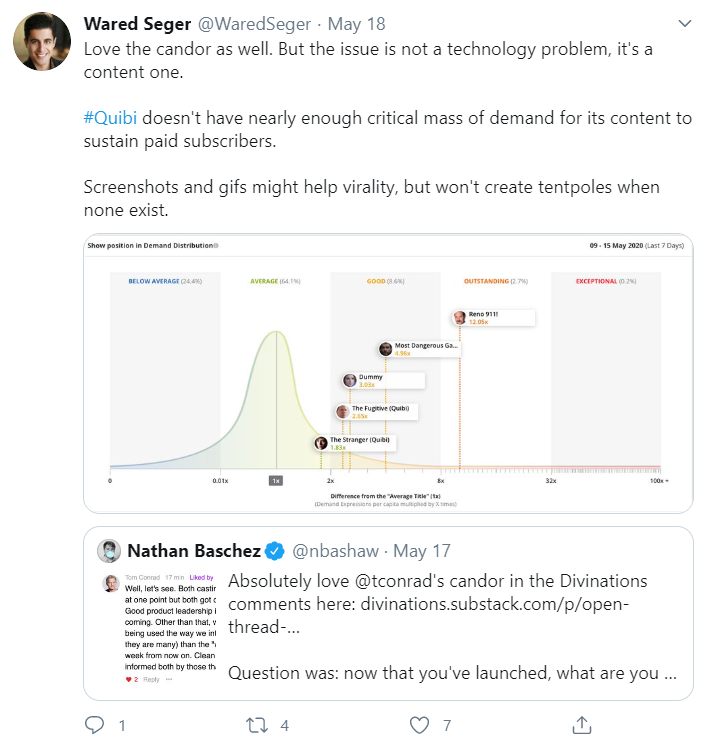 Challenge #2: who is this for?

The US will have about 72MMM people in this demographic in 2020. The media diet of this cohort is well-understood: while they like television content, they increasingly don’t watch it on traditional linear TV. As digital natives they're more open to platforms and newer formats from Youtube through Facebook/Instagram to Snapchat. They’ve grown up in the heyday of social media and influencer culture and turned Netflix, Youtube, and Uber into verbs. If this is the core audience you’re going for, a Super Bowl buy doesn’t seem to be the place you’ll find it.

Challenge #3: how do you monetize it?

As the great unbundling of video content continues, a fair question to ask is how many paid content subscriptions does a typical user support? While a $5 per month fee may seem low, once you add on a few services the pricing starts tracking closer to old basic cable numbers. Like with written content, the reality for most users will be that they’ll pay for <5 individual entertainment services. With content in abundance, you won’t really miss a specific movie or show unless you have very compelling cultural reasons to tune into it. Quibi starting with a walled garden only approach seems to ignore the way other walled gardens have gone to market: you need to convince everyone that the garden is worth visiting, open the gates, lure everyone in, and then build a wall.  It reminds me of the ‘if you build it they will come’ quote from the 1989 film Field of Dreams, in which a farmer (played by Kevin Costner) hears voices urging him to build a baseball field so that the legendary 1919 Chicago White Sox team would appear and so would an audience willing to pay to see them. Quibi built a field, but for a sport no one knows how to play, and then essentially wanted to charge fans to come watch it.

Challenge #4: who is my competition?

In pre-launch interviews about the service, Mr. Katzenberg made a point of illustrating that Quibi isn’t participating in the much hyped streaming wars. Their competition weren’t the paid premium streaming services like Netflix, Disney+ or HBO Max (which had a similar go-live date). The distinction that Mr. Katzenberg drew was that while other streamers were competing for the television set and living room, Quibi was competing for the phone. It may have come as somewhat of a surprise then that, when asked about TikTok’s growth during the pandemic, Mr. Katzenberg immediately compared his company to Netflix, deflecting from the TikTok comparison.  When you hear Hollywood A-list, production budgets of $100,000 per minute, and premium subscriptions who are the first competitors that come to mind? This was another indication that Quibi seemed to be conflating business models and not readily understanding the breadth of their competition; if Quibi is fighting for the phone, it’s reasonable to assume that its competition isn’t limited to just video content but other forms of entertainment, too. Not only are you effectively competing with the streaming giants but you’re also going up against casual mobile gaming, while your go-to-market strategy doesn’t effectively address either competitive group.

If you’ve downloaded Quibi your initial reaction to using it is likely mostly positive - the sign-up flow is fairly smooth even if the initial splash screens leave something to be desired (instead of generic icons why not use the star-power of its A-list talent here?). The player works generally well and the cards layout for browsing shows is intuitive for swiping and tapping. So far so good.

Once you start watching content it doesn’t take long to start getting repetitive ads. This seems by design -- Quibi restricted their launch ad partners to 10 advertisers with 24 brands. The only ad unit available is pre-roll that runs before an episode so a brand gets to effectively sponsor each episode of a show. Given the low number of advertisers, in practice this means that with moderate watching you’re seeing the same ads over and over and over again. After two episodes of The Dangerous Game (starring A-listers Liam Hemsworth and Christoph Waltz) I was tired of Taco Bell.

The biggest gap is the mobile-only content with limited sharing ability. You can’t take screenshots in the app. You can’t (yet) watch on TV, although Quibi is working on fixing this: which means you can’t really watch this content with someone else. Is the expectation then that every person in your household needs to sign up (and pay) for their own Quibi account?

The big question here is if this show could have found a more vocal and engaged audience if Quibi did more direct, audience-based marketing to promote it. The show’s host Chrissy Tiegen has an extremely engaged social media audience that just doesn’t seem to have translated to interest in Quibi. Rather than Superbowl ads touting concepts over content, promoting show snippets, cultivating email lists of interested fans, curating watch parties, investing in tweet-alongs, and similar direct tactics could have pushed this and other marquee shows to the good/outstanding rankings.

“We’re a start-up,” Mr Katzenberg also echoed in a Vulture explainer.  “As soon as you go out and try to be all things to all people, you end up being nothing to anybody.”

Ironically, that’s precisely what their go-to-market strategy achieved. Keep that in mind the next time a company with $470 million to spend on marketing comes along, startup or not: if the fundamentals of a go-to-market strategy are flawed, no amount of money poured on top can fix it without an actual re-evaluation of strategy.

This article was originally published by Sparrow Advisers