'Picking a fight' with Apple was always Basecamp's marketing strategy

The Hey email app makes tons of money, and Apple is still a major gatekeeper

From The Apple Desk

“If you think a competitor sucks, say so. When you do that, you'll find that others who agree with you will rally to your side. Being the anti-______ is a great way to differentiate yourself and attract followers.”

This is an excerpt from Rework, a marketing book written by Basecamp co-founders Jason Fried and David Heinemeier Hansson. It’s an outline of one of their key principles, which they call “picking a fight”.

"Having an enemy gives you a great story to tell customers. Taking a stand always stands out. People get stoked by conflict. They take sides. Passions are ignited. And that's a good way to get people to take notice."

Over the past week, they have been putting this lesson into practice. Hey, the email app developed by Basecamp, has been embroiled in a fierce standoff with Apple. Dramatic as ever, Basecamp CTO David Heinemeier Hansson Tweeted that he’d “burn this house down myself, before I let gangsters like that spin it for spoils”.

Before this, the only time people really discussed Hey was when they were asking each other, “Why the hell would anyone pay for email?” But the drama got Hey way more exposure than any ad campaign they could have run. And now, everyone’s desperate for the opportunity to pay for email.

Publicly calling out Apple was a strategic decision. For bonus points, it happened right before Apple’s annual developer conference, the World Wide Developer Conference (WWDC). According to Hey’s most recent blog post, Apple’s main objection was, “You download the app and it doesn’t work, that’s not what we want on the store.”

But just before WWDC kicked off, it was announced that a resolution had been found -- a free option of the Hey app allows users to sign up for a 14 day free trial, using a randomized @hey.com email address.

Basecamp was painted as a crusader in the developer vs. corporate tech giant battle. But it hasn’t really changed anything. Apple’s treatment of developers is certainly a point that needs addressing, but the issue will be treated as just another marketing stunt -- because that’s all this ever was. 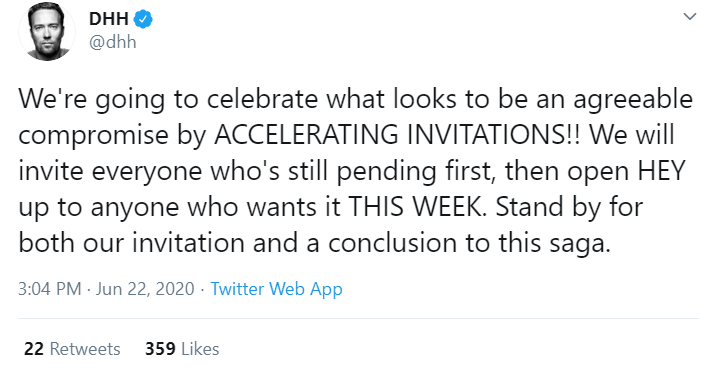 But the issue shouldn’t be swept under the rug. Apple remains a major gatekeeper -- and it’s under investigation by the European Commission for that exact reason.

"Mobile applications have fundamentally changed the way we access content. Apple sets the rules for the distribution of apps to users of iPhones and iPads. It appears that Apple obtained a “gatekeeper” role when it comes to the distribution of apps and content to users of Apple's popular devices. We need to ensure that Apple's rules do not distort competition in markets where Apple is competing with other app developers, for example with its music streaming service Apple Music or with Apple Books. I have therefore decided to take a close look at Apple's App Store rules and their compliance with EU competition rules.”

While Basecamp celebrates and ramps up their profits, smaller developers are still left wondering why Apple can tell businesses how to interact with their own customers, and why they have to hand over 30% of their revenue to Apple just to have the privilege of using their platform.

UPDATE 23/06: Yesterday, Apple announced two major changes to how it will handle its app review process with third-party developers:

Additionally, two changes are coming to the app review process and will be implemented this summer. First, developers will not only be able to appeal decisions about whether an app violates a given guideline of the App Store Review Guidelines, but will also have a mechanism to challenge the guideline itself. Second, for apps that are already on the App Store, bug fixes will no longer be delayed over guideline violations except for those related to legal issues. Developers will instead be able to address the issue in their next submission.

It remains to be seen how easy it will be to successfully appeal decisions, but at least bug fixes will no longer be delayed. Hopefully this is just the start of a fairer set of business practices for developers.