Twitter censored DDoSecrets and made BlueLeaks an even bigger deal

“Twitter's ban is excessive, especially their decision to prevent anyone from tweeting a link to any of our pages. That's a lot more disturbing than just banning our account."

Twitter is making it increasingly clear that it is clamping down on what it allows to be published on its platform.

The wave of Black Lives Matter protests that followed the killing of George Floyd has brought some of the worst aspects of the U.S. police force to worldwide attention.

Things blew up even further on Juneteeth, when journalist collective Distributed Denial of Secrets (DDoSecrets) released 269GB of potentially sensitive law enforcement files -- the equivalent of 10 years of data from over 200 police departments -- to the public.

The release has been dubbed ‘BlueLeaks’. DDoSecrets accredited Anonymous, the hacker collective, for finding the data. 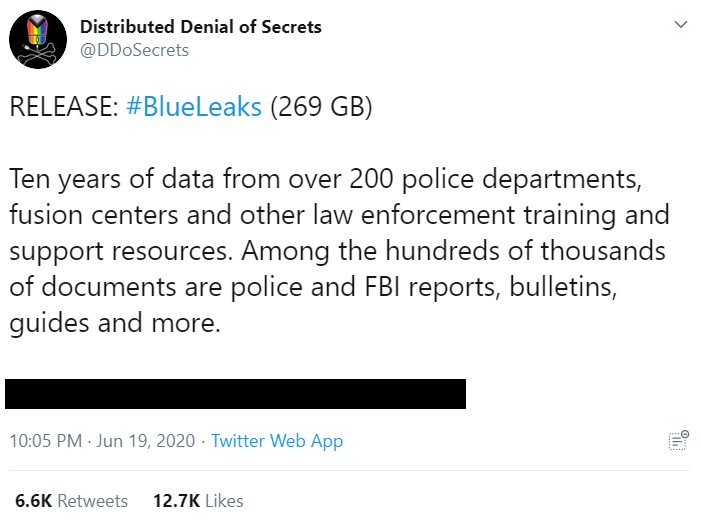 The documents reveal what information the police have on people -- it’s even searchable by police badge number.

The result is shocking.

The leak revealed incidents of the FBI forwarding Tweets they deemed “threatening” to police departments, classifying protest medics and lawyers as “extremists”, and Google providing detailed information about its users on request. 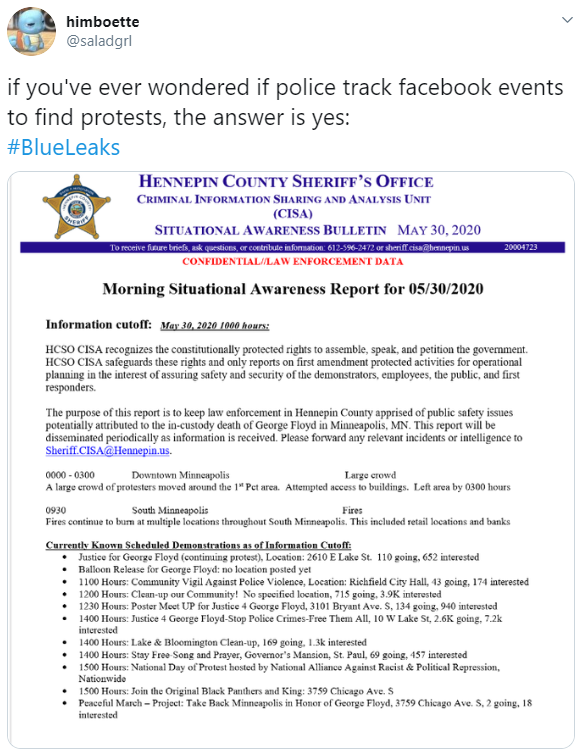 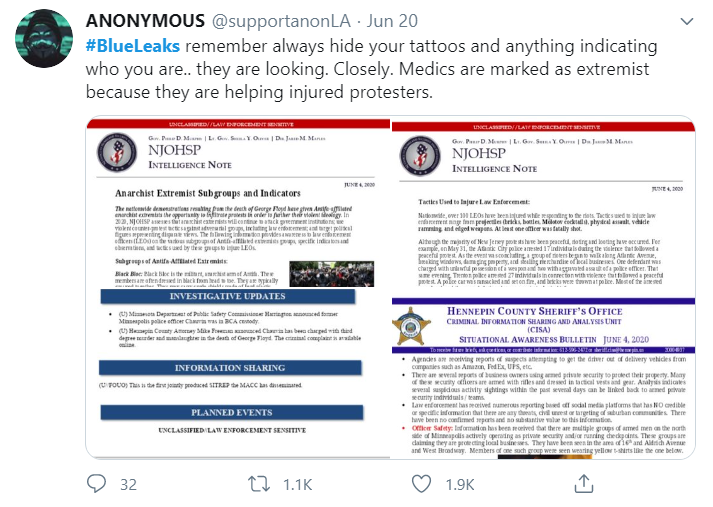 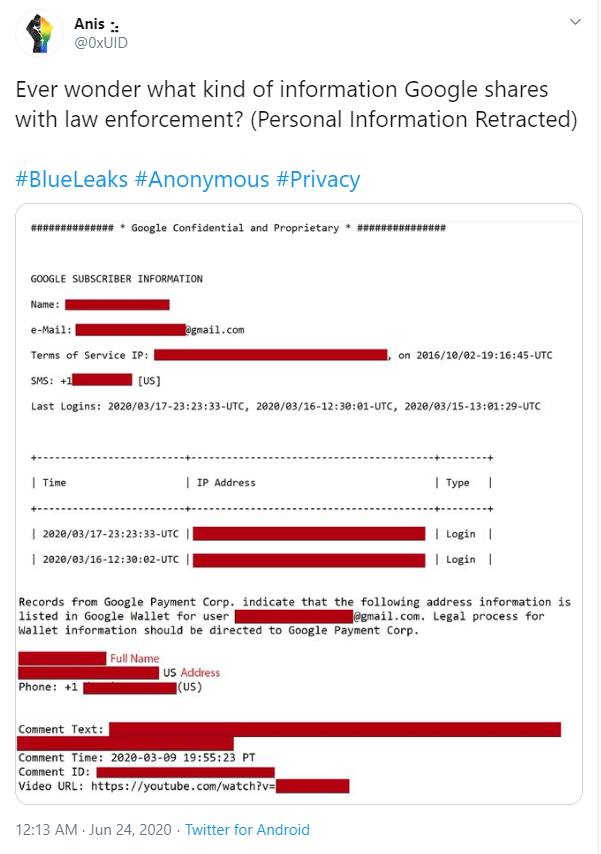 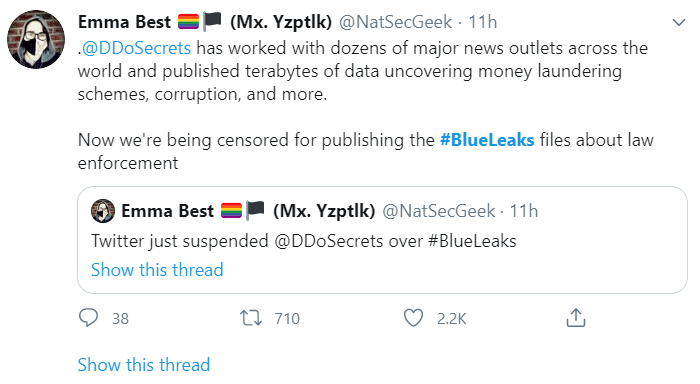 According to ZDNet, who first reported the ban, he DDoSecrets account has been permanently suspended for violating the company’s distribution of hacked materials policy, updated in March 2019, that prohibits accounts from sharing “content obtained through hacking that contains private information, may put people in harm or danger, or contains trade secrets.”

Best also reported that another DDoSecrets member has been banned for tweeting a screenshot of a BlueLeaks document that did not contain any personally identifiable information: 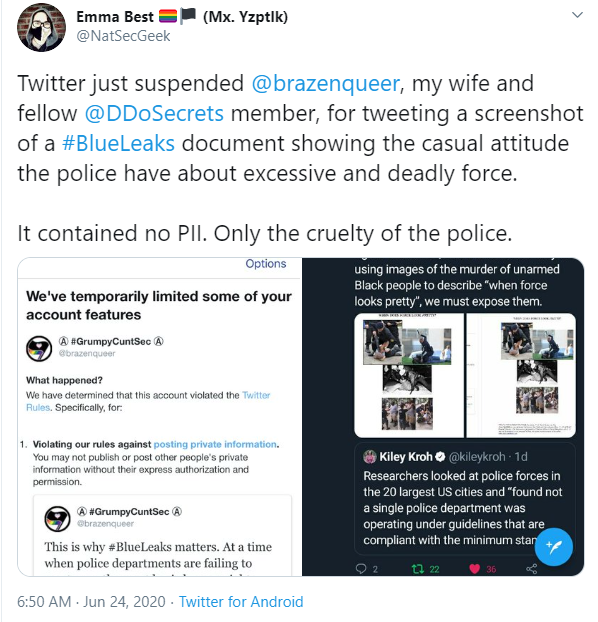 Why BlueLeaks is such a big deal

“It's the largest leak of US law enforcement data, and it lets people look at policing on the local, state and national levels. It shows how law enforcement has reacted to the protests, government handling of COVID, and a lot of things that are completely legal and normal and horrifying,” Emma Best, founder of DDoSecrets, told Pando.

According to KrebsOnSecurity, the leak “stems from a security breach at a Texas web design and hosting company that maintains a number of state law enforcement data-sharing portals,” called Netsential.

“Stewart Baker, an attorney at the Washington, D.C. office of Steptoe & Johnson LLP and a former assistant secretary of policy at the U.S. Department of Homeland Security, said the BlueLeaks data is unlikely to shed much light on police misconduct, but could expose sensitive law enforcement investigations and even endanger lives.”

“I think it misses the point and very narrowly defines "misconduct" as "illegal behavior." A lot of unacceptable behavior from police is not only legal, but sometimes encouraged or standard practice,” they said.

“The current protests are partially a response to standard things the police do and which historically hasn't been treated as misconduct. Most people don't understand how the police operate, and like the Panama Papers and #29 Leaks I think some people are surprised at just what is legal and standard, and that a lot of these things aren't necessarily considered misconduct.”

The 2016 Panama Papers scandal leaked 11.5 million documents detailing financial and attorney-client information for almost 215,000 offshore entities that had previously been kept private. Offshore business entities are legal, but it was found that some Mossack Fonseca shell corporations were being used for illegal purposes. The 2019 #29 Leaks scandal, which was also made public by DDoSecret, exposed the secret owners of 400,000 anonymous companies over a ten year period from 2008 to 2018.

“I'm also pretty skeptical about claims of endangering police lives, since they already make a huge deal out of that while the reality is that police officers are much less likely to die (and have much better support systems for the surviving families) than pizza delivery drivers,” said Best. “How many people, if you said "doing [X] would be as dangerous delivering a pizza" would refuse for safety reasons?”

Pizza delivery has previously been called out as “one of the most dangerous jobs in America”. Back in the 1970s, Richard Davis, former US Marine and pizza delivery driver, developed a bulletproof vest after being involved in a pizza delivery that turned into a shootout when he was confronted by armed robbers. His company, known as Second Chance, pioneered kevlar body armor.

“If publishing the files puts the police in as much danger as pizza delivery drivers, I'll be able to sleep just fine,” said Best.

“Twitter's ban is excessive, especially their decision to prevent anyone from tweeting a link to any of our pages. That's a lot more disturbing than just banning our account, which itself is very curious since accounts like @Ragnarlocker (ransomware leaks) and WikiLeaks continue to operate unmolested,” said Best.

In 2016, WikiLeaks took to Twitter to leak its Democratic National Committee hack. In 2017, it used the platform to leak details about CIA hacking programs as part of its Vault 7 series. Both of these Tweets, and the WikiLeaks account itself, which stands at 5.6 million followers, remain untouched by Twitter.

This is a stark contrast to Twitter’s obvious desperation to silence BlueLeaks. But given Twitter’s recent policing of its platform, I wouldn’t be surprised if they were just waiting for a reason to get rid of WikiLeaks too.