The trouble with platforms

Why oases may be a better metaphor for walled gardens

From The Big Tech Desk

The Artist formerly known as Google, Amazon, Facebook and Apple didn’t get to the top of the market cap charts overnight. These 4 companies together are worth nearly as much as the remainder of the companies that make up the top 20 by market cap.

Although we think of them as technology companies this increasingly seems like a legacy definition. To get to a better one let’s look at some of the less obvious things The Big 4 have in common:

While Apple takes great effort not to play in the advertising ecosystem directly, last year it enabled an ecosystem of $45B in in-app advertising. Here’s how Apple sees its total economic impact, per recent research from the Analysis Group:

Facebook’s founder and CEO Mark Zuckerberg in congressional testimony stated that he considers Facebook to be a technology company. Facebook’s revenue tells a different story:

Can a company that monetizes almost exclusively through advertising be labeled  as anything other than an advertising company?

How did we get here? Let’s look at the go-to-market playbook for platforms:

It worked extraordinarily well: according to the annual IAB/PwC Internet Ad Revenue Report the top 10 largest companies command a whopping 76.6% of all advertising revenue.

Without platforms, there is barely any advertising industry. They have built such large moats that even if a new competitor shows up it will be easy to neutralize, acquire, outprice, or outperform due to sheer size and market dominance. And they’re in the process of deepening the moat’s trench and raising the drawbridges.

As platforms gain more market power they’re effectively crossing one of the fundamental tenets of the internet: that open systems are better than closed. We often talk of platforms as walled gardens but a different metaphor may be more apt:

What if platforms are more like oases in a desert?

We’re moving from media and commerce ecosystems that featured many independent, sustainable players into a small number of self-contained platform oases. There’s still life outside of a walled garden; outside of an oasis the air is arid and you’re lucky if you run into a tumbleweed here or there. That is the commercial effect that platforms are creating, intentionally or not. Is this the industry landscape that we want?

Leaving the search for better metaphors aside, there are immediate considerations for every ecosystem player that interacts with platforms today. Let’s try this in a choose-your-own-adventure style.

This conversation is very timely for this cohort as we seem to be at the cusp of a bit of a marketer rebellion against Facebook. Over the past few days several high-profile brands including Ben & Jerry’s, The North Face, Patagonia, REI, and big budget brands like Verizon and Unilever have announced they are pausing spend out of concerns for what should be thought of as brand safety. 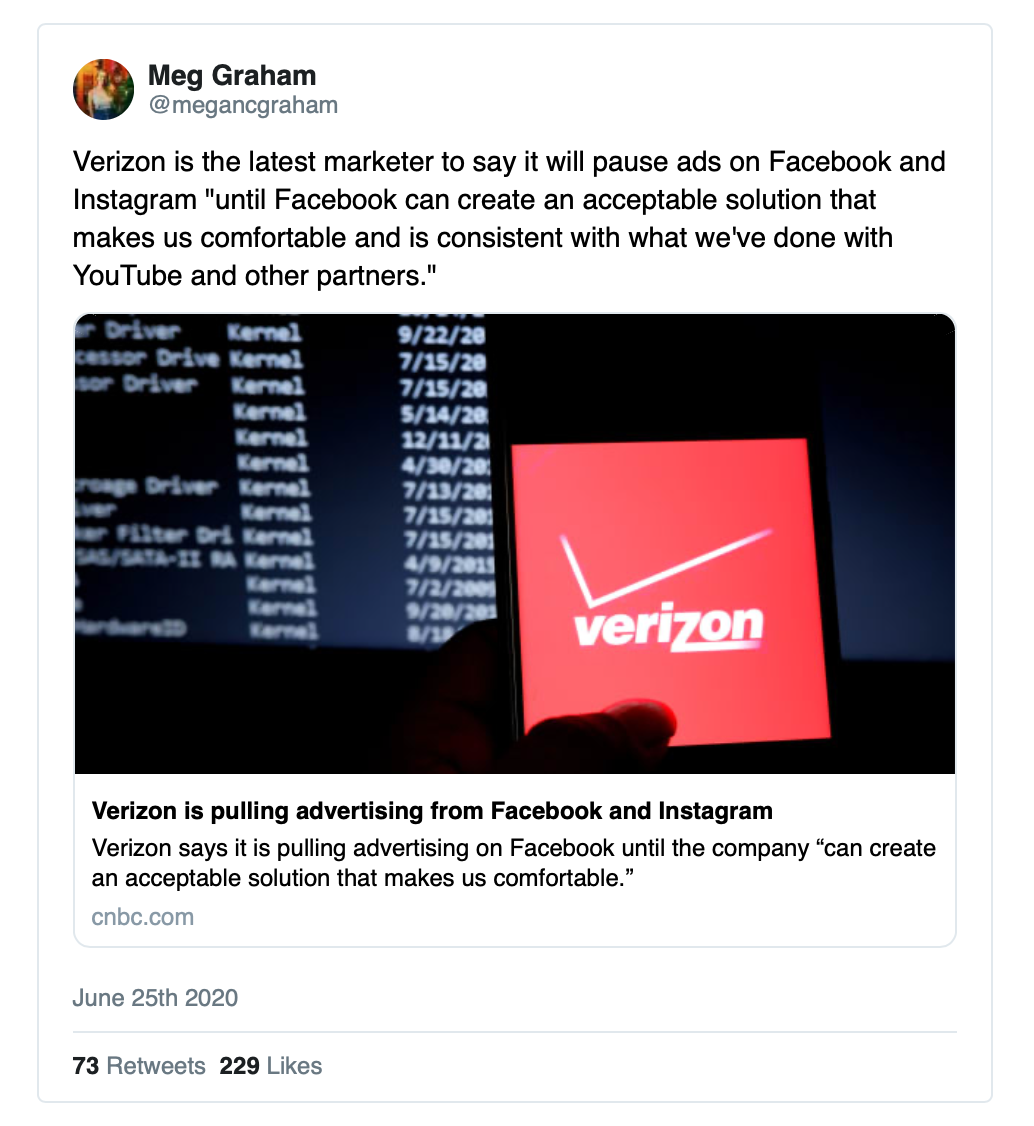 Similar boycotts in the past came and went without much long-term change: eg. the 2017 and 2019 YouTube boycotts that started with a bang and rather quickly ended with a whimper and a prompt return to buying as usual. No wonder: Facebook has over 8 million advertisers and is unlikely to feel much commercial pain even if relatively large and influential spenders divert their spend elsewhere for a quarter or two. The more curious question is if more brands pause spend on platforms where will they divert those budgets to?

To really make sure things are different this time brands and marketers should focus on:

Media owners tend to approach platforms symbiotically: as a way to distribute more content, reach more users, and generally have a ‘rising tide lifts all boats’ type of commercial scenario. In reality, it’s more of a predatory relationship: walled gardens control the algorithms that expose content to their users, and have a long history of showing misleading numbers that media owners then use to make key business investment decisions (who can forget the ‘pivot to video’ era and the many media casualties left in its wake). Perhaps the biggest challenges for media owners is the very nature of content on platforms: if you’re producing content that stands side by side in someone’s feed next to the concoctions of Macedonian teenagers whose sole goal is to game engagement, what chance do you have? Whose rules are you playing by?

What can you as a media owner do?

Since platforms command such a significant portion of ad dollars today, the obvious solution seems to be to focus on solutions that make using platforms easier and more worthwhile. It’s easy to see how an advertiser spending 9 figures per year on a platform may benefit from better insights into the efficacy of that spend or how automation of creative may shave off hundreds of employee-hours while increasing the likelihood of finding hyper-performing versions of ads. The challenge here is differentiation: while adtech has been the beneficiary of abundant funding is there really room for 50+ CDPs or 20+ DCOs in the market or are some of these sectors approaching commodity?

Internet old timers will gleefully remind us all of the times before Facebook and Amazon and friends. Google wasn’t the first search engine to emerge, yet it’s the only one that became a verb. Snap and TikTok are great examples of next-gen alternatives to the current platform establishment but they still monetize in more or less the same way as the incumbents. What new platforms may emerge if the main monetization engine shifts away from user attention into something new?

For consumers, platforms are generally a pretty good deal. In content terms they’re the easy button: they push content you’ll “like” to you. They’ll surface things you want. They'll help you find new things to enjoy. They remove a lot of friction from your day-to-day. And in the process they may inadvertently affect elections, the political discourse in your country, or influence response to public health issues.

Platforms essentially turn consumer attention into money - as long as consumers are engaging on platforms this equation will work in the platforms’ favor, compounding lock-in effects. The easiest way to illustrate this may be through share of time and share of wallet calculations. If you’re an Amazon Prime subscriber, how much of your money is now no longer going to your local mom & pop stores or national chains because it’s easier to buy on Amazon? If you ‘get your news on Facebook’ which local news outlets aren’t you funding? Are you ok with these types of trade-offs?

The first step consumers should take to understand their relationship with platforms is to audit where their attention is going and what share of one’s time do individual platforms command. The perfect illustration for this challenge comes courtesy of Genius Steals’ Faris Yakob (we’re big fans!) and their media diet pyramid:

Platforms, as we’ve established, aren’t just about media. But for most consumers the starting point - the main hook, if you will - is usually media related. Once consumers understand the impact platforms have on their media choices, they can start to look at what impact this relationship has across all of their commercial choices (so a ‘wallet audit’ should follow a media audit). If consumers vote with their attention and wallets, options other than scorched earth desert with a few oases may begin to emerge once again.

Are today’s platforms an all or nothing proposition? If you don’t like one area of what a platform does is the only option (as a consumer, as a brand, as an investor, and as a technology company) to opt out of the platform altogether? Consider Spotify’s recent move into content: Spotify is positioning to be an audio platform for all of your audio needs. If you don’t want to support certain types of content or behaviors on Spotify, is your only option to cancel your subscription?

For more, check out Sparrow Advisers