The guy who makes cars explode wants to put a chip in our brains. What could go wrong?

From The Odd Futurism Desk

"If you can't beat 'em, join 'em," is the official mission statement for Neuralink, according to Musk's tweet on July 9.

A few days ago, Musk hopped on Twitter to answer some questions about Neuralink, a brain-machine interface (BMI) he invented in 2016 to "connect humans and computers" to try and help humans keep up with advanced artificial intelligence.

When Neuralink went public in July 2019 with $158 million in funding, it announced that it was working on a "sewing machine-like" device capable of implanting tiny threads into the brain, and demonstrated a system that read information from a lab rat.

The company anticipated to start experiments with humans in 2020 -- that's now, if you've lost track.

So far, there has only been one official presentation released to the public, and that was back in July 2019. In what sounded like part of a science fiction horror show, Musk claimed that his technology would "give us the option of merging with AI".

Neuralink aims to enable the "restoration of sensory and motor function and the treatment of neurological disorders". In a Wait But Why article published back in 2017, Musk said that the first people who could benefit from the technology would be those who could not move their limbs as the result of a severe brain injury or a stroke.

"It would be it basically implanted in your skull. It would be flush with your skull, so you basically take out a chunk of skull, put the Neuralink device in there. You’d insert the electrode threads very carefully into the brain and then you stitch it up and you wouldn’t even know that somebody has it. It can interface basically anywhere in your brain. It could be something that helps cure say eyesight, like returns your eyesight even if you’ve lost your optic nerve type of thing," Musk told Joe Rogan in a podcast on May 2020.

In a recent tweet, he also claimed that it would be used to help those suffering from obsessive compulsive disorder. 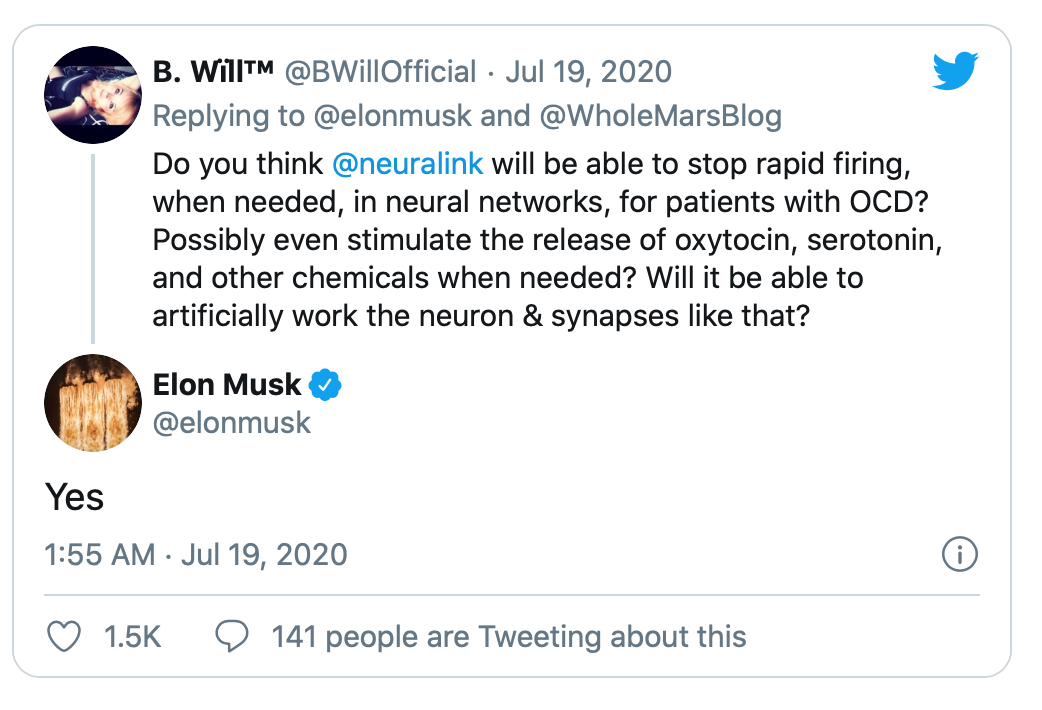 This seems like a lot of use cases for technology that has yet to be widely tested. Then again, Musk has a long history of making bold claims that don't amount to anything.

Scientists still have an extremely limited understanding of the brain -- and they definitely don't understand enough to start playing around with hormones and neurotransmitters like oxytocin and serotonin.

One user asked Musk if a chip designed by his brain interface company, Neuralink, would let us stream music straight to our brain.

Given that we barely understand how auditory information is processed in the brain, this is another huge stretch. 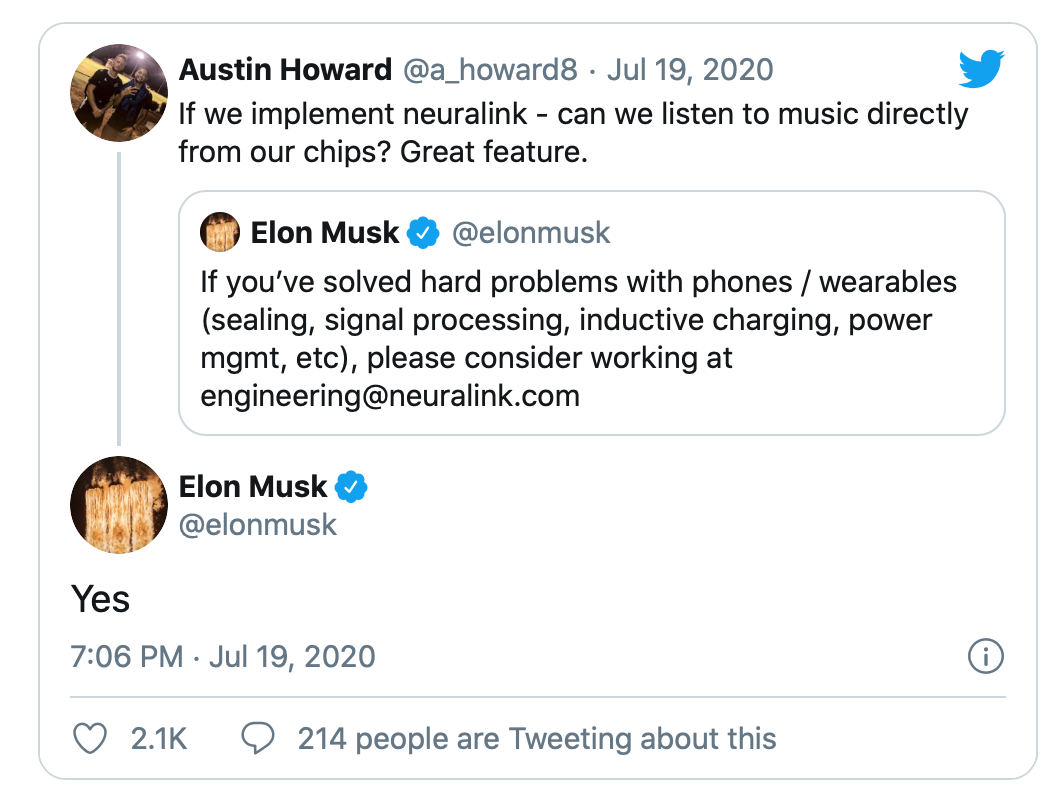 If you can listen to music then you can probably listen to ads too, right? I can't help thinking of this Futurama scene:

If you decide you are going to drill holes into your skull and hook Spotify up to your brain, it’s probably worth paying the premium to skip the ads.

But even if Neuralink does end up doing everything it's supposed to, it’s going to be a stretch to get regulators to regulate tech that literally links to your brain. We can barely even regulate the internet.

Musk is set to provide an update on the progress of Neuralink on August 28.