Breaking down a “data visceralization” with principles from Data Feminism, a book by Catherine D’Ignazio and Lauren Klein.

From The Employment Desk

As articulated by authors Catherine D’Ignazio and Lauren Klein, Data Feminism is “a way of thinking about data, both their uses and their limits, that is informed by direct experience, by a commitment to action, and by intersectional feminist thought.”

It has seven core principles:

In this post, I will illustrate some principles from Data Feminism by breaking down this unemployment chart recently published by ProPublica.

To apply the first two core principles from Data Feminism (examine power and challenge power), we first need to understand what people in power have to say about unemployment right now.

While the US is currently in its worst economic downturn since the Great Depression, with the worst still yet to come, recent coverage of US unemployment has been suspiciously optimistic and short-sighted. Stories tend to emphasize slight decreases in the overall unemployment rate, new added jobs, and hiring activity. These narratives obscure the economic crises currently experienced by the most vulnerable in society.

almost half of the US population is without a job, even though the unemployment rate is around 11%

The unemployment rate is notoriously uninformative, in large part because the denominator only includes people who filed for unemployment. That is why almost half of the US population is without a job, even though the unemployment rate is only around 11%. The overall unemployment rate poses as what D’Ignazio and Klein call a “rational, scientific, objective viewpoint from a mythical, imaginary, impossible standpoint.” A number like 11% sounds empirical, when in reality the choice of metric is subjective. Or, as explained in chapter 3 of Data Feminism, “the view from nowhere is always a view from somewhere.” So where is this view that highlights 11% metric, and who does it benefit? 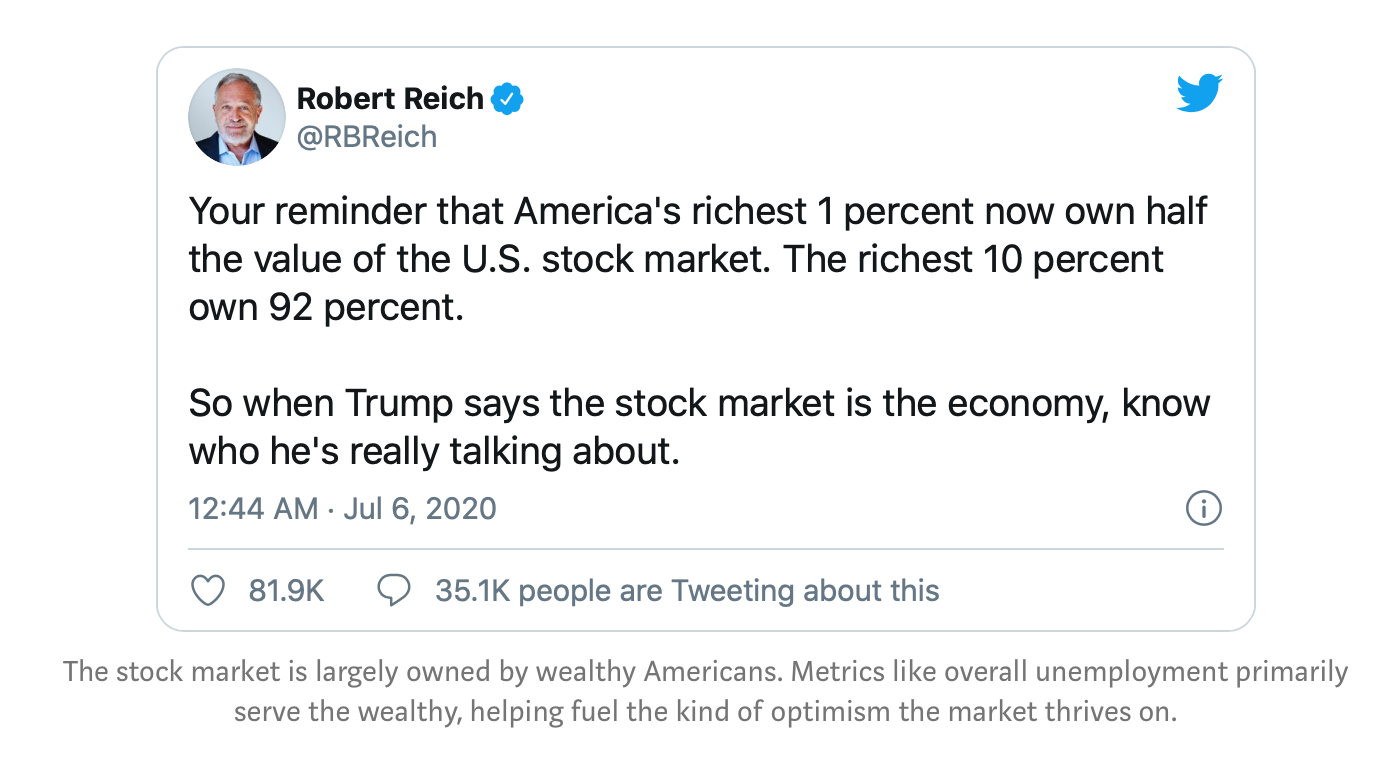 A view that highlights unemployment rate is primarily a view from power. It seeks to reassure the wealthy that everything is recovering, stabilizing, and under control, driving the kind of optimism needed to fuel the stock market (half of which is owned by the richest 1 percent of the US, as Robert Reich points out). Here are some numbers that are ignored and obscured in the overall unemployment rate:

“Counting is power,” as the authors put it, and the principles of Data Feminism encourage us to ask: why are crucial numbers like these not being counted? What are the politics of what is being counted? Why are people in power so quick to focus on the overall unemployment rate?

The subjective decision to focus on overall unemployment represents a form of “power knowledge,” which is similar to propaganda. Power knowledge supports narratives that help institutions and people in power, rather than pursuing truth and liberation. As a counterexample, let’s look at a “data visceralization” that conveys more truth about unemployment in the US.

Just yesterday, ProPublica published a story by Lena V. Groeger, titled “What Coronavirus Job Losses Reveal About Racism in America.” Here is what the centerpiece chart looks like: 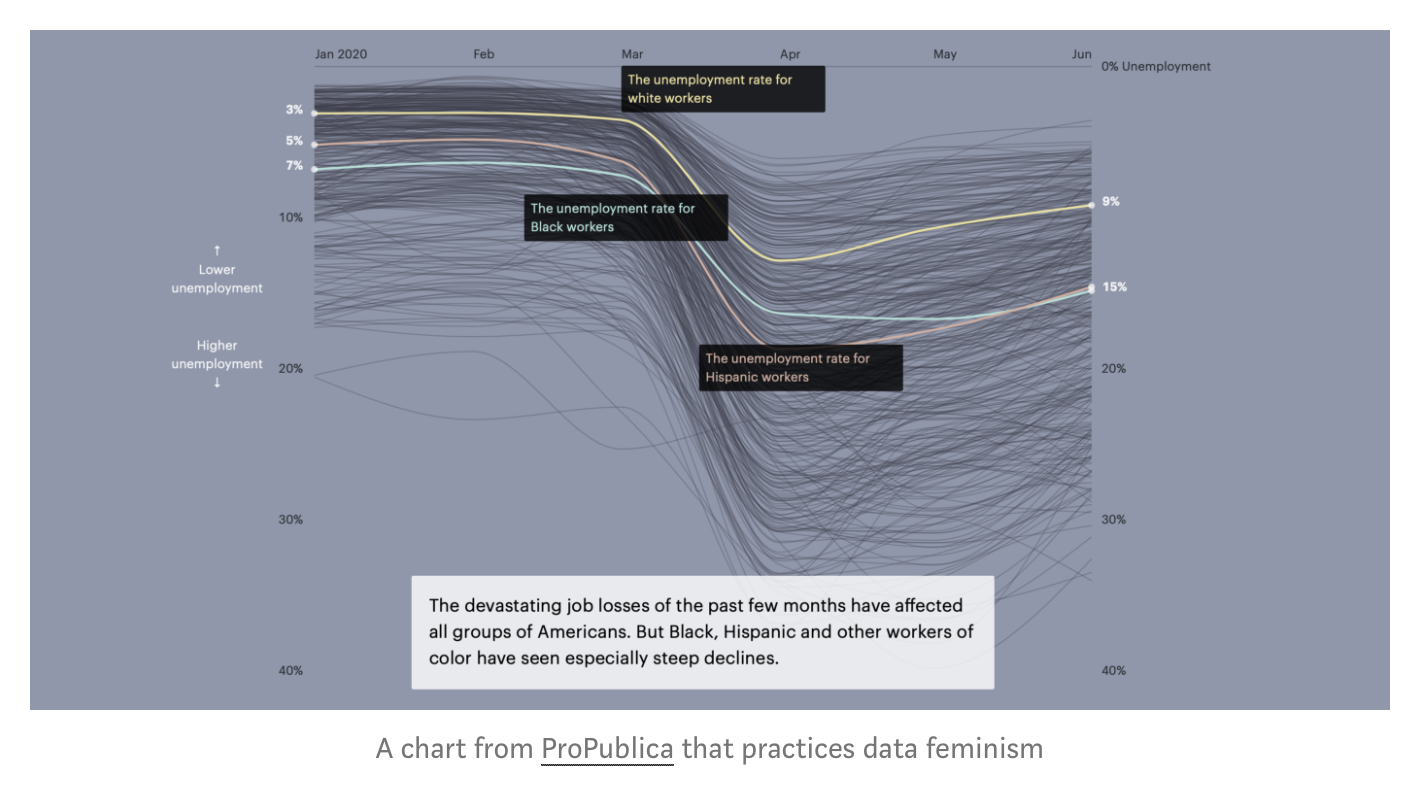 I noticed three main aspects of this graph that practice Data Feminism: (1) the inclusion of many lines to convey pluralism, (2) the use of inverted axes to leverage embodied, intuitive perception, and (3) an interactive component that captures intersectionality.

This design choice relates closely to one of the core principles from Data Feminism: embrace pluralism. Pluralism simply means that “when people make knowledge, they do so from a particular standpoint,” and that “all knowledge is partial.” Thus, the 11% overall unemployment rate, which has been emphasized in other stories, takes on a whole new meaning in this chart: 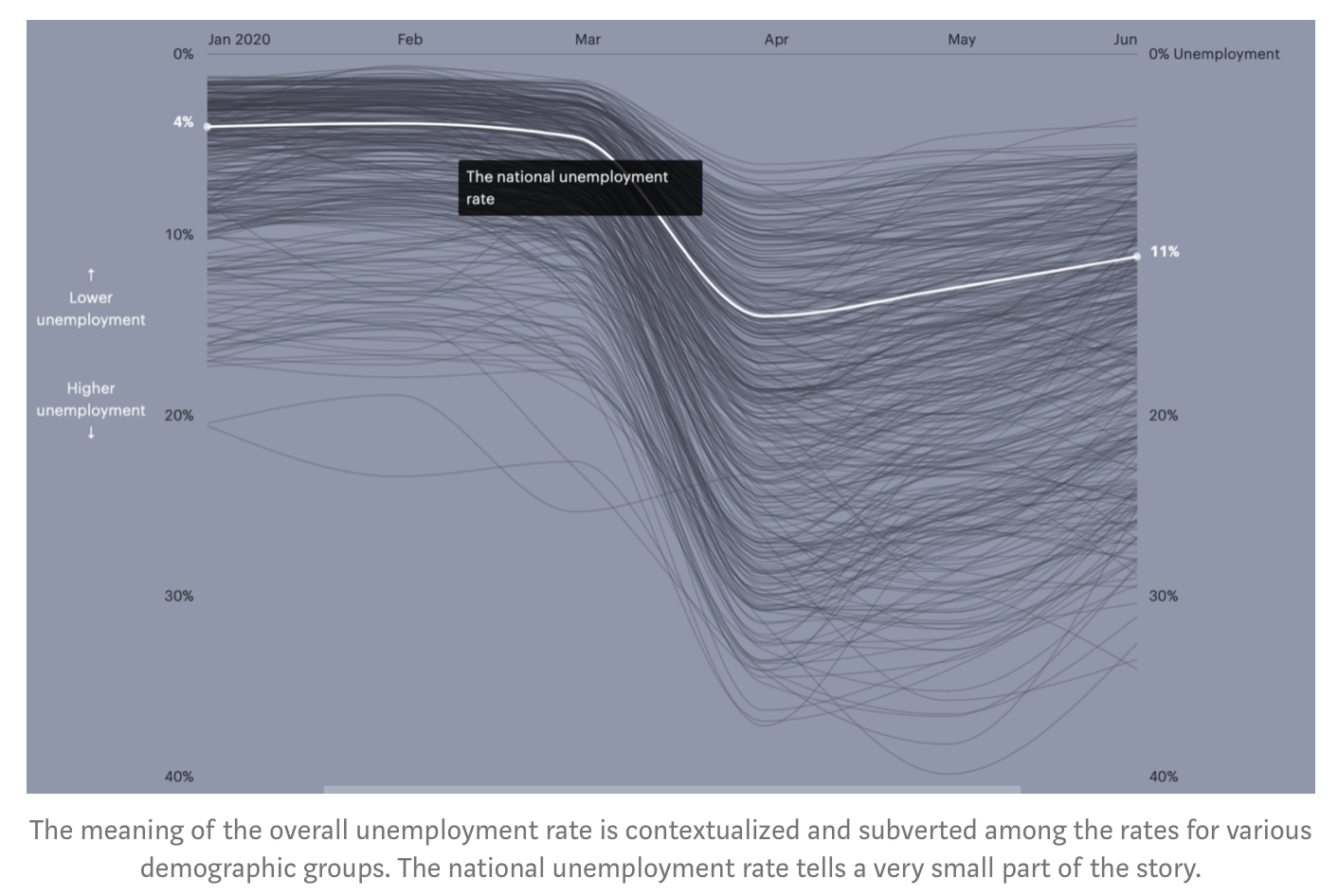 The chart situates the 11% as merely one number in a wide range of unemployment metrics. It does not ignore or exclude the overall rate, instead, it simply frames it within the bigger picture. Presenting each line as a different group of people helps contextualize — and to some extent subvert — the meaning of the overall unemployment rate. It shows that the 11% metric only represents partial knowledge.

I noticed the inverted y-axis as a subtle but important embodiment aspect of this chart. The author was inspired by a similar 2009 New York Times articleabout unemployment during the recession, which has been archived, but looked like this based on a screenshot from the Times: 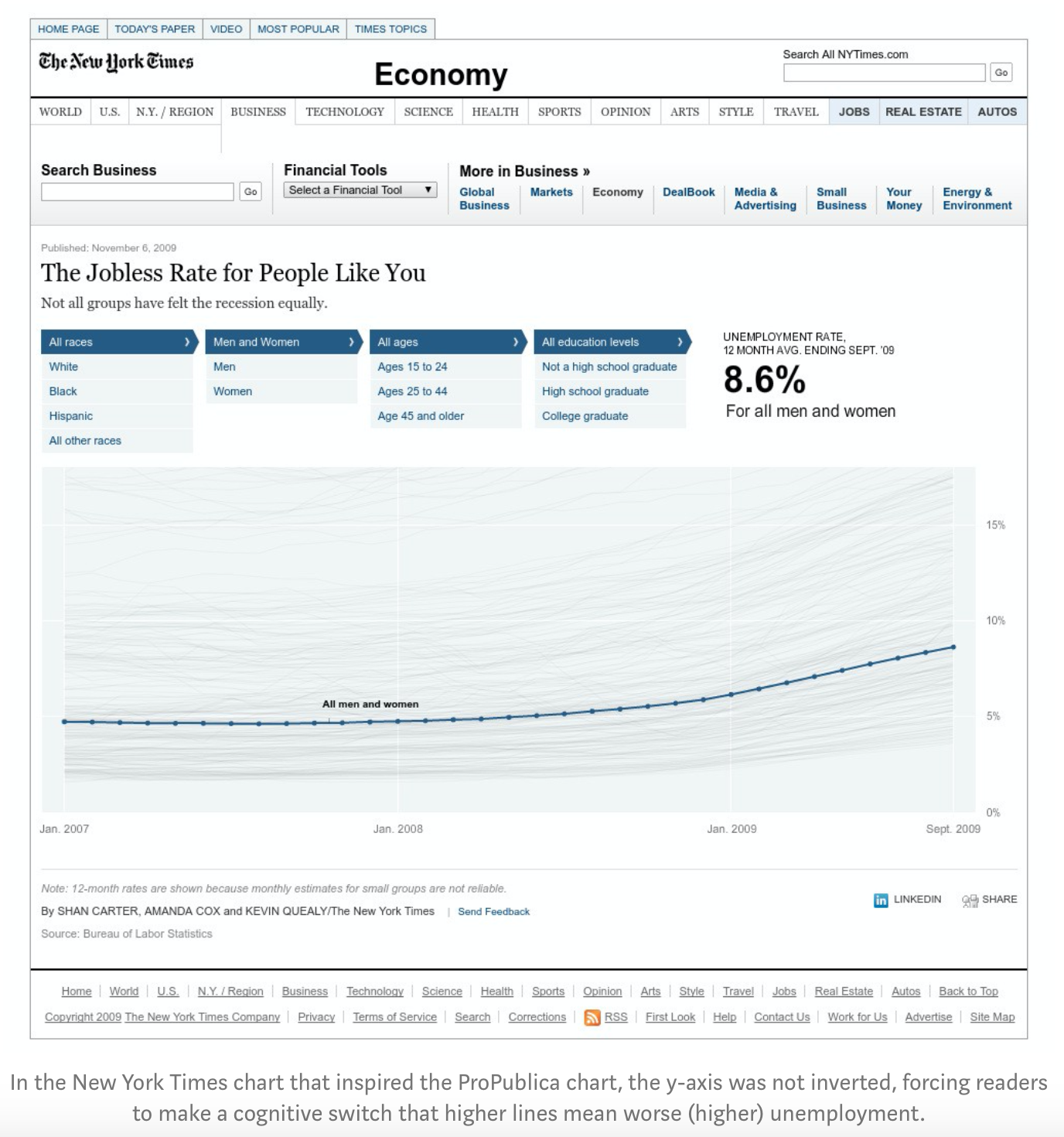 In the Times’ chart, high unemployment is higher, but in ProPublica’s chart, high unemployment is depicted as lower. This is a simple way of leveraging our embodied intuition that “up is good” and “down is bad,” which is helpful for the same reason that ceremonies at the Olympics feature the gold medal winner highest and bronze as the lowest. This “high ground” symbolism is almost universal, which is may be one reason why Bong Joon-Ho uses it as an important symbol in Parasite, associating wealth with literal physical elevation that protects from flooding and other hardships.

Flipping the y-axis places white workers “above” black and latinx workers, which is an accurate depiction of their higher prosperity. While some readers could make the cognitive switch on the Times’ chart (“white workers are lower, which means lower unemployment, which is better”), Groeger ensures that we intuitively feel which groups are privileged and which are oppressed. This utilization of intuition and embodiment also relates to the intersectional aspect of the chart.

One of the most important aspects of the chart is its depiction of intersectionality. If you look at this Wall Street Journal article about unemployment, you will find a failure to account for intersectionality: 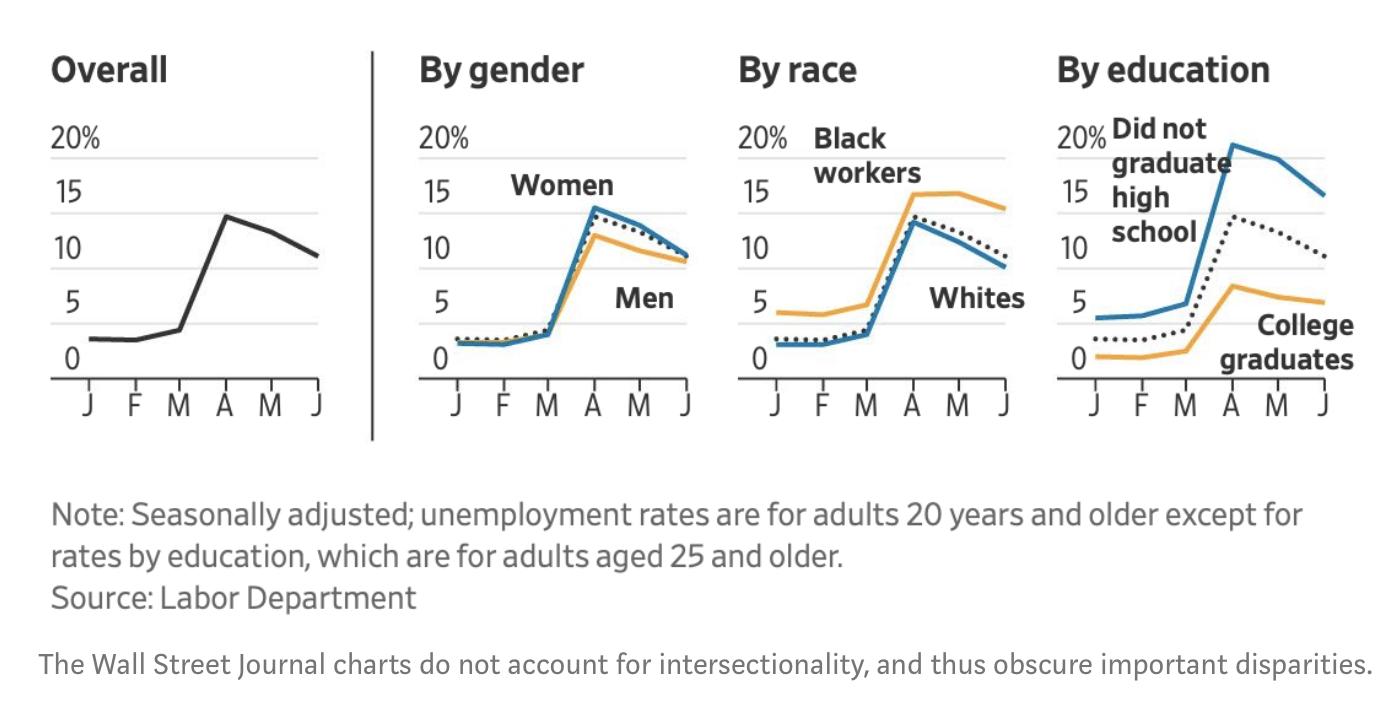 We can compare black workers versus white workers, or men versus women, but what about white men versus black women? This is what’s meant by intersectionality. The term has been somewhat popularized, but here is a helpful definition from the authors:

“The idea that we must take into account not only gender but also race, class, sexuality, and other aspects of identity in order to fully understand and resist how power operates to maintain an unjust status quo.”

While I was previously familiar with the concept, I learned from the book that it came from a court case called DeGraffenreid v. General Motors. In the case, a black woman sued GM for hiring discrimination, but the judge threw out the case because GM employed women and black people. But as critical race theorist Kimberlé Williams Crenshaw noticed and articulated, the employed women were all white, and the employed black people were all men. In other words, the discrimination was specifically toward DeGraffenreid’s compound (i.e. intersectional) identity of being a black woman.

ProPublica’s chart captures intersectionality very well, and the interactive component makes it even more clear. For example, I can see that the unemployment rate for white men with a college degree (a group I belong to) sits at the top of the chart, as one of the most privileged, least affected groups. This is the kind of important observation that is impossible with the charts in the WSJ article. 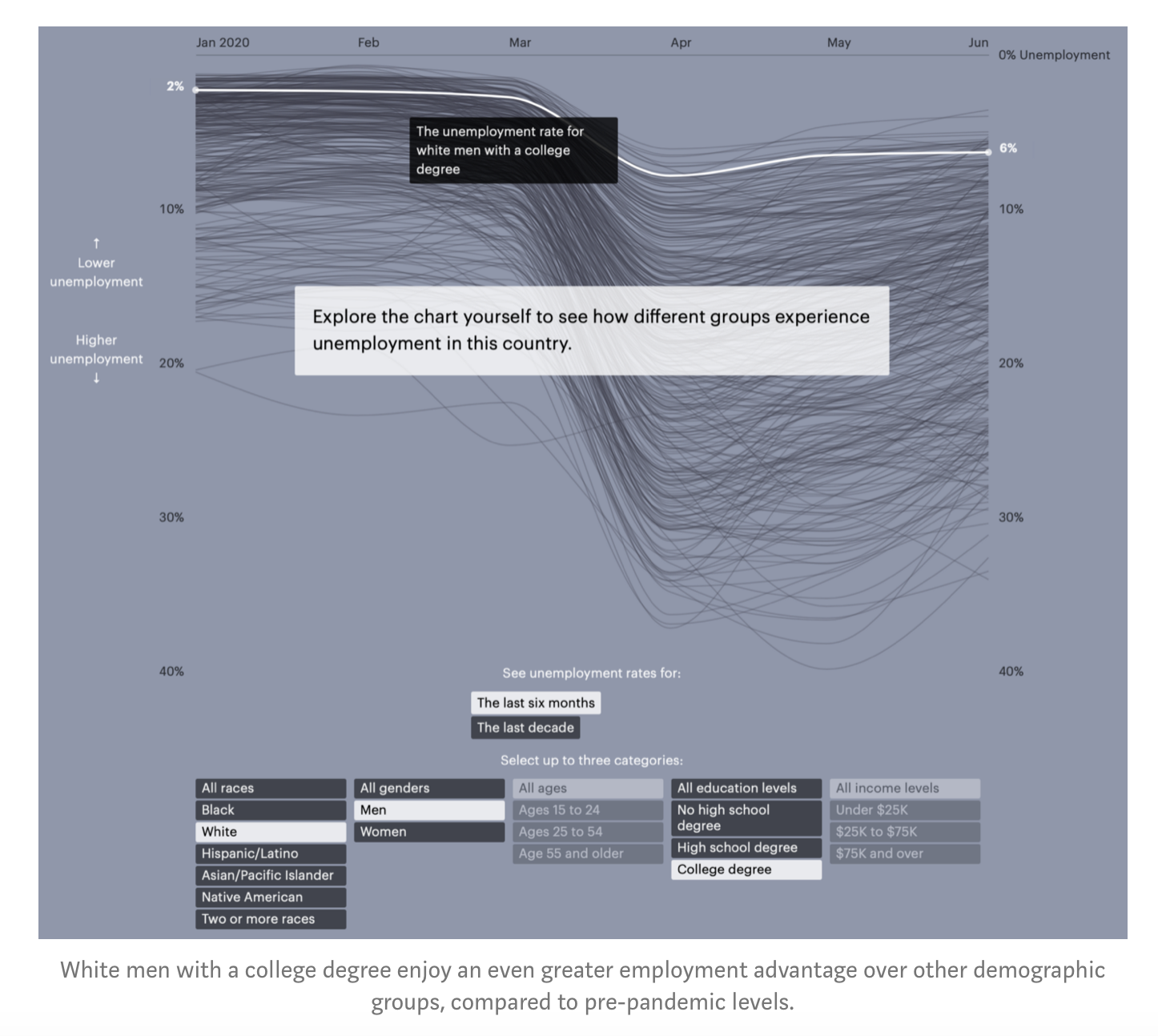 In summary, the ProPublica chart practices Data Feminism in at least three ways: (1) embracing pluralism through multiple lines, (2) leveraging embodied intuition through the inverted y-axis, and (3) highlighting intersectionality through the interactive components. Through these three aspects and more, the chart challenges the power knowledge narrative of a stabilizing economy, and instead tells a more true story of oppressed groups who are reeling from the economic effects of the pandemic.

If you are interested in data and justice, I highly recommend Data Feminism.

You can also read a draft of the book here, for free. This is the version I cited and quoted in this blog post.

Also, check out this Periscopic website about US gun deaths, which the authors point to as a quintessential example of a “data visceralization.”

This was originally posted by Jack Bandy on Medium.