Uber screws up and drivers suffer the consequences...again

From The Gig Economy Desk

Widespread shutdown orders have devastated rideshare drivers’ livelihoods during the pandemic. And a recent glitch means many UberEats drivers have lost out on tips that they rely on to survive.

The gig economy has not been kind to workers throughout the pandemic. Despite companies promising to pay workers, many workers have been left behind. And as rising unemployment pushes more people to join the gig economy, wages are being forced down even further.

Despite recently spending $2.65 billion to acquire Postmates, the way Uber treats its workers is akin to a factory owner from the 1800s. Why pay your workers minimum wage when you can thrust the burden onto customers?

The average UberEats driver earns around $8 – $12 per hour after accounting for vehicle expenses. Most of their income is through tips.

Jack, an UberEats driver from Central Florida, relies on the app as his sole source of income. But throughout the pandemic, making a living has become increasingly difficult.

“At first the lockdown caused business to explode,” he said. “But then as more and more recently unemployed people started signing up to drive, opportunities have gotten fewer and fewer.”

This week, many drivers have been faced with a glitch that has prevented customers from tipping. According to Reddit, it began on Monday.

For many people, including Jack, this glitch has been a huge deal.

“It was devastating, and I really mean that. Tips typically make up 60-70% of my income. Sometimes more. Without tips we don’t even make minimum wage. On Monday I did eight deliveries before I realized what was happening. If I had to estimate how much money I lost out on, I’d say minimum $60. For four hours of work, that’s a lot of money for me to miss out on,” he said.

It’s not the first time this has happened -- drivers and users have reported similar glitches multiple times over the years. Each time, Uber has brushed it aside. Even when drivers tried to report the glitch and get answers, Uber's communication was terrible.

“When I spoke to support on the phone, the agent confirmed to me that they knew about the glitch. Later in the evening it seems like they started denying their knowledge of the glitch to other drivers,” said Jack.

Another driver, who wishes to remain anonymous, has been communicating with Uber in an attempt to recover their lost income.

“I’m getting several bot messages from support that tell me how tipping is optional. Others saying it’s ‘being worked on’ and two others saying it’s been resolved and that I’ll receive my money ‘in a few hours’. Well that was yesterday and still no money from five orders," they said.

But this afternoon, they received this message: 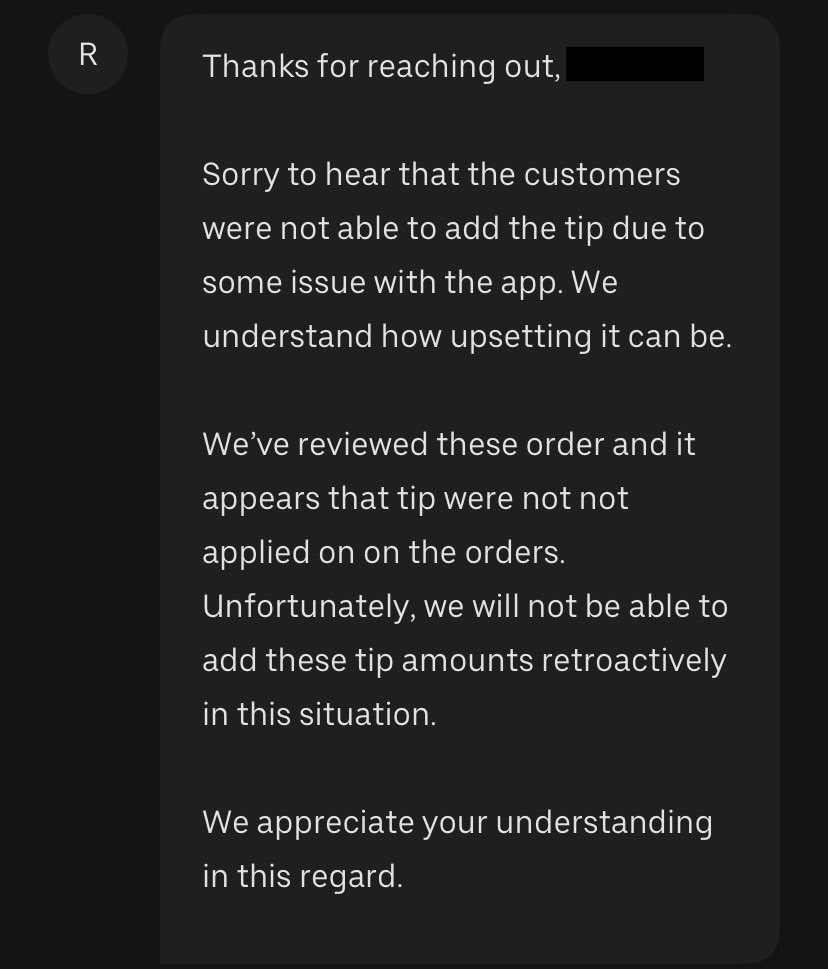 "I get no appreciation for over 5 years of service and 10,000 trips with regular customer rides and deliveries," said the driver, who relies on Uber to take care of their family of five. "I receive about a 60/40 paycheck... 60 percent tips 40 percent fares. Uber has drastically cut the way they pay me over the years and put the weight of my pay on the shoulders of the customers."

Getting tips is not guaranteed, but many drivers would not willingly accept orders if they knew that being tipped was not an option. It was on Uber to notify drivers of this glitch immediately -- and they chose not to.

If Uber really "understand how upsetting this can be," they'll stop making drivers pay for their recurrent screw-ups.