From The Startups Desk

Entrepreneurs, venture capitalists, business schools, and many university scientists and engineers have long believed that disruptions are common and that startups are the reason for these disruptions. But is this true?

Are disruptions by startups as common as some believe? Do they deserve the attention that they get from venture capitalists, entrepreneurs, companies, media, universities, business schools, consultants, and policy makers? Or do they not? And if they are not occurring as frequently as decades before, shouldn’t we be concerned?

For today, they focus on so-called Unicorns, startups that have valuations of $1 billion or more, and particularly on those that have done IPOs. They will present their average market capitalizations in 2019, profits/losses, and share price changes after IPOs. Although averages for these two groups are compared, the real goal is to assess the chances that one or more of the ex-Unicorns will achieve top 100 market capitalization for at least one year. To simplify, subsequent articles consider 45 startups that became Unicorns between 2014 and 2017, but the story begins with the most successful startups founded between 1975 and 2004.

Table 1 lists founding date and time to both profitability and top 100 market capitalization status for 24 startups that achieved the top 100 status as independent companies. Many of these startups have had enormous impacts on the global economy, in particular the so-called FAAMNG (Facebook, Apple, Amazon, Microsoft, Netflix, Google), which represent about 25% of the S&P’s total market capitalization in Spring 2020 and more than 80% of the 2020 increase in the S&P’s total value, in other words, the most important firms of recent years. We focus on these 24 startups because many argue that it is these types of startups, and not the overall return on all investments in startups, that motivate VC funding and are the causes of the creative destruction Joseph Schumpeter and others celebrate.

Table 1 shows that these soon-to-be giants reached profitability relatively quickly. Thirteen of 24 had profits by year five and another 9 had profits by year 10. Only two took longer than 10 years and these were biotechnology startups, an industry that takes longer for startups to become profitable than others because they must wait many years for drug approvals. In other words, other than two of four biotechnology startups, none of the startups took longer than 10 years to achieve annual profits. Amazon took the longest to become profitable, becoming profitable in year 10, while two investor favorites in recent years, Uber and Tesla, are unprofitable at years 10 and 17. Uber’s cumulative losses are six times and Tesla’s are two timesbigger than those of Amazon at its peak losses and the losses for the former two are still growing. 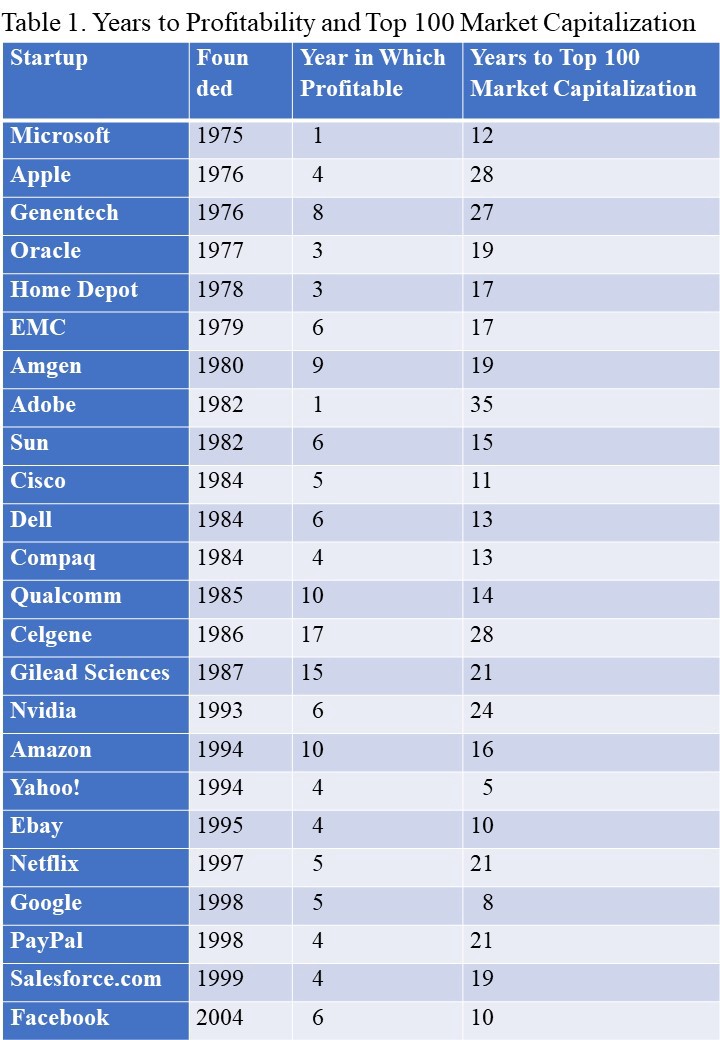 Table 1 also shows that much fewer startups were founded since 2000 than in previous decades. While six were founded in the 1970s, nine in the 1980s, and eight in the 1990s, only one, Facebook, was founded since the year 2000. One explanation is that there hasn’t been sufficient time for recent startups to achieve the necessary level of market capitalization, $98 billion in 2019. But given that nine of the 20 non-biotech startups in Table 1 achieved top 100 status by 15 years from their founding, there should be more than one founded since 2000.

One hypothesis is that new startups have been acquired before they had a chance to achieve top 100 market capitalization status by large incumbents, perhaps members of FAAMNG. For instance, Youtube was founded in 2004 and Instagram in 2010, and some claim they would be valued at more than $150 billion each if they were independent companies. Less valuable startups founded since 2000 and subsequently acquired by FAAMNG include GitHub, Linkedin and WhatsApp (most of which are social media).

One reason these startups are ignored is because all the startups listed in Table 1 have made acquisitions and many of them have made more than 50, some of which helped them generate increases in market capitalization. For instance, Cisco pioneered this strategy in the 1990s, helping it to briefly become the most valuable company in the world during the dotcom bubble. Similarly, Microsoft obtained Power Point, which later became an important part of its Windows suite of products, through the acquisition of Forethought in 1987, and Windows is a big reason why Microsoft was not disrupted by more recently founded startups.

A bigger problem with the acquisition argument is that it assumes new startups must challenge industries dominated by strong incumbents such as FAAMNG. However, most of the startups listed in Table 1 avoided strong incumbents by initially commercializing new technologies that did not fall within the interests of strong incumbents, a tendency supported by the rapid evolution in Silicon Valley’s technologies. Silicon Valley was given its name because of the large number of semiconductor companies founded during the 1950s to 1980s, but soon diversified into disk drives, networking equipment, personal computers, work stations, a wide variety of software products prior the change to Internet companies that occurred in the 1990s. Each of these technologies were commercialized by new startups partly because they involved significantly new concepts, customers, and applications, while recent acquisitions (Instagram, Whats App, Linkedin, and Youtube) mostly involve social media. Subsequent articles will pursue this argument, asking why breakthrough technologies are not being developed to the extent they were in the past.

Another hypothesis is that enough time has not passed for today’s Unicorns to achieve top 100 market capitalization status for at least one year. In fact, Tesla has been among the top 100 for the last two months, and thus may remain among the top 100 for the foreseeable future. But not only might Tesla’s success be due to the current stock market bubble, adding another startup to the row for 2000s in Table 1 does not change the results much and thus more analysis is needed. For this reason, subsequent articles analyze today’s Unicorns in much detail, presenting their profits/losses, market capitalizations, and share price changes to see if one of them might achieve top 100 status in the next 5 to 10 years.

This was originally posted by Jeffrey Lee Funk on Medium.