Gaming the Twitter system: lessons from the 2016 presidential election

A visual analysis of how electoral candidates and their supporters leveraged Twitter to help their campaigns during the 2016 election.

It’s 2020 and incumbent President Donald Trump is trailing in national polls. His political opponents are numerous and diverse, including disaffected Republicans represented by the Lincoln Project, Republican Voters Against Trump, and others in the “Never Trump” movement, as well as Democrats and progressives.

While the groups opposing the President might even outnumber his supporters, we question here whether they are too fractured as a social network to be an effective political force against him. Our study of Twitter network structures that focuses on the months leading up to the 2016 presidential election may provide some answers.

Initially, we were interested in how Russian trolls and bots might have manipulated Twitter during the 2016 campaign season. We produced visualizations of the social media network to measure the relative popularity of hashtags produced by the various actors in the network, including the candidates, celebrities, news media, and other social media influencers, as well as trolls and bots.

Our data was derived from an automated extraction process developed in Python 2.7, which allowed us to search for specified terms in the Twitter historical archive, including hashtags and words in tweets.  The program stores these so that we can visualize a tweet-retweet relationship data structure by creating an array of nodes and links based on the Twitter historical archive.

Nodes consist of users in the searched data and links are built between those users and others who retweeted them. 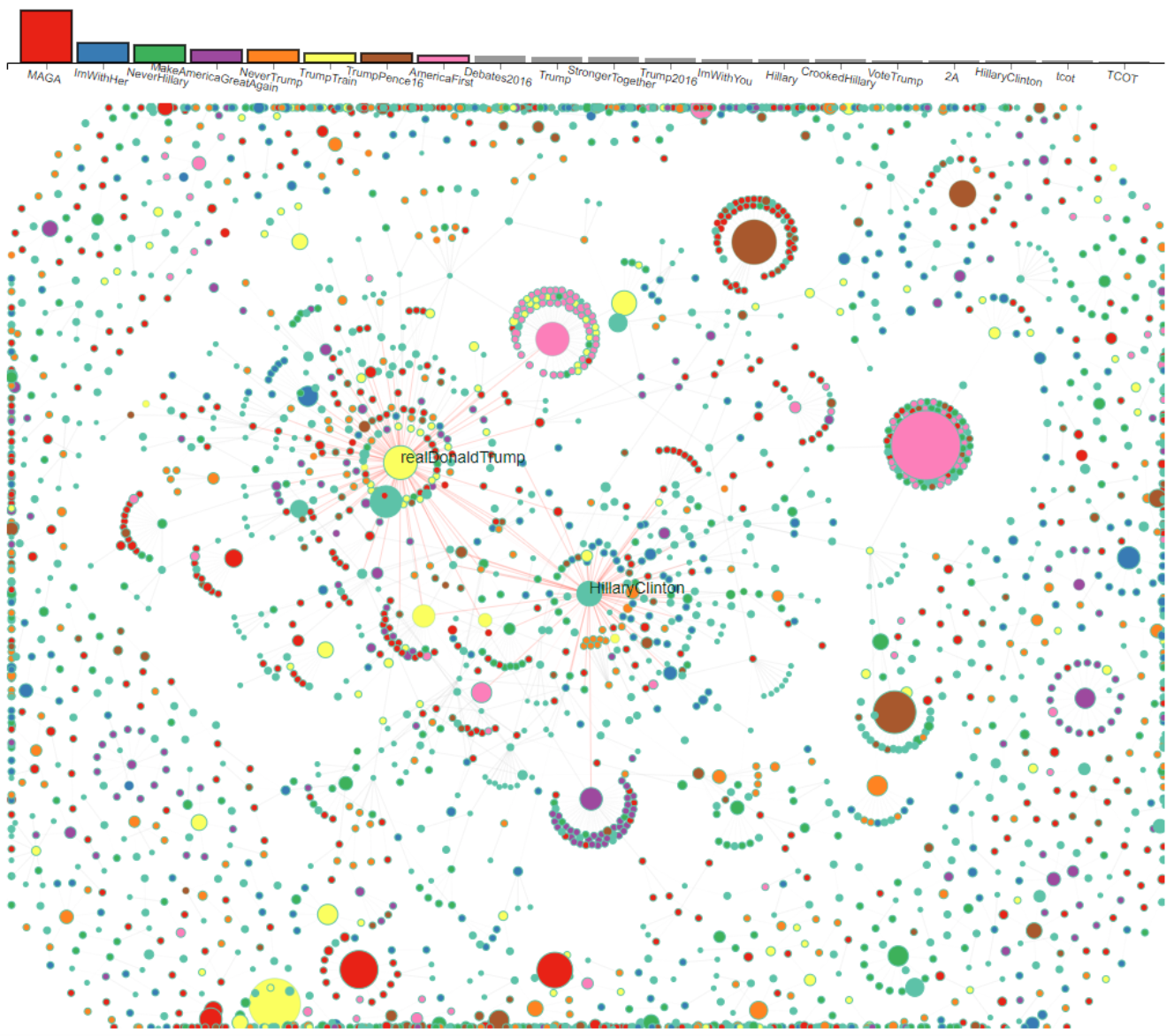 Our data visualizations in late September 2016 showed a “continent effect” in which there were large masses of pro-Trump hashtags that were getting more retweets and engagements within larger single groups. In comparison, pro-Clinton tweets were widely dispersed into much smaller islands.

Notice that the pro-Clinton tweets were actually greater in number than pro-Trump ones. This was somewhat analogous to the election results in which Clinton won the popular vote, but lost in the Electoral College due to how votes amassed in certain states.

The significance of this “continent effect” becomes more noticeable during the days leading up to the election. 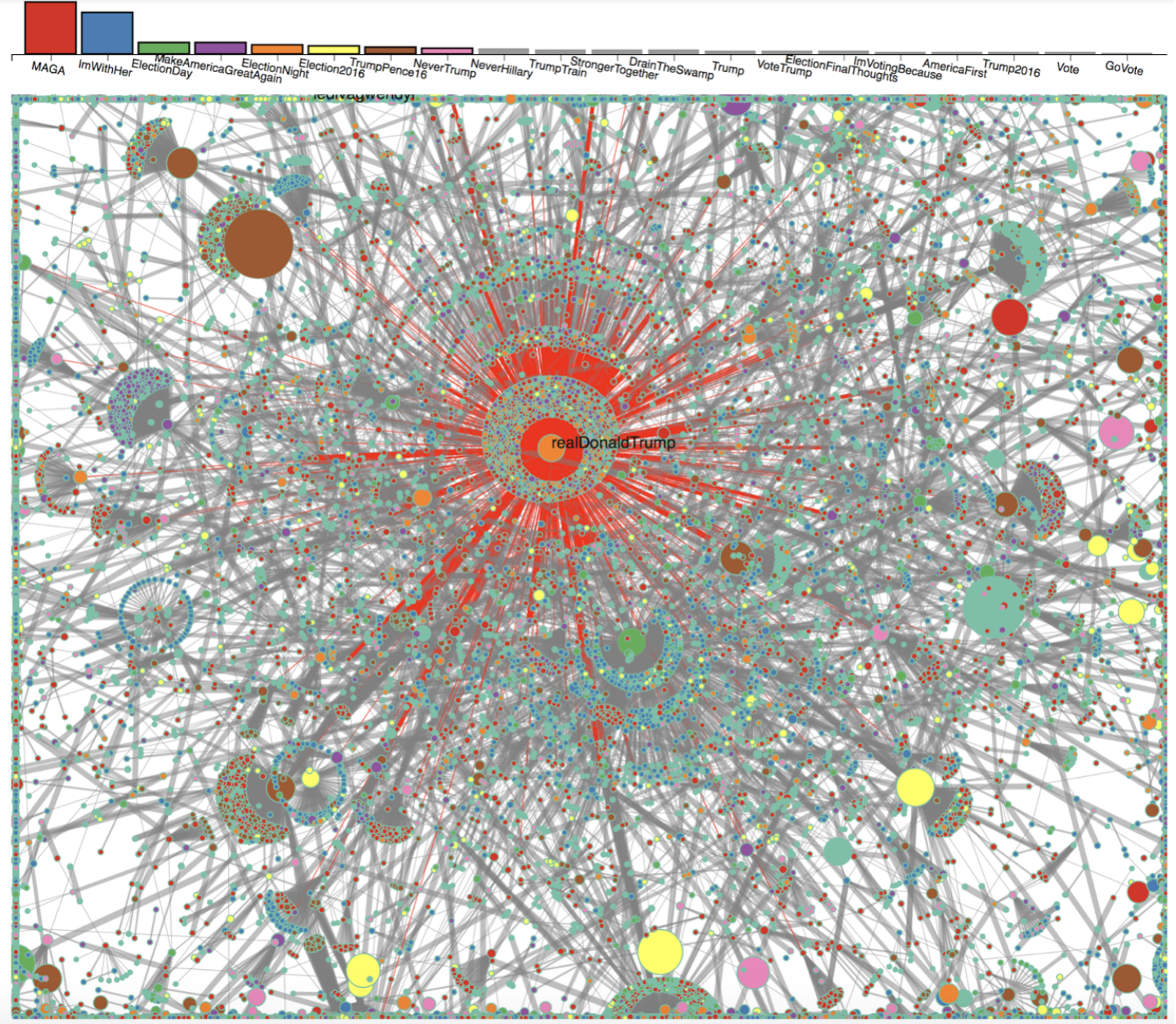 One of Clinton’s campaign slogans was “stronger together”. Ironically, this visualization shows that although the pro-Clinton tweets were ultimately greater in number, they were more widely dispersed than tweets associated with Trump.

To measure the relative influence of individual actors within the network, we did a series of “knock-out” experiments in which major nodes are removed from the data visualization to assess the impact its absence had on the greater network.  For instance, if knocking out a single Twitter account disrupts a large pro-Trump continent, you can deduce that the individual account was highly influential.

Interestingly, removing Trump’s and Clinton’s individual Twitter accounts (@realDonaldTrump and @HillaryClinton, respectively) did little to disrupt the network. Even without the centrality of @realDonaldTrump’s account pushing his signature hashtags, the network of pro-Trump hashtags remained visibly intact.

In other words, while Trump and Clinton did influence their own networks to an extent, neither was essential in their keeping their social networks together. 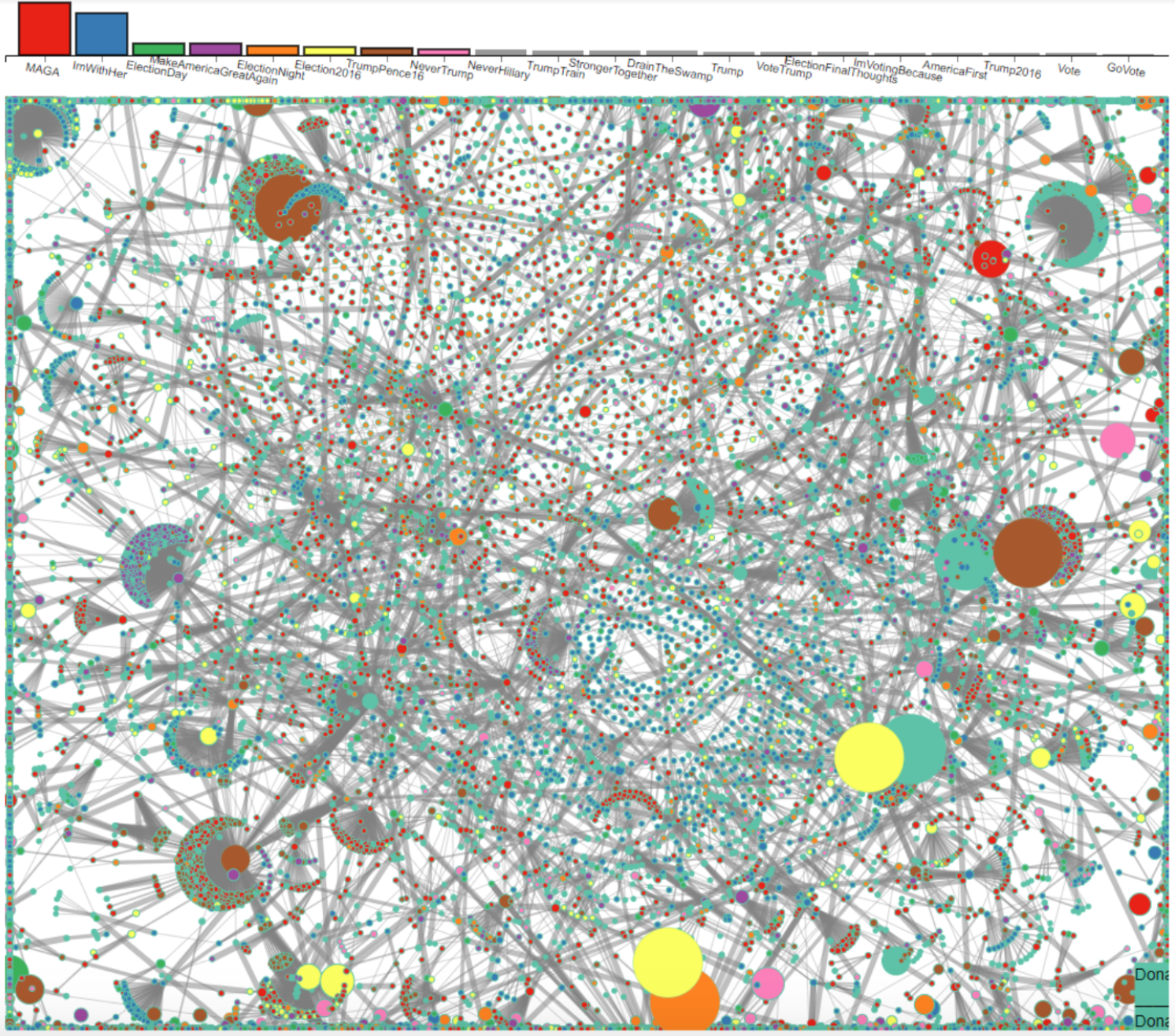 As shown below, these dominate the network and can be seen actively participating in connections not only between these major candidates and other supportive nodes, but also interacting with and connecting to one another helping to form a star-like shape within the broader network. 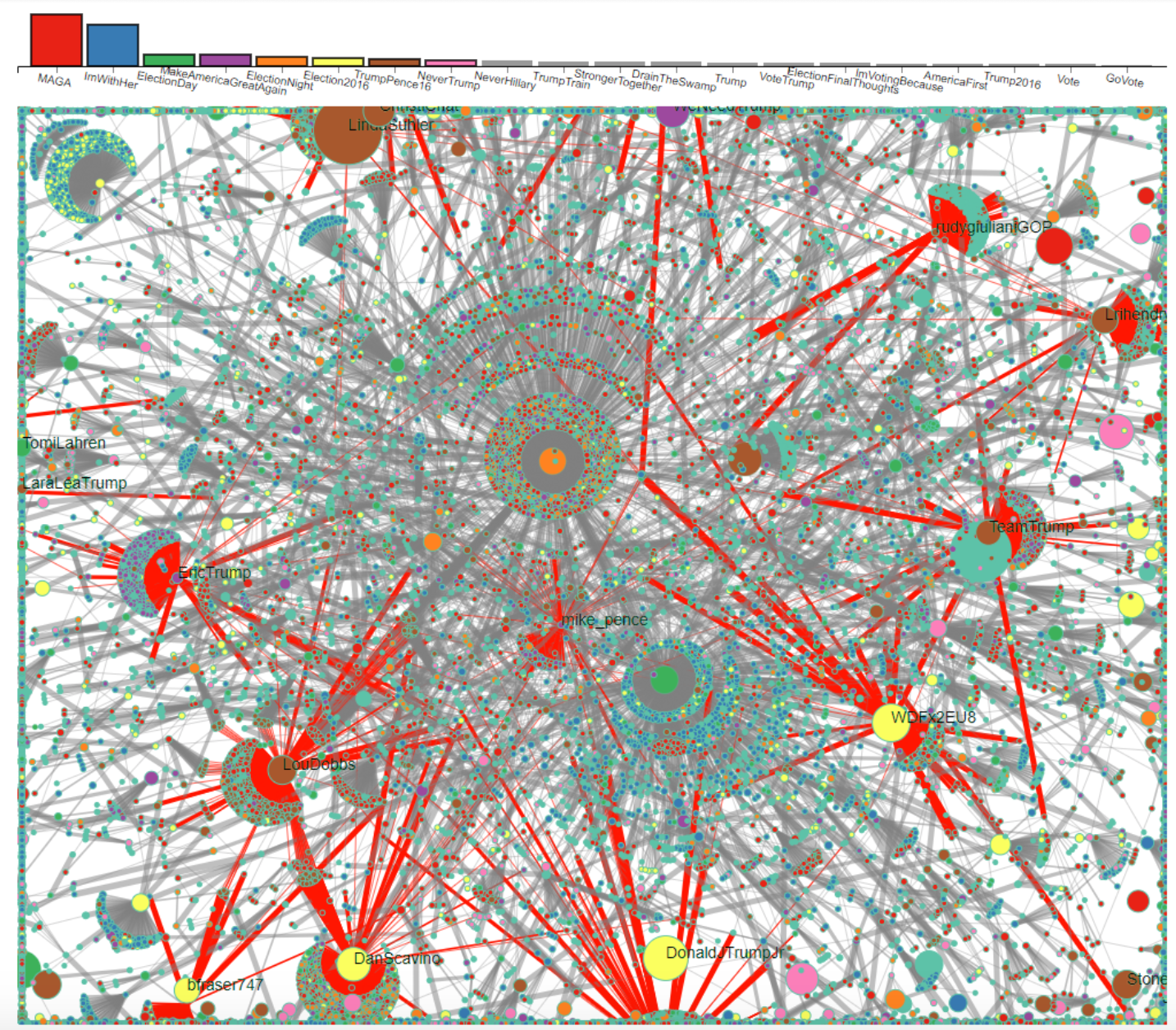 But our experiments also showed a more subtle and insidious form of influence.

More pro-Trump accounts on the political right (including those outside of Russian troll farms) did a much better job pairing hashtags in their tweets. They used more hashtags (e.g., #MAGA, #AmericaFirst) and more importantly, paired them with hashtags favored by the left (e.g., #ImWithHer).

We also discovered that pro-Trump accounts would pair their campaign hashtags with unrelated events, such as those related to the iPhone 7 release at the time. These strategies helped the political right to ensure a greater spread of their pro-Trump tweets. 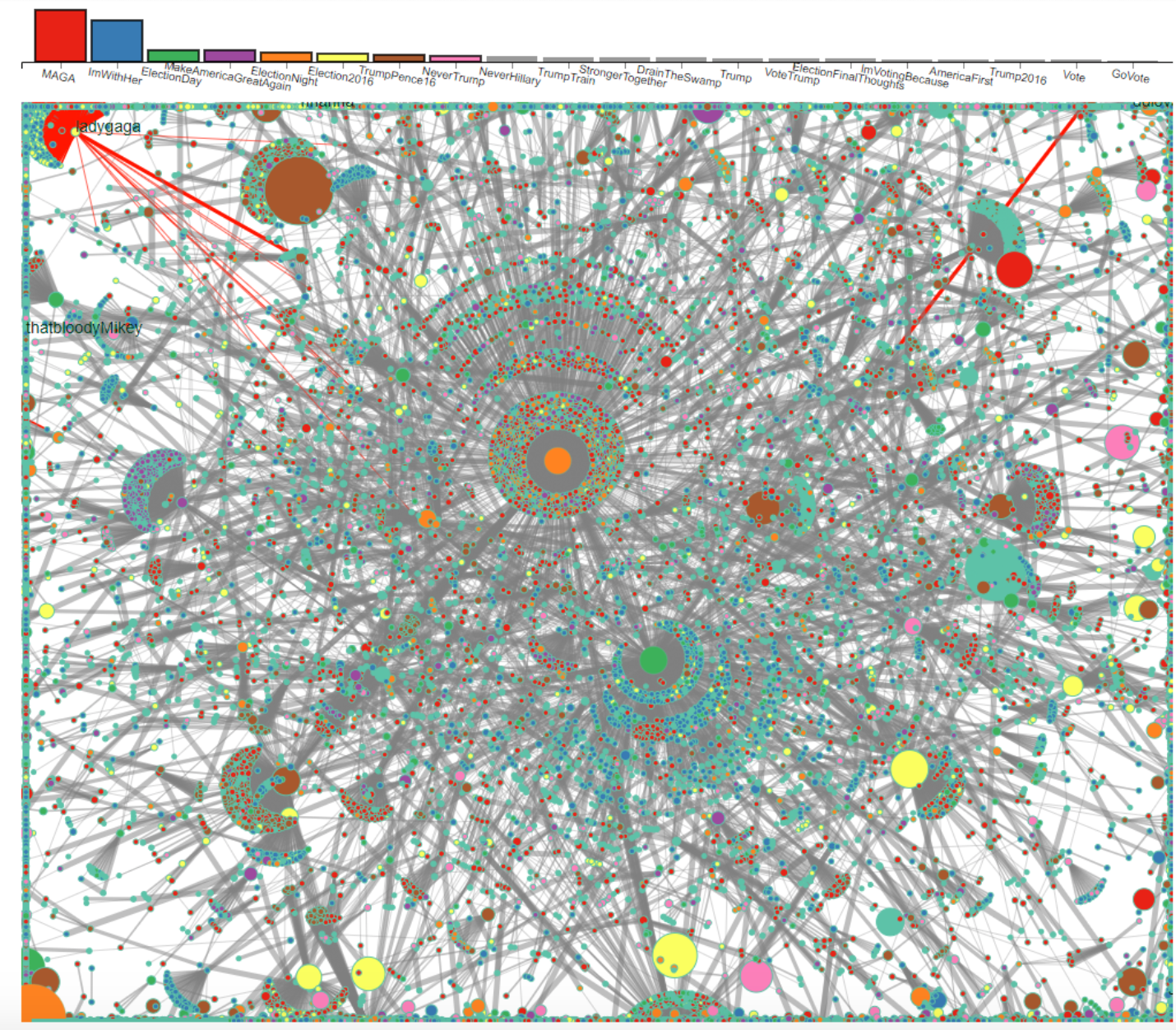 However, when looking at the top pro-Clinton Twitter accounts during the same time-period, which included @rihanna, @ladygaga, @NormaniKordei, @ChrisEvans, @ddlovato, @JLo, and @thatbloodyMikey, it is clear that many of these nodes outside of @ladygaga (in the upper left corner) and @ddlovato (the one highlighted edge from the upper righthand corner) do not have a strong connection to the network.

Many of these political left handles consisted of celebrities and are found along the periphery. In fact, outside of the two handles mentioned, many of these handles cannot be seen in the visualization. It also seems as if they are attached more strongly and centrally to @realDonaldTrump, rather than @HillaryClinton, even though they were more supportive of candidate Clinton and used hashtags supportive of her.

In comparison to the pro-Trump accounts which are at the center of the network, the pro-Clinton ones appear to be moved to the margins of the network. This shows that pro-Trump accounts have more engagements and interconnects among a larger group, while pro-Clinton accounts have fewer interconnections between one another in comparison. This shows that there is not only a disconnect from the main participants in the pro-Clinton network, but that there also appears to be little conversation occurring between these major nodes.

From the data presented here, it is evident that pro-Trump actors were more effective when it came to attracting attention within the network. At the same time, neither Russian bots nor major U.S. news outlets were prominent within the network. Instead, Trump’s base of supporters, including politicians, family, and far-right media personalities, was formidable in dominating activity on Twitter.

If our data visualizations from 2016 are emblematic of the current race between Biden and Trump, the groups within the political left and their Never Trump counterparts on the right should consider unifying their themes within similar hashtags.

While gaming the Twitter network with bots and pairing hashtags likely worked in Trump’s favor in 2016, the interconnection of varying (and real) people on social media may foretell the electoral fortunes of candidates in 2020.