After spending years violently fanning the flames, Facebook has announced that it will take aggressive measures to “restrict the circulation of content” on its platform if the U.S. presidential election descends into chaos, according to a report by the Financial Times.

The information comes from an interview with Nick Clegg, the ex-deputy UK prime minister whose promises aren’t worth the paper they are written on. Nick Clegg’s political legacy still lies in tatters after he hiked UK tuition fees in 2010 after previously pledging not to raise them and, and ultimately steered his party, the Liberal Democrats, to failure.

In an article published in the Evening Standard back in 2016, Clegg wrote:

“I’m not especially bedazzled by Facebook. While I have good friends who work at the company, I actually find the messianic Californian new-worldy-touchy-feely culture of Facebook a little grating. Nor am I sure that companies such as Facebook really pay all the tax they could — though that’s as much the fault of governments who still haven’t got their tax act together.”

In 2018, he took a job with Facebook as head of global affairs.

It’s unclear what “restricting the circulation of content” actually means, or what these proposed “aggressive measures” actually are -- but if it’s like any of Facebook’s previous “crackdowns”, it would be surprising if it had any effect.

According to the report, Facebook is working with military planners and exploring how to respond to around 70 scenarios. Clegg has also said that there are some “break-glass options” for extremely violent scenarios.

Facebook is the dominant digital platform for political ads. During the 2019/2020 news cycle, it captured a whopping 59.4% of the total share -- the equivalent of $796.8 million. It had over three times the share of the next big competitor, Google. 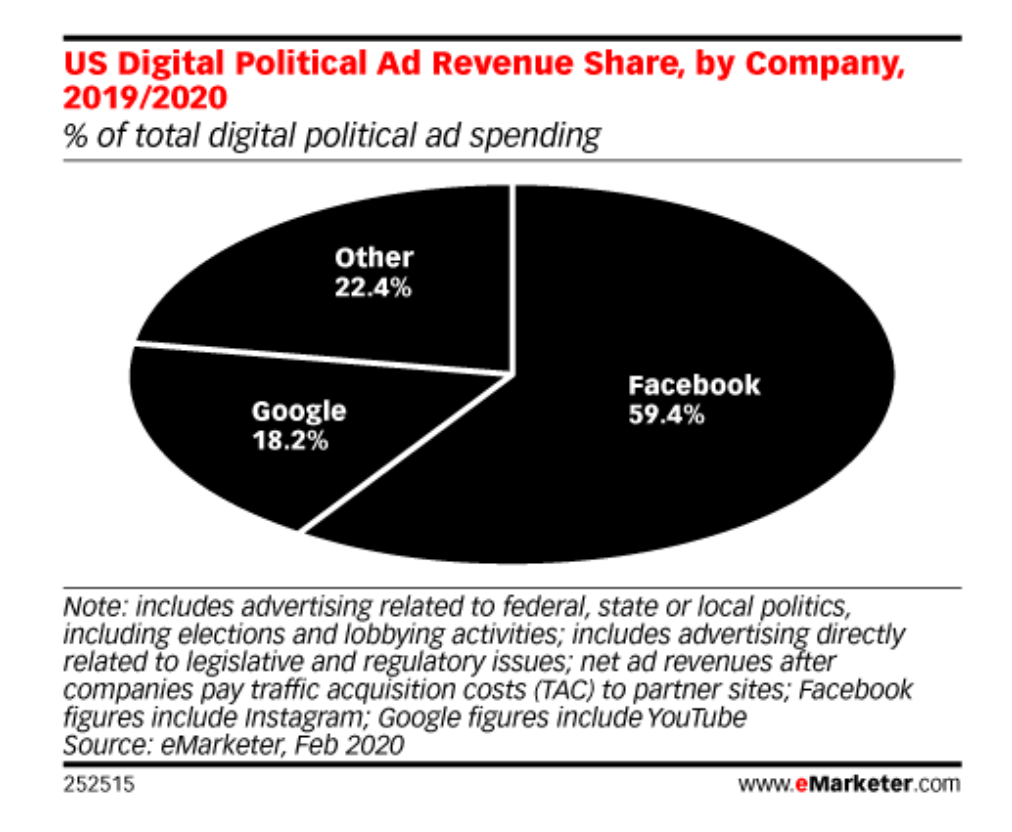 This year, that figure is expected to be significantly higher.

Over the past few months, Facebook has been under mounting pressure to tackle the spread of misinformation that runs rampant on the platform. It announced earlier this month that it would start adding informational labels on posts that could be considered fake news, and that it will also ban political ads in the week ahead of the election.

I’ve written previously about why Facebook ads aren’t the root of Facebook’s problem in comparison to the fake organic posts and underground conspiracy theory groups being amplified by an algorithm that spews fake news out into peoples’ newsfeeds -- and yet, despite Facebook’s “crackdowns”, this is still a huge problem.

Unfortunately, no matter how “aggressive” Facebook’s measures are, they will almost inevitably have come too late.