What could go wrong?

According to a new study from Pew Research Center, 26% of US adults say they get their news from watching YouTube. 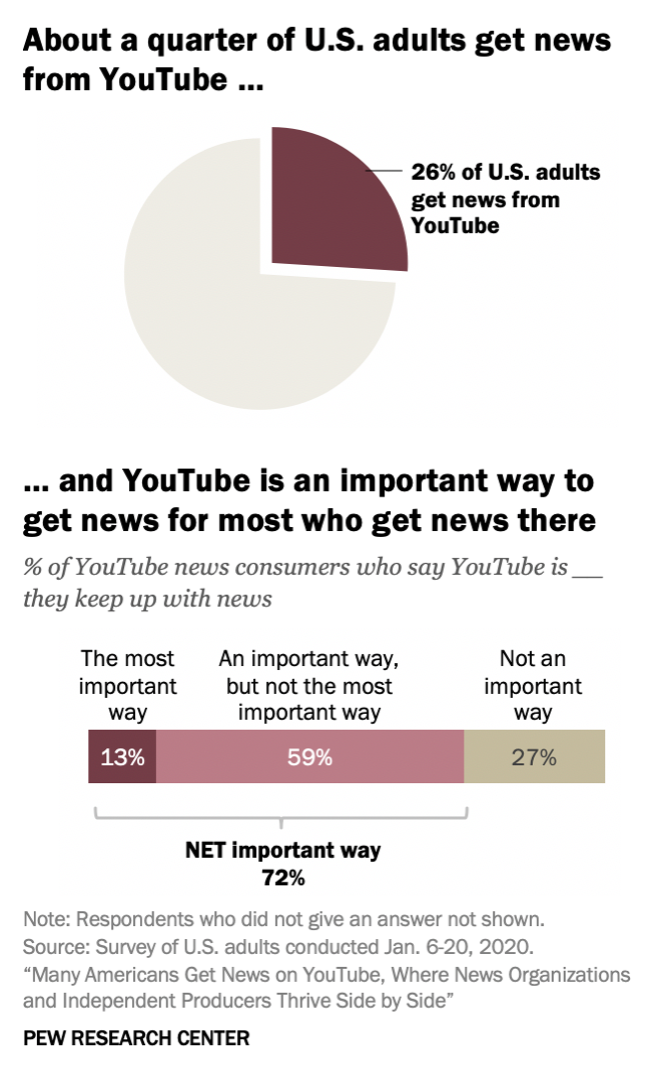 We don’t have to look far to understand why people are turning away from mainstream media. For years, newspapers have been declining. Online publications and television stations are littered with ads, and those that aren’t are often blocked by paywalls that make important research inaccessible for the average reader.

In comparison, YouTube makes it easier to search for news and watch it immediately. Furthermore, you can choose what to search for, so you can just watch content you want to see and block out everything else. It hasn’t introduced mandatory indoctrination ads -- yet.

This is a pretty big problem given that YouTube is the most popular website on the planet after Google (conveniently enough, they’re owned by the same company). At the beginning of September, Trump pulled most of his advertising from TV, with reports that Biden was outspending him 10-1. Bloomberg recently reported that Trump ads are set to take over the YouTube homepage on election day.

Last year, Google started limiting the ability for political advertisers to target audiences by removing the option to use political affiliation or voter records. This is a step forward -- but it hasn’t gone far enough.

Even more worrying than ads that have to adhere to a strict set of guidelines are the viral organic videos that are quietly radicalizing millions of viewers. In August, the Trump campaign posted almost 900 videos, while the Biden campaign posted just over 100.

The study by Pew Research showed that coverage of conspiracy theories was almost entirely concentrated in videos produced by independent channels. At the end of 2019, at the time of this study, most conspiracy theories related to QAnon/deep state, Jeffrey Epstein, and anti-vaccination.

Despite its flaws, one benefit of mainstream media is the ability to hire fact-checkers and editors, independent creators making a living sitting in their bedrooms and ranting into a camera have no such oversight.

After all, what could go wrong when over a quarter of the US population is getting their news from a website where they’re never more than a couple of clicks away from ConspiracyJim55 screaming and ranting into his camera about how Hillary Clinton is running an underground sex ring in the back of a pizza shop?