Media outlets are still struggling to understand what "viral" means

A video seen by less than 1,000 people doesn't make anyone a "rising TikTok star"

Every day, thousands of events happen. The job of a journalist is to decide what is – and what isn’t – worthy of bringing to a broader audience.

It’s an issue that social media has, in some ways, helped alleviate – the notion that journalists are gatekeepers, and therefore their prejudices and beliefs help shape the kind of thing that becomes news, regardless of how representative they are of society.

Margaret Hansard is a pensioner in Abbots Langley, a village of around 20,000 people in Hertfordshire in the United Kingdom. She has become newsworthy - though why is less certain.

Hansard took part in a video posted by her granddaughter to TikTok on September 24, where she danced while imploring people to follow the rules on social distancing to limit the spread of the coronavirus. The video is delightfully twee: she gyrates her hips with a grin on her face while pleading with us all to make sure we slow the risk of catching covid.

It’s the kind of thing that a journalist would pick as a good news story on a slow news day if it had significant evidence of some sort of head of steam online. But by the time the first journalist spotted it on October 10, Hansard’s TikTok had been seen just 700 times, which makes it one step up from a flop. In the survival of the fittest among the 1.6 million videos posted by UK users to TikTok every single day, Hansard’s video didn’t survive.

But journalists sometimes need stories to fill pages, and so a local journalist for the Watford Observer decided to write up Hansard’s video into a story. In journalistic parlance, the grandmother had become “a rising TikTok star”, and “started a movement”, even though fewer than 0.005% of TikTok’s 17 million UK users, and at most, 3.5% of Abbots Langley’s residents, could ever have seen it.

As for starting a movement, three videos on TikTok used the #nantervention hashtag that was meant to be the key crux of the movement. Overall, the videos barely scraped a total of 1,500 views.

Journalists overegg stories all the time. Minor bumps or setbacks can become catastrophes in the attempt to justify covering a particular story. Unfortunate incidents are transformed into tragedies in the flick of a pen. But when it’s combined with social media illiteracy – knowing that 700 views isn’t a big thing on a platform that’s used by 690 million people or more every single month – it can become dangerous. Particularly when fed into the news ecosystem.

The Watford Observer covered Hansard’s video on October 10. Nearly a week later the Press Association (PA), tweeted out a video (since removed) that called #nantervention “a craze” sweeping social media. 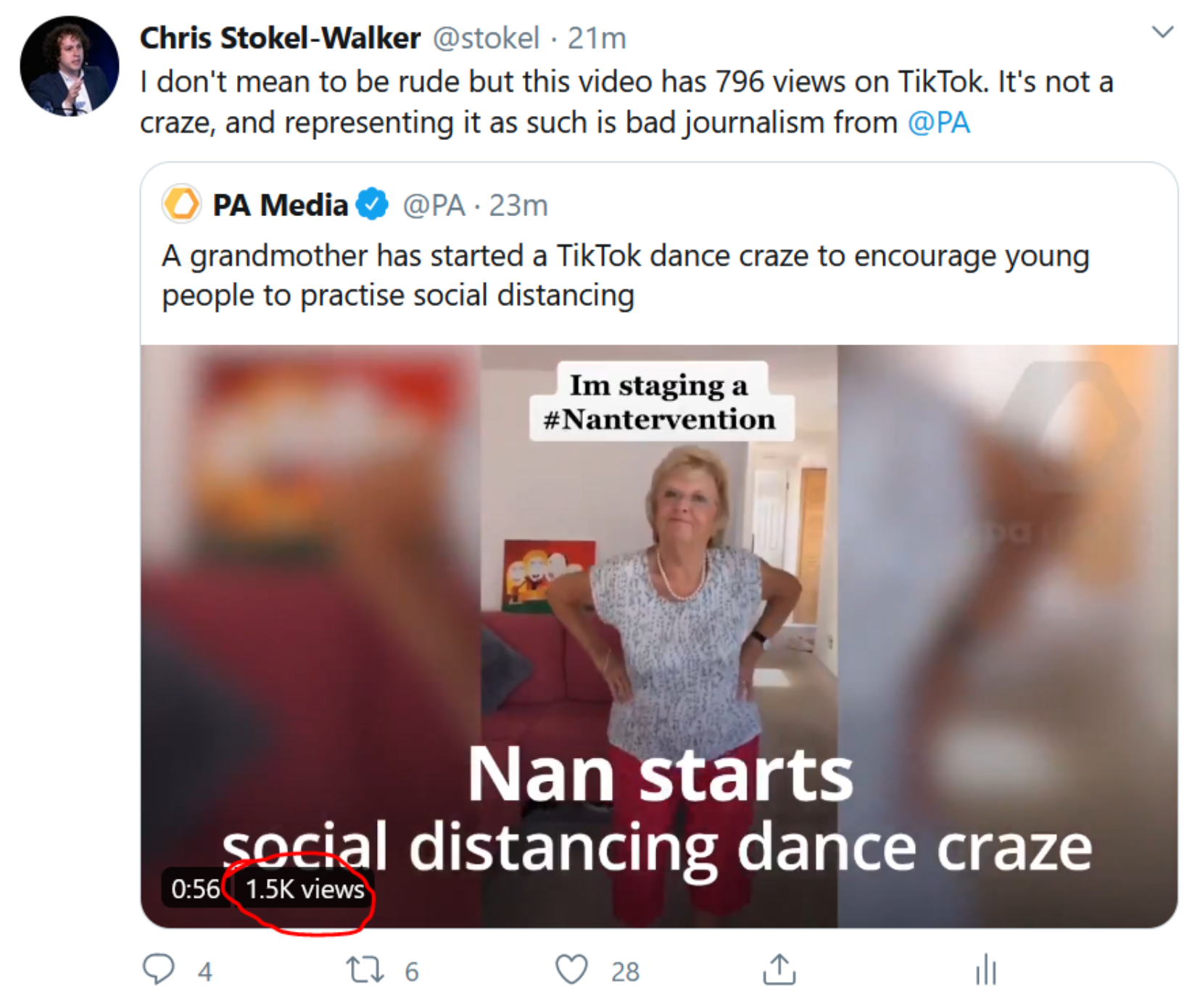 It was a week late to report a story that had only 796 views.

A Twitter thread I wrote highlighting the hypocrisy of calling something seen by fewer than 1,000 people a social media craze helped propel PA’s video into what I can only imagine would be superviral territory: it alone had more views than all the videos on TikTok tagged with #nantervention combined within 25 minutes of being shared.

The PA’s social media manager quickly cottoned on to the fact that the packaging of this grandmother as a viral video sensation wasn’t entirely accurate, and said the organisation was “fixing” the framing of the story.

The issue is that the PA is the UK’s main news agency. Every story and video it posts is sent to news organisations around the world, as “wire” stories. Given the imprimatur of legitimacy by the PA’s long and storied history, they’re seen as legitimate. It’s the UK equivalent of Reuters or Associated Press and its snaps on stories are read out authoritatively by news anchors on 24-hour rolling channels. This is how, five hours after the PA tweeted it was a viral video, the moderately amusing -- but not enormously successful -- grandmother ended up on the national evening news.

ITV News is the second-most watched news bulletin on any given day, the commercial equivalent to the BBC. Thankfully, ITV News didn’t repeat the viral claim, instead saying that the grandmother had only performed in the video, which was posted to TikTok. By then, the video had 822 views in total. The benchmark for success to become newsworthy, broadcast to millions of people, is apparently that low.

This isn’t a new problem. Digital or internet culture journalists are a relatively new phenomenon, and even though social platforms are increasingly our public squares, they are still treated with scepticism by their older peers. The likes of Taylor Lorenz, the New York Times’s internet culture reporter, are often mocked for writing about ‘silly trends’ when what they’re doing is writing the first draft of history that few others have woken up to.

Anyone who had even the slightest semblance of social media literacy could tell this wasn’t a story. Old people post on TikTok all the time – I’ve profiled 87-year-old grandfathers with audiences of millions. Any TV show with hundreds of views would be taken off air for disappointing viewing figures, so it’s hard to understand why it would be seen as a viral success on social media platforms with potential audiences many factors greater than TV channels.

That’s before we even get to the idea of how videos are presented on TikTok. The complex algorithm behind the app presents videos out of sequence and shorn of chronological order. Do even the slightest research into Margaret Hansard’s TikTok video and you realise that far from being a new thing that happened on October 16, or even October 10 when the Watford Observer journalist first decided it worthy of writing about, the original video is three weeks old, posted on September 24.

Social media ignorance meant that this wasn’t a story at all, but even if it was, it’d be a very old one anyway.