Parler users are still trying to convince everyone they're leaving Twitter

No, this time they’re REALLY leaving.

Since the U.S. election, Parler downloads have skyrocketed as millions of users have signed up to escape a perceived “anti-conservative” bias among mainstream social media platforms.

When I wrote about the app in the most recent issue of the Pando newsletter on Friday, it had hit the top spot in both the Android and iOS app stores.

CNBC has named Parler one of the “four latest contenders to Facebook’s social media throne” -- alongside TikTok, Discord, and OnlyFans.

The platform is currently trying to poach big personalities from other social media platforms, and prominent figures including Sean Hannity, Senator Ted Cruz, and Eric Trump are encouraging followers to ditch their social media accounts and migrate to Parler.

Over the weekend, there has been an influx of angry Twitter users announcing to everyone that they will be deleting their accounts and migrating to Parler. Many of them are still talking about it. Because if you haven’t spent an entire week posting on Twitter about how you’re going to delete your account and move to Parler, then what’s the point?

So far, conspiracy groups that have been shunned by other platforms, including ProudBoys, QAnon, InfoWars, and VDARE have managed to amass large followings on Parler. Yesterday, Proud Boys posted what they claimed to be an image from their march.

In case the pink hats and lack of Trump flags don't give it away, a quick reverse image search reveals that the picture is actually from a Women's March that took place back in 2017: 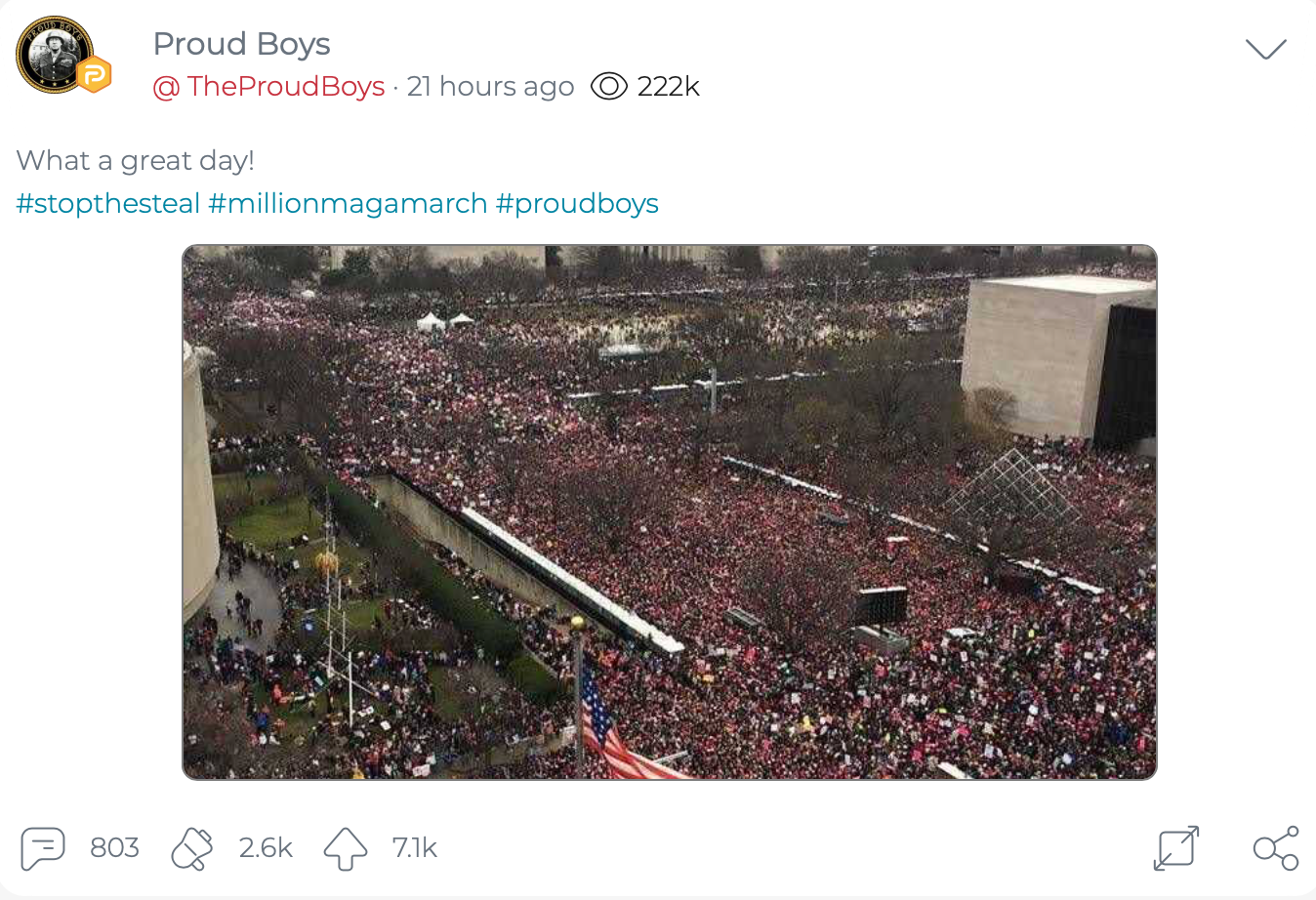 To verify your account and become a “Parler Citizen,” the platform requires users to verify themselves by sending a photograph of their passport and drivers’ license, plus a selfie. But in an interview with The Washington Examiner, Parler CEO John Matze claims that one thing that sets Parler apart is that it “does not sell or share any personal data at all”.

Rebekah Mercer, a prominent conservative donor, and daughter of Robert Mercer -- a co-founder of Cambridge Analytica -- recently announced that she is helping to fund Parler. Back in 2016, the two were among the most influential backers of President Trump.

“John and I started Parler to provide a neutral platform for free speech, as our founders intended, and also to create a social media environment that would protect data privacy. Benjamin Franklin warned us: "Whoever would overthrow the liberty of a nation must begin by subduing the freeness of speech." The ever increasing tyranny and hubris of our tech overlords demands that someone lead the fight against data mining, and for the protection of free speech online. That someone is Parler, a beacon to all who value their liberty, free speech, and personal privacy.”

“My father, Robert Mercer, has neither involvement with, nor ownership of, Parler.

But, my father and I are very familiar with the tenuous relationship among the facts, the truth, and the press.”

I wrote more about Parler in our weekly newsletter. Sign up and we'll send it to your inbox every Friday.