A strange 'pig couch' scam keeps popping up on Craigslist

A bizarre 'pig couch' scam has been circulating Craigslist for years -- and it's just resurfaced. Again.

“Got this pig shaped couch a few years ago. It was designed by artist Pavia Burroughs and is a really insane/cool addition to any home especially if you love pigs but even if you just like animals. Also very comfy!!!

Selling it for $250 even though my boyfriend and I bought it for over 11k and it’s in pristine condition. Need someone to pick it up ASAP as my new boyfriend hates it and sadly this is non-negotiable for him.”

But it turns out that there’s more to this pig couch than meets the eye. Abbey (who goes by the @birthday_dinner Twitter handle) first came across the couch two years ago. According to her, the post is a scam that has been cropping up on Craigslist for years -- and it looks like it could even be a completely different person posting it each time.

“I'd just moved into a new apartment in 2018 and was looking around Craigslist for free furniture. I saw the pig couch and thought it looked really cool so I messaged the number, but didn't get a reply,” she says.

“After that I felt a bit nervous about reaching out and decided to reverse-image search the picture from the listing, and found an interview with the original artist Pavia Burroughs on some random European blog about chair design.”

It turns out that the sculpture has a name. According to chairblog.eu, it’s called ‘Hillhock,’ and Burroughs designed it for her senior thesis show. An article on The Worley Gig states that the chair sold for $950.

“I looked up #pigcouch on Instagram and Twitter, and also Craigslist boards for other cities and I found all these postings for 'free unique couch' and 'pig couch' that were the same photo, with different excuses for why people were dumping them each time,” says Abbey.

“I confronted the guy from the NYC listing that I'd replied to and asked him why he was posting this and what he was collecting the responses for, since it was obviously a scam and he just deflected and told me I was one of the first thirty people to respond, so I should call this other number and that person would deliver the couch.” 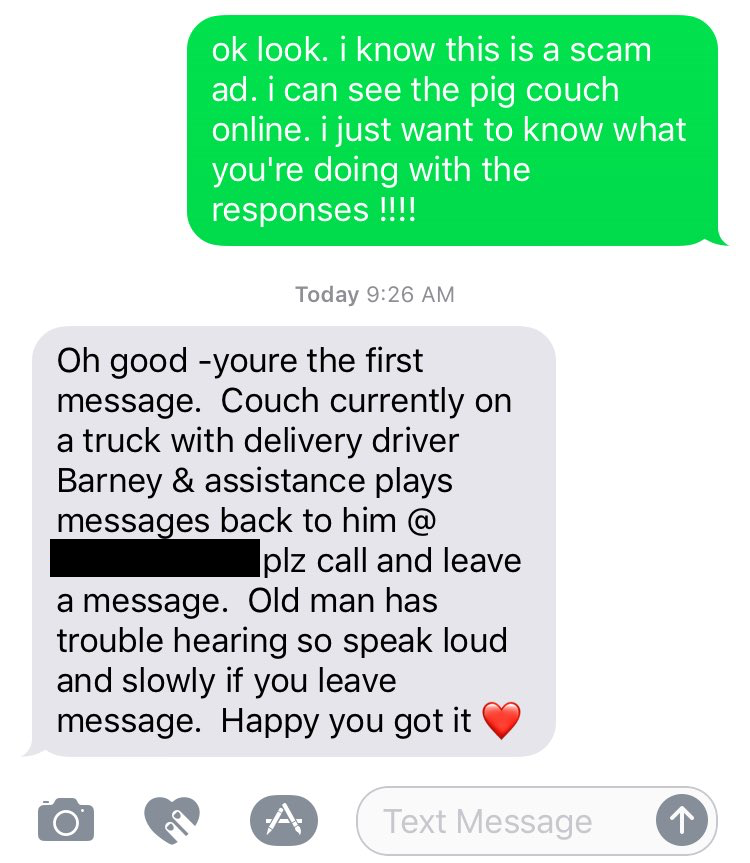 “I pressed him more and then he finally admitted there was no couch, and that the whole thing was because of this vegan he'd met on OK Cupid who wanted him to get spam calls from people. That also felt untrue, but he did send me all the other responses he'd received from other numbers about the pig couch, and all of those were very sincere.” 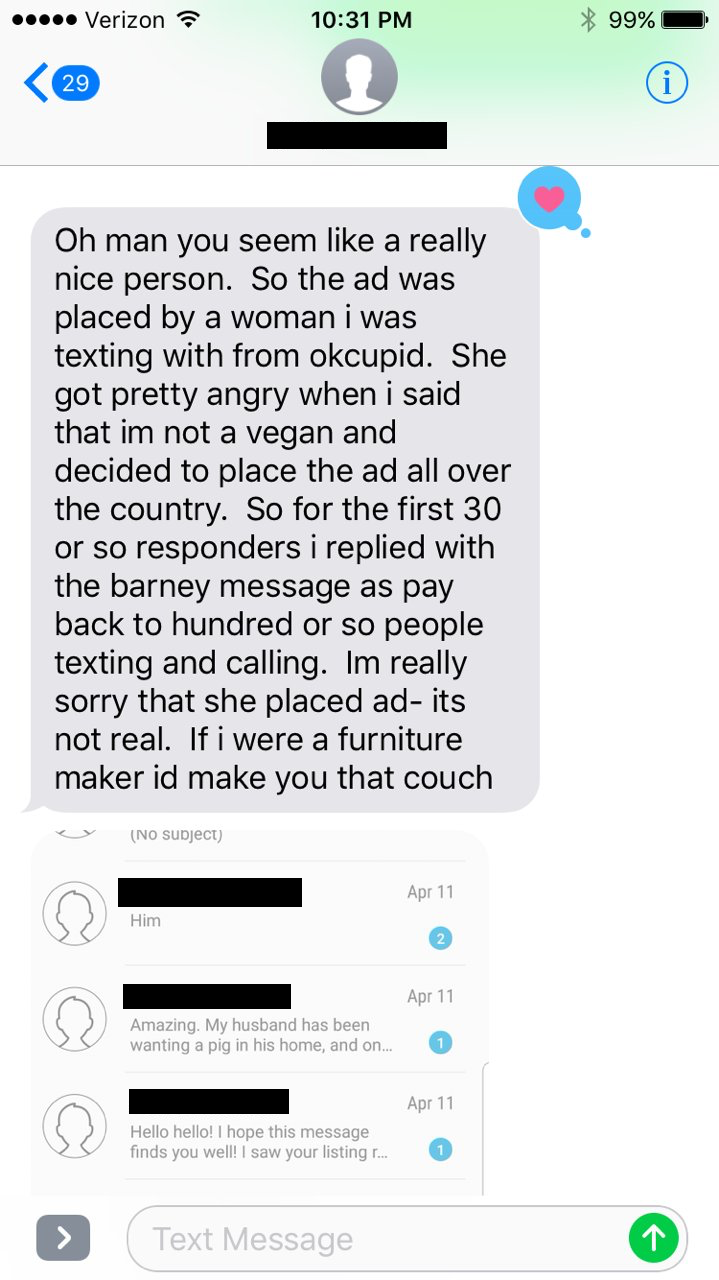 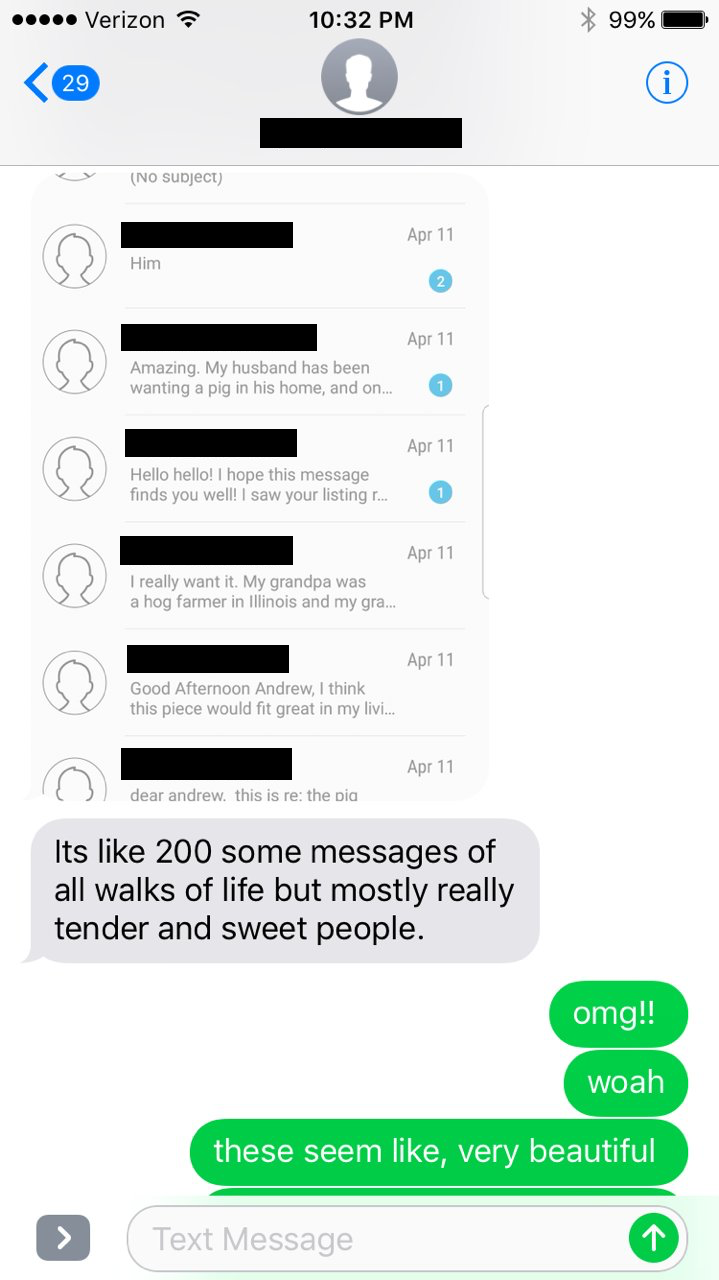 “So I assumed he was just trolling or having some fun at people's expense and resigned myself to just posting about the fake pig couch on Twitter, since I thought it was funny and I was surprised no one else had noticed it before. Eventually I texted him again asking what happened with the pig couch, and he sent some bizarre reply about how "women are pigs" or something, which was very jarring," said Abbey.

"I don't know that the new pig couch post is from the same guy, and this one's asking for money so it's a bit different. But people just seem to love advertising the pig couch on Craigslist. I'm sure it will happen again!”

I reached out to the original pig couch artist, Pavia Burroughs, to get her thoughts about the ordeal. Here's what she had to say:

"Yes, the pig couch It goes viral about once a year, and it is usually due to a fake Craigslist posting.
I made it in 2011 as part of my senior thesis installation, Everywhere Under Your Feet, which was about folklore in the everyday, and heavily influenced by Kip Williams Masquerade.
I sold the couch to a man in Maryland in 2011/2012, I thought I sold it for $500, though someone sent me today a blog saying it sold for $950 -- I feel like that was my asking, but not what I got. The buyer told me that pigs were tied somehow to the branding of his company, and that he was going to use it as office furniture. I have not seen the couch since, except when it pops up on Craigslist in fake ads; everyone always uses the photo I took in 2011 in my student studio, so for all I know it's still in Maryland.
My feelings for it are very mixed. It's a real love hate. I foremost think it's hysterical that it's a repeated Craigslist hoax. What frustrates me the most is when people think it's a piece of art about obesity, as they are seeing it out of context. People love it, people hate it, it's objectively horrifying, and weird, and adorable, and sad. It's ironic that it's famous for being "sold on Craigslist", because it was very difficult to sell, it took me a whole year to get that $500 for it - but it's part of the joke, it's unbelievable that anyone would ever buy it."

Burroughs also has her own Etsy store, As Cold As Earth. Check it out here!

The pig couch owner has been identified. It turns out it belongs to Snort. Here's a picture of Snort employee Joel Esler sitting on it: 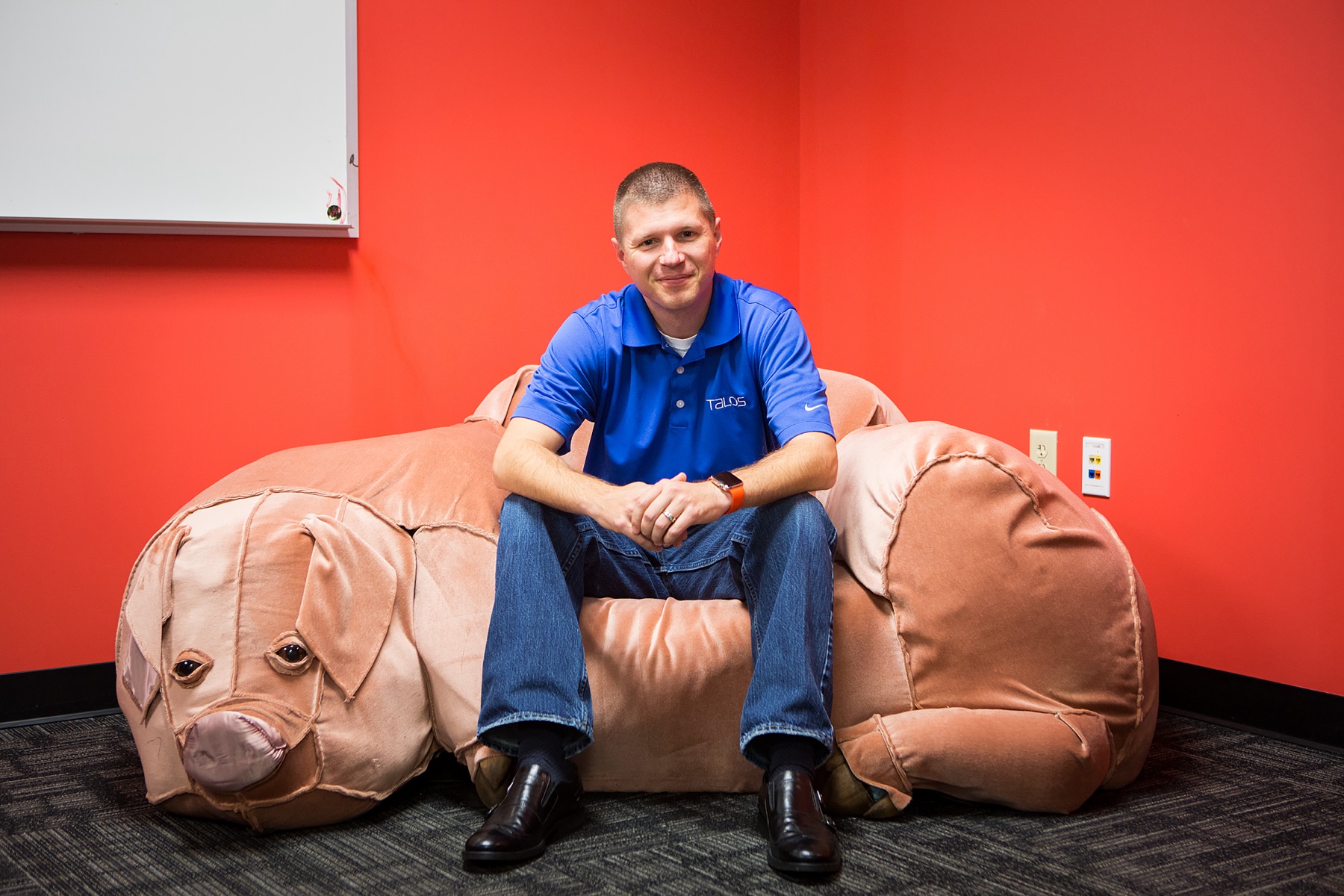 For more from Pando, sign up for our weekly newsletter. We'll send it to your inbox every Friday.