Gen Z’ers -- a group generally considered to have been born between 1997 and 2012 -- are known as ‘digital natives’, who have little or no memory of what the world was like before smartphones. They have been raised on the internet and social media, and with over 67.17 million Gen Z’ers in the US, they are anticipated to soon become the largest US consumer population.

The number of smartphone dating app users is rising too, and it is projected that there will be 25.7 million dating app users in the US by 2023 -- and yet, they still aren’t designed for Gen Z. A recent VICE article about ‘rules of dating, according to Gen Z’ went as far as to describe dating apps as ‘soul-crushing’.

Monet co-founder and CEO Daniel Huang noticed this while swiping through some of the most popular dating apps on the market. They all resembled that familiar (and objectifying) ‘hot or not’ model, and none of them helped him make the kinds of connections he was looking for.

“I think that for older people, this online dating thing was the novel part,” says Monet co-founder and COO, Joanna Shan, when I ask her why current dating apps suck so much. “But for people who grew up digitally native, that's worn off. We meet people online all the time.

“There's a hookup culture on Tinder, so you feel it's a little risque. On a platform like Coffee Meets Bagel, nobody's on there who's under the age of 20-something because that's too serious. It's for serious relationships. And so there isn't an app that's built for how members of Gen Z use a dating app, which is more social. It's like: I'm just looking for friends or I'm looking to have a good time. For example, my friend’s living in Wyoming right now, and he was using Tinder just to find friends to ski with. So it's just this idea that they can be a really good forum.

“We were thinking about how members of Gen Z are actually using dating apps more like they use social apps, just to meet new people and just to have fun. We tried to think of something that could be this fun and casual environment, and then at the same time help start the conversation better. A lot of people like to bond over humor and show their personality. So that's kind of where we went in.”

As it stands, the most popular creative apps, such as Snapchat and Instagram, are designed to let people interact with existing friends -- making new connections in an organic way is difficult. Monet fills this gap by giving users a platform to make new connections through -- if you haven’t guessed it already -- drawing. Even its landing page is interactive and fun -- you can draw all over it! 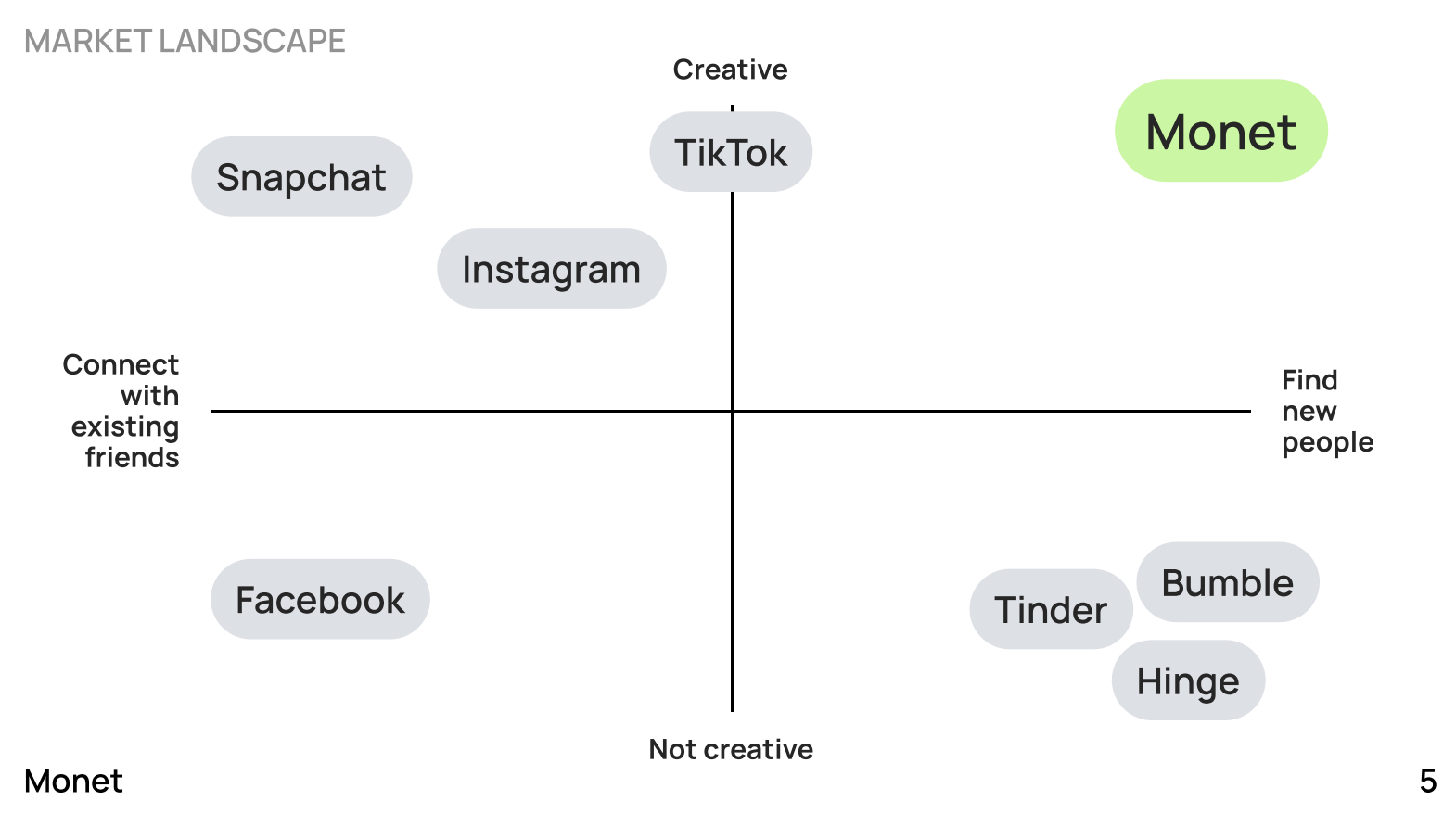 “What's the fastest, most frictionless way to make somebody laugh? I think it's with drawing,“ says Shan. “We were thinking about how young people are really into meme culture -- it's just a picture and a caption -- and how you can essentially generate a meme at the fastest rate possible. That's kind of what this drawing and titling allow you to do. What we've been noticing on Monet already is that if you have a more interesting profile, people want to draw for you.”

The team started working on Monet back in July. Within 3 weeks, the app had grown to over 8,000 users -- 28.8% of which are first-time dating-style app users. Today, over 2,100 people log in to Monet every day to send drawings to one another.

Monet’s user base differs drastically from the vast majority of dating apps currently on the market. 94.2% of its users are between 18 and 24 years old, with only 5.8% of users 25 or over.

“Obviously I think it's from where we marketed it,” says Shan. “I think TikTok has a really young audience. But it's super exciting for us because this is the audience that we wanted to build for.”

Most astoundingly of all, Monet’s gender ratio is totally flipped on its head when compared to mainstream dating apps. 79.25% of Monet’s users are female, 16.29% are male, and 4.46% are non-binary. For comparison, it’s estimated that 78.1% of Tinder users in the US are male, and 21.9% are female.

“For us, that's exciting. A lot of the time it's really objectifying to go on a dating app. There’s a lot of messages from creepy men for women, so that's a struggle that women often face,” says Shan. “Any corroboration that Monet feels safe and wholesome and fun enough that someone who's female would be inclined to use it when usually it's much more about men trying to get more matches, is great. We've also heard things explicitly say that Monet is safe and wholesome. So kind of having that environment is a big affirmation for us.”

And it’s clearly working -- so far, Monet’s growth has been entirely organic.

“There hasn't been any paid content or anything,” Shan says. “We started marketing through TikTok, but I think what actually got us more traction is that people who use Monet started to make their own TikTok content. We were really excited by that because I think the key to social is also how shareable it is."

TikTok is the fastest growing social media platform in the world. It has been downloaded over two billion times, and currently has over 800 million active users worldwide. 41% of its users are between the ages of 16 and 24, and over the past year, more and more big brands have been jumping on the bandwagon in an attempt to reach Gen Z consumers.

“The traction was really gained when people started to make their own TikToks and they actually became more viral than we did. So to have traction pickup like that really naturally, we were excited by that. And then eventually it made it to Twitter, to Instagram, to all sorts of different platforms.

“TikTok is kind of that place where it feels like everyone's collectively friends already, even though it's a stranger on your ‘For You’ page, you feel like, ‘oh, look, I want to support this. This is so cool.’ Like commenting for the algorithm or whatever. So it was really organic. I think it's an effective marketing strategy.”

Monet also has a Discord with over 1,200 people on it. When making design decisions, the team often presents the community with polls to see which option their users prefer.

“There's not a lot of things these people use that have been built by people their age. So it feels very far away. Snapchat's maybe not their platform because their feedback doesn’t necessarily get directly heard because it's getting so big. And I think that's why a lot of people feel personally invested in Monet and its growth.

“A lot of people talk about this idea of building in public. And so they started to attach that title to our origin story, which I think is true. I think we are building in public. But I think that from the outset, it wasn't necessarily a ploy. It was just kinda like ‘let's have some fun and tell the story.’”

Before Monet went viral, the team was working on it as a side-project alongside other commitments. Shan’s co-founder, Huang, was still in school.

“We were seeing this community of people who really cared about what we were building. That’s when we shifted to ‘oh, we could be doing this full time and this project could turn into something way bigger than we ever thought we could,’” says Shan.

“We raised a small round and there was a lot of pitching involved. A lot of discussions around, ‘where's Monet going to be in five years?’, which is just a dumb question, because how could you possibly know five years from now what it's going to look like? But I think that the discussions that we're having internally in terms of Monet in the future have been pretty interesting.

“We've been thinking a lot about why it resonates so much. For a lot of older people, when they hear about Monet, they’re like ‘why does anybody use that?’ It feels like it's coming out of left field. And for us, we've been thinking a lot about creative, digital expressions of yourself on the internet: having homepages, and wanting to customize what your profile and your presence is. That's one thing that young people resonate with.”

Throughout the creative process, the team had one key question in mind: what are the things about human nature that dating apps don't necessarily allow you to do?

“I think one of them is to show off a bit to impress other people,” says Shan. “I think that's something that people really like to do, and this gesture-based interaction allows you to actually put some effort into making a match. If you really, really liked them, you can convey that better rather than being on this equal platform of ‘I'm just another swipe in this sea of swipes.’”

Despite naming the app after a founder of French impressionist painter, the team isn't limiting Monet to drawing. Rather, they’re focusing on anything that allows users to make content quickly and easily.

“I'm thinking about maybe being able to give somebody who's seeing your profile some videos of you,” says Shan. “And then you're able to edit and splice those videos up, kind of like a mini TikTok, as a response, and that's the first interaction. Or maybe I'll give you some words, and you need to rearrange them into a poem. This idea is that people are naturally creative, but they just need to be prompted to be creative. They need to be given an incentive. Having this connection be your excuse to be creative, or having creativity be your excuse to connect -- whichever way it is -- I think it's exciting.”

For Shan, the process of creating Monet has been a really valuable journey in itself.

“Even if this tanks and goes to hell or whatever, l think we’ll come out of it at the minimum with a lot of new experiences to have learned from. So I'm really appreciative of it all.”