Companies that endorse global and human rights labor standards often behave in a way that violates those standards, but Amazon provides an extreme example of this hypocrisy.

From The Amazon Desk

In the past two decades, numerous Big Tech corporations, including Microsoft, Google, Apple, Cisco, and Facebook, have clamored to endorse global labor and human rights standards.

These standards include the UN Universal Declaration of Human Rights, the International Labor Organization’s “core conventions” (which include conventions 87 & 98 on freedom of association and right to engage in collective bargaining), and UN Guiding Principles on Business and Human Rights (“Ruggie Principles”).

Corporations have promoted their commitments to these global standards at every opportunity to assure their customers and investors that they are “socially responsible” in areas of environmental concerns, labor issues, and questions of corporate governance.

These global labor and human rights standards,  which supersede national and local laws, require that companies ensure workers have a free and fair choice on the right to form a union and bargain collectively.

Amazon, whose profits have increased by 70 percent over the past year, is no exception to this trend. Amazon claims to be “guided” by the Ruggie Principles and to “respect and support the Core Conventions of the International Labor Organization (ILO), the ILO Declaration on Fundamental Principles and Rights at Work, and the UN Universal Declaration of Human Rights.”

Amazon also claims to “respect freedom of association and our employees’ right to join, form, or not to join a labor union or other lawful organization of their own selection, without fear of reprisal, intimidation, or harassment”.

Companies that endorse global and human rights labor standards often behave in a way that violates those standards, but Amazon provides an extreme example of this hypocrisy.

Despite its documented commitments, Amazon’s behavior in the current Retail Wholesale and Department Store Union (RWDSU) campaign to organize workers in Bessemer, Alabama – its first union election since 2014 and perhaps the most important union campaign in the U.S. for several decades -- and its anti-union behavior over the past several years, suggest that these stated commitments are simply a PR exercise.

Rather, it appears that the company is prepared to do whatever it considers necessary to stop its employees from forming a union.

Amazon’s anti-union campaign: harassing workers at home and in the bathrooms 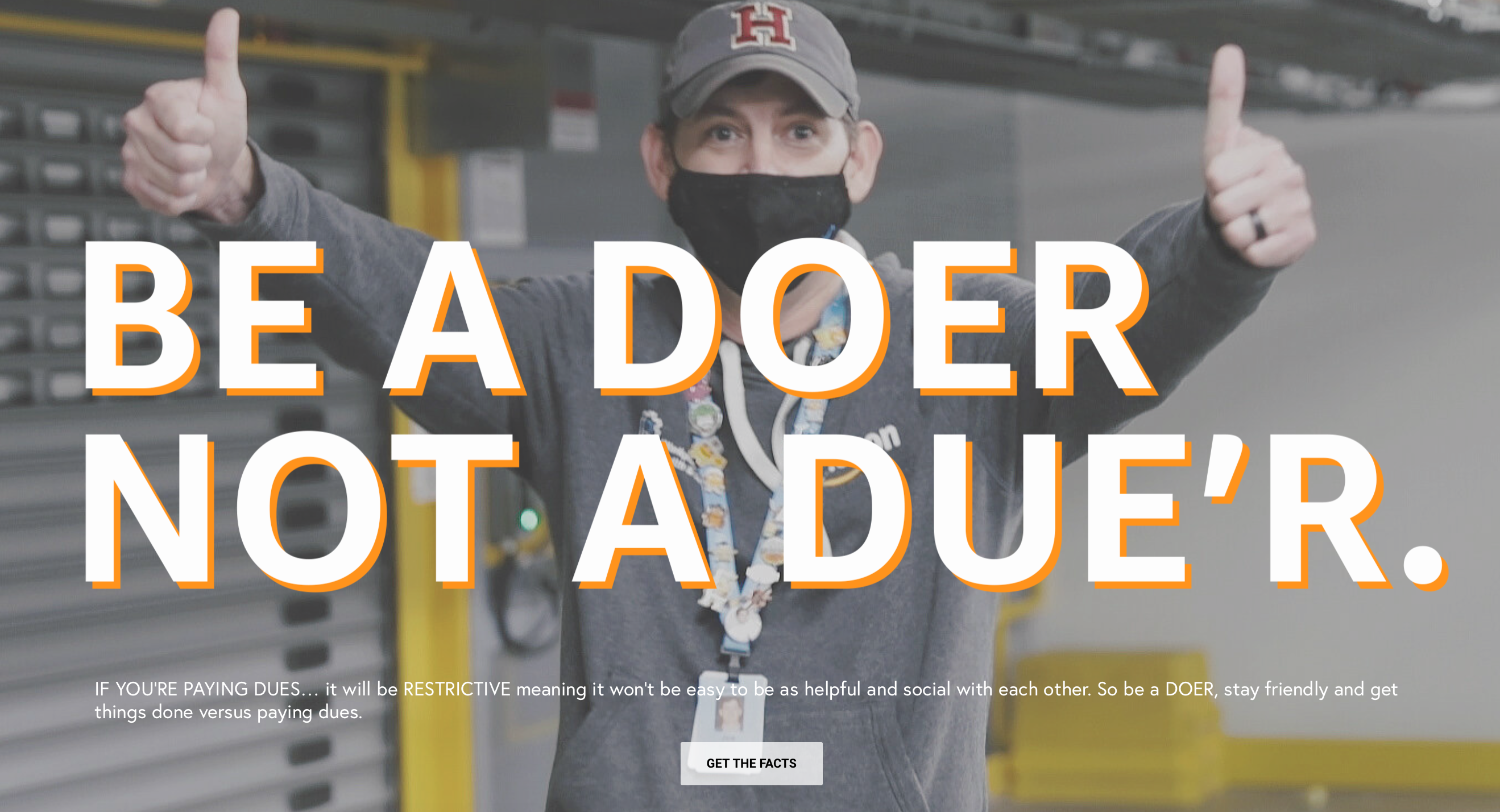 Contrary to the requirements of behavior demanded by global labor standards, Amazon is conducting an aggressive union-busting campaign in Bessemer.

The corporation has hired a powerful anti-union law firm; sent mass anti-union text messages to workers’ phones on a daily basis; created an anti-union website that is full of tried and tested disinformation designed to mislead and confuse workers; held mandatory anti-union “captive audience” meetings within the plant, which workers can be fired for refusing to attend, even though doing so could put them at additional risk of Covid-19 infection, and subjected workers to anti-union propaganda even when they visit the stalls in the bathrooms at the Bessemer facility.

Leading global human rights organizations have criticized Amazon’s aggressive anti-union tactics. Amnesty International has accused Amazon of “targeting and intimidating” workers involved in labor activism, and when the company advertised for intelligence analysts to spy on “labor organizing threats” – the most brazen example of corporate anti-unionism in decades – Amnesty reminded Amazon that unions  "are a right, not a threat".

Human Rights Watch recently wrote about how Amazon’s anti-union tactics at Bessemer “spotlight the need” for stronger legal protections for the right to choose a union in the United States.  Amazon’s aggressive anti-union practices in the United States and other countries have also been criticized by several leading anti-poverty NGOs, including Oxfam, War on Want, and Green America, among others.

In addition, Amazon’s anti-union actions have been criticized by multiple human rights, civil rights, religious, and community organizations, including the ACLU of Alabama, Alabama NAACP, Greater Birmingham Ministries,  and the Poor People’s Campaign.

Amazon’s anti-union actions at Bessemer have attracted widespread political criticism. On February 5, thirteen U.S. Senators -- led by Sherrod Brown of Ohio, Corey Booker of New Jersey, Elizabeth Warren of Massachusetts, and Tammy Baldwin of Wisconsin -- wrote to Amazon CEO, Jeff Bezos to express concern that Bessemer employees had “received misleading text messages, been overwhelmed by anti-union propaganda, and faced attempts to force in-person voting  during a pandemic that has resulted in the deaths of [nearly 500,000] Americans. All of these efforts represent disgraceful attempts to coerce Amazon employees out of exercising their voices and their rights under the National Labor Relations Act”. 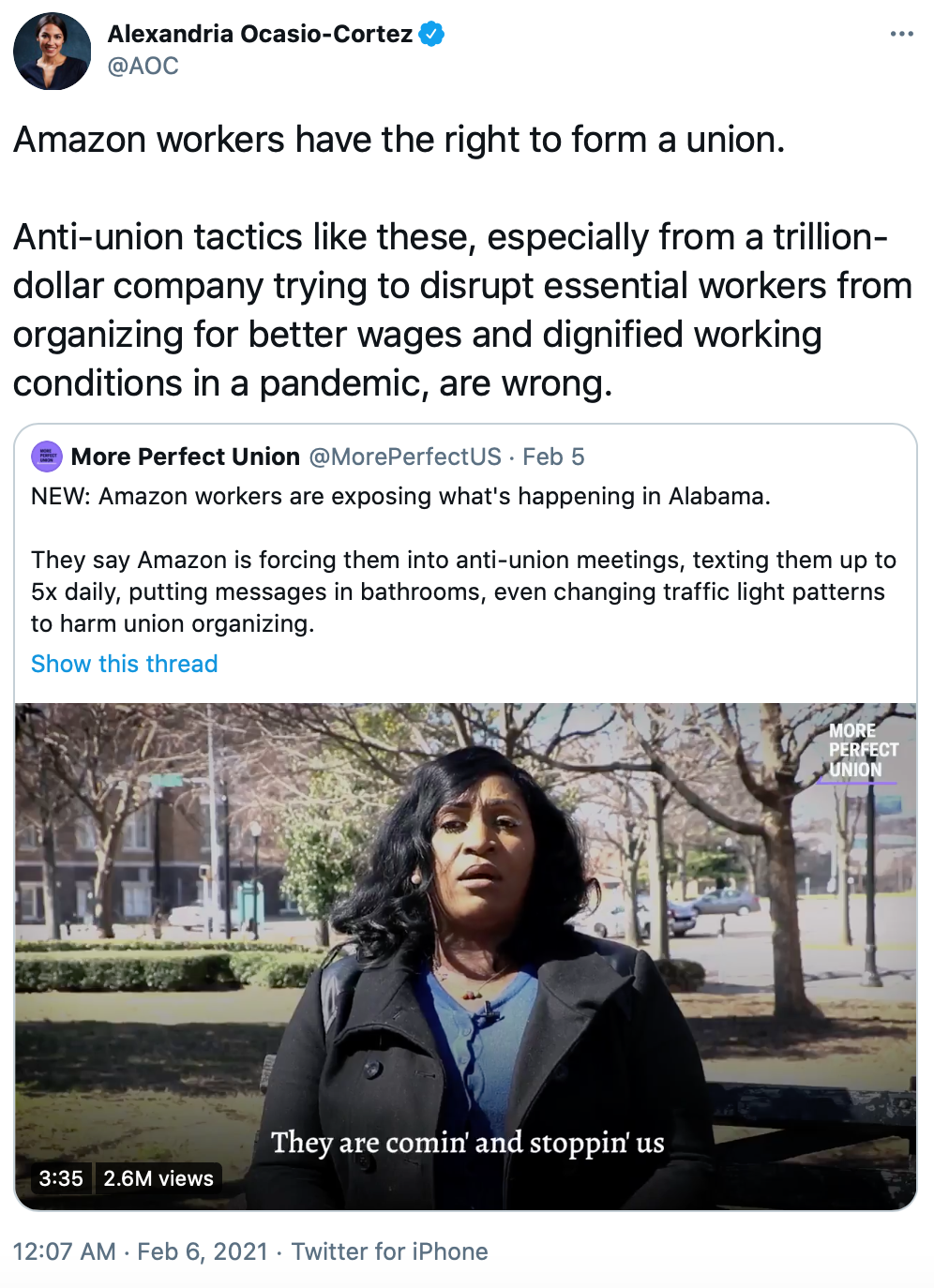 Members of the U.S. House of Representatives, including Alexandria Ocasio-Cortez, have also publicly criticized the company’s anti-union actions at Bessemer. On Tuesday, four state treasurers from Illinois, Wisconsin, Colorado, and Delaware wrote to Amazon to request that it “take immediate measures to address the situation at Bessemer facility and implement its stated commitment to ILO Core Conventions, the ILO Declaration on Fundamental Principles and Rights at Work, and the UN Universal Declaration of Human Rights”.

Last week, the Financial Times reported that a group of Amazon investors, who collectively manage more than $20 billion in Amazon shares, called on management to stop interfering with the workers’ right to choose a union in Bessemer. The group includes the controllers for both New York State and New York City, and institutional investors from several European countries.

Amazon has also been repeatedly criticized by European lawmakers for its anti-union actions in Germany, Poland, United Kingdom, France, Spain, and Italy. In October 2020, after Amazon advertised for intelligence analysts to monitor the “threat” of labor activism, 37 European Union lawmakers sent a letter to CEO Jeff Bezos, expressing concern about whether European countries were “affected by this approach to ‘threat monitoring,’ which aims to repress collective action and trade union organizing”.

What must Amazon do?

To date, we have seen a long-running and profound mismatch between Amazon’s public commitment to global labor and human rights standards and how the company behaves in practice when workers try to form a union. Amazon must adopt the following measures to make good on its stated commitment to ILO Core Conventions, ILO Declaration on Fundamental Principles and Rights at Work, and UN Universal Declaration of Human Rights.

The RWDSU campaign at Bessemer is critically important: if these Amazon workers are successful in exercising their right to freedom of association, it would set an important precedent for Amazon workers in the U.S. and around the globe.

Symbolically, a union victory at Bessemer would be the most important labor rights development of the past half-century.