ChitterChat: the 'socially acceptable' way to expand your network

Isaac Joy is building a platform to encourage people to connect with others, and “take away the stigma that actually expanding your network is weird”.

At the beginning of February, Isaac Joy sat down and asked himself: “how would I like to use the internet?” A month later, he had created ChitterChat, a networking platform that encourages users to meet others online by connecting them with one new person each week.

“I realised social media isn't that good really for expanding your social network, it's more about consuming media from people you've probably already met in your life,” says Joy. “So many current social networks are just doomscrolling time killers.”

Many studies have suggested that social media makes us feel more lonely -- and over the past year, lockdowns and stay-at-home orders designed to slow the spread of Covid-19 have made us feel more isolated than ever. Young adults have borne the brunt of this. A study published last year surveyed 1,008 people aged 18–35. 80% of participants reported “significant depressive symptoms” during the pandemic.

Joy, who studied computer science and artificial intelligence at The University of Sheffield in the United Kingdom, wanted to build a platform that allowed people to connect with others, and “take away the stigma that actually expanding your network is weird”.

“I see my dad at the moment, he's a super interesting guy, but because he's a little older, how should he meet new people? and if I want to meet new people outside of work, school, or university - what’s an easy and importantly, acceptable way to do that? If I just started adding people on Facebook, people would get a little weirded out.”

In today’s age of isolation and social distancing, the intimacy of voice and video has made real-time audio platforms much more appealing. Since voice chat app Clubhouse was launched in April 2020 last year, it has attracted over two million weekly active users. By January 2021, it was valued at $1 billion. Facebook and Twitter, are scrambling to keep up, and rumours have been circulating about new audio-based projects such as Fireside and Twitter Spaces. It’s hardly surprising that after ChitterChat launched on Product Hunt, it gained 400 new users overnight. 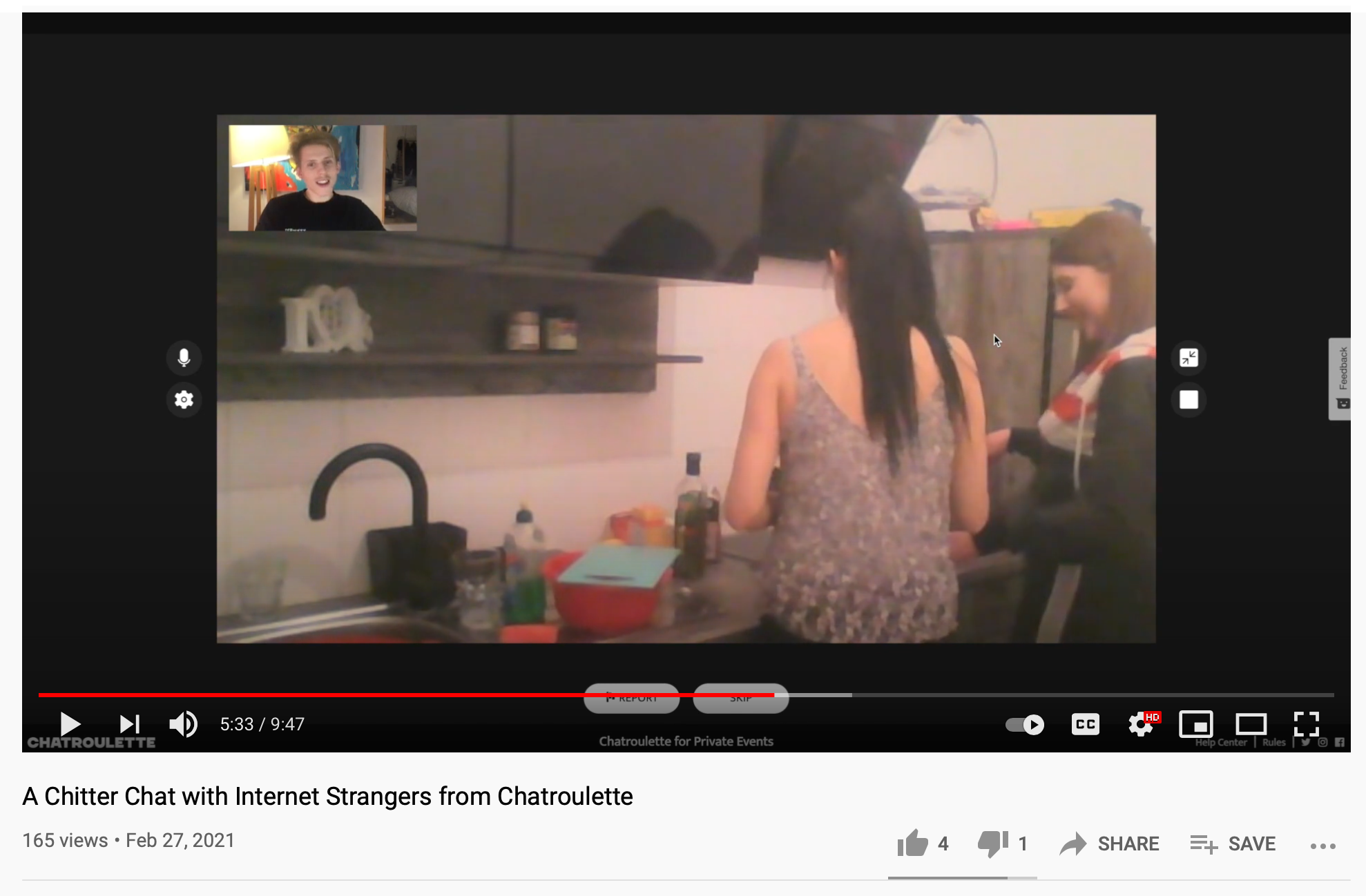 Before creating ChitterChat, Joy headed to Chatroulette to do some research about why people were using the platform, and what they wanted to gain from it. He also recorded his experience and published it on his YouTube channel. Among the people he interacted with was a woman from Ukraine who was using the platform to learn English, two women from Germany who were recording themselves cooking, and a man from Denmark who was making a fire outside and talking about his life. There were also lots of snippets of topless men, a few crotch shots, and someone holding up a piece of paper that read: “flash your boobs”.

Bumble’s networking app, Bumble Bizz, was launched in 2017. The networking service does not interact with the dating service, but Joy suggests that many people feel uncomfortable at the idea of networking in the same space that they use for dating. “I have this analogy,” he says. “It’s like going to McDonald's for coffee, right? They make coffee, but it's still not really the purpose of the place. You'd rather get your coffee from Costa Coffee.”

Omegle -- another platform that inspired ChitterChat -- is a free live chat room that allows people to connect with anyone from anywhere in the world. Many people have turned to Omegle during the pandemic to connect with others and stave off loneliness, and last year Omegle went viral on TikTok after popular influencers recorded themselves using it to surprise fans.

But Omegle has been in hot water recently, after a BBC investigation revealed that children have been using it to expose themselves to strangers. The platform is designed for users over the age of 18, but since there is no regulation or age verification, it is easy for underage users to gain access. 15-year-old Keira from the US sums it up well: 'Men being gross'. TikTok has now banned sharing links to Omegle.

“There are no creeps on the platform [ChitterChat] like there are in immediate live chat platforms -- Omegle -- and there are no dating undertones like I personally feel there are in Bumble's networking app,” says Joy.

To add a level of verification to the platform and avoid this issue, ChitterChat ties online identities to platforms such as Twitter and LinkedIn. As it stands, Joy has been manually checking the accounts of every new user that signs up. If people behave inappropriately, other users will be also able to report their accounts.

At the beginning of the year, Joy decided to launch one new project every month. He’s been documenting his progress through YouTube videos. His channel currently has 762 subscribers who are following his journey.

When setting the target of creating a new project each month, Joy took inspiration from Peter Levels. In 2013, Levels ‘reset his life’ by selling all of his belongings and moving across the world. Over the course of 12 months, he created 12 startups. His startups included Nomad List, a global community of remote workers living around the world, and Remote OK, a job board for remote workers. After several years, Levels was earning over $1M a year from the companies he’d built.

“He's the OG for this 1 startup a month thing and I watched him essentially change his life in the biggest way possible when I was at university. It was super engaging and I just wanted to try the same thing myself. I have a lot of ideas too,” says Joy.

Joy’s first project was taken.to, a simple page builder. “It's made like $1k in the lifespan of the project and to be honest, I spent 6 months building it in the last lockdown so that was an eye-opener for me that I just shouldn't spend so long building things.”

His most successful project so far has been Buzzbomb, a marketing B2B platform that allows brands to search for influencers to work with.

A recent revenue screenshot from Buzzbomb

“It makes $1k MRR and is possibly the one I will default to, to earn money in the rest of the months. I see it being as a super all-in-one bundled platform for marketing,” says Joy.

Over the next couple of months, Joy plans to take a break from creating new projects so that he can focus more on the ones that he already has up and running -- particularly ChitterChat. “I've been building things in the past which are more focused on earning money but this one is actually to do some good in the world and feels like something which will provide a lot of value to people of different backgrounds. So I guess it also gives me some purpose in my life,” he says.

“I can do a lot in a short period of time. That’s probably the biggest thing I’m going to take away from this.”