8am this morning, and by the time I arrived at the corner of 19th and Dolores in San Francisco’s Mission district, only two protesters had showed up. Still, the street was already teeming with tripods and booms and audio equipment. A pair of cattle gates were propped against a nearby wall and an ominously full-looking, covered baby carriage waited next to them. On the ground was a bullhorn. KPIX and KRON vans were parked across the street.

I chatted briefly with a German man who works for NEON Magazine, a culture affair out of Germany.

“This story is a huge thing in Germany, I think because it makes the whole Silicon Valley thing more tangible,” he said.

By the official 8:30 start time, a few more protesters and several more press folks had wandered up to the corner.  There were representatives from local TV news outfits, Reuters, National Geographic, 48 hills, SF Weekly and a documentary movie crew. And the San Francisco Police Department. All standing around, and waiting for something to happen.

As a man in a cowboy hat and untied Wolverine boots began drumming with his hands on a marching-band tom, the circle of reporters tightened around him. At that point I counted thirty people in all, 16 of them with professional cameras, audio-equipment or scribbling furiously into notepads.

The man with the drum was joined by two women who led the crowd in anti-eviction chanting. The press corps silently took it in.

“Ellis act out, tenants rights in!”

“They’ve been taking over our bus stops and paying $1. Is that right? No!”

“Whose home? Our home! Tech industry’s home? No!”

“What do we want? Stop the evictions. When do we want it? Now!”

"San Francisco is not for sale!"

That last one sort of killed the momentum for a moment, it being a mouthful. But the drumming continued and soon the bullhorn was bleating again.

While this was going on, a Google shuttle rumbled down Dolores street. It passed without incident and nobody seemed to pay it much mind.

The occasion for all this was what promised to be a grand slam case of tech-industry fueled eviction. Jack Halprin, head of e-Discovery at Google, had issued an Ellis Act Eviction to tenants in the pretty if non-discript Victorian he owns on nearby Guerrero Street. The tenants being evicted include two teachers and their children, a disabled person and an artist.

The press release said protesters intended to blockade a Google shuttle and demand that Google lean on Halprin to rescind the eviction. But by 8:45, no Google buses had attempted to enter 19th Street at the Thermopylaen gate where the protesters intended to engage their foe. The protest had apparently been sniffed out, the buses rerouted.

A decision was made, based, it seems, on good intelligence (is there a mole inside Google?), to reposition the protest on the busy 18th Street corridor just a block away. Almost immediately, the protesters had a big fish in their net, a Mountain View-bound bus was hemmed in and resigned to idle (which has adverse environmental impacts, as per last week’s Pilot Program appeal.)

For about 20 minutes, the protesters laid out their case against Halprin. There were sincere testimonials by the tenants being evicted. Then a robust police cordon gingerly prodded the crowd towards the curb. No one resisted, and two police vehicles escorted the bus away.

Regrouping, the protesters and their press cohort marched a couple more blocks to set up on the steps of the house in question, unfurled their signs once more and took to the bullhorn yet again.

“Jack Halprin is evil! He must go! Google is evil! It must go!”

In the past weeks, I've written about being kicked out of public meetings or asked not to take notes by some of the same people who today looked deep into the gaping eyes of the TV cameras and stated their claims.

The media event concluded, the protesters moved along and the press began packing up their equipment. By almost any measure, the protest had been a success. It stopped the bus, issued its demand, explained its positions. Look for it on a computer monitor, TV set, print periodical and silver screen near you. 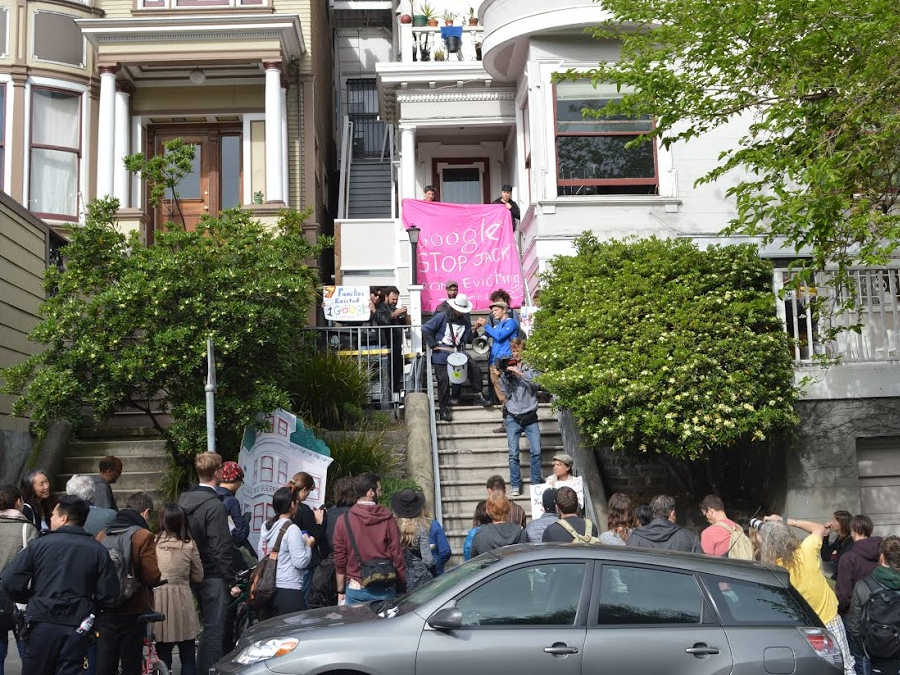 [images via Dan Raile for Pando]