A Recipe for Growth: Adding Layers to the Cake

Businesses don’t grow themselves.  One of the most important jobs of a CEO is to aggressively define and pursue a growth agenda for his or her business.  Why is this important?  Growth typically improves a company’s competitive position and provides increased scale and leverage, and investors clearly value growth.

The pursuit of growth continues to be important regardless of the lifecycle of the company.  Obviously it’s critical early in a company’s life... or it won’t be a company for long.  But it continues to be important as a company develops.  Virtually all businesses, even hyper-growth ones, almost inevitably experience slower growth as they get larger, with their growth rates falling relentlessly back down to Earth over time.  I call this effect “gravity” and it will weigh down even the most promising of companies—unless a CEO can find a way to accelerate growth and positively change the long-term growth trajectory of the business.

The first real operating job I had was managing eBay’s U.S. business in mid-2000, which included the ebay.com website.  Virtually all the revenue—and more than all of the profits—of the eBay company came from the U.S. unit at the time, and despite the bursting of the bubble, EBAY was still trading at highly robust multiples.  So you can imagine the terror I felt when the U.S. segment failed to deliver month-over-month growth for the first time ever in my first month on the job.  The heavy weight of sky-high growth expectations was showing the first signs of a potential collision with the brutal effects of gravity.

It was clear we needed to quickly define a growth agenda that had the scale to fight gravity’s impact.  We quickly narrowed the options down to a few: spend more marketing or spend it more efficiently, innovate the product, or buy a company to help us grow.

Marketing had some leverage, but it was limited.  eBay was already one of the biggest marketers on the Internet and efforts to optimize spend were already underway.  M&A, on the other hand, felt both desperate and was controlled in a separate part of the organization.  So we quickly turned our attention to focusing on product innovation.

One of the first places we looked for growth was in buying formats. eBay.com at the time enabled the community to buy and sell solely through online auctions. Many in the community thought this was the magic of the site, and it clearly helped propel the company to a very strong start.  But auctions intimidated many prospective users who expressed preference for the ease and simplicity of fixed price formats.  Interestingly, our research suggested that our online auction users were biased towards men, who relished the competitive aspect of the auction.  So the first major innovation we pursued was to implement the (revolutionary!) concept of offering items for a fixed price on ebay.com, which we termed “buy-it-now”.

Buy-it-now was surprisingly controversial to many in both the eBay community and in eBay headquarters.  But we swallowed hard, took the risk and launched the feature… and it paid off big: Buy-it-now complemented auctions well, brought new users and new listings to the site, and became a very important driver of growth for many years.  These days, the buy-it-now format represents over $40 billion of annual Gross Merchandise Volume for eBay, 62% of their total.

With an initial success, we doubled down on innovation to drive growth.  We introduced stores on eBay, which dramatically increased the amount of product offered for sale on the platform.  We expanded the menu of optional features that sellers could purchase to better highlight their listings on the site.  We improved the post-transaction experience on ebay.com by significantly improving the “checkout” flow, including the eventual seamless integration of PayPal on the eBay site.  Each of these innovations supported the growth of the business and helped to keep that gravity at bay.

The eBay company in its first decade is a good illustration of the impact of “layers on the cake”.  eBay U.S. was the company’s original business, and my team worked tirelessly to optimize it and add layers on top of it.  And at the company level, the eBay Inc. management team also looked to add layers.  Our first was international expansion, which started in earnest in the early 2000’s.  We followed with payments, facilitated by our acquisition of PayPal (and worth noting here that PayPal’s early growth was primarily as the payment functionality on the eBay marketplace).  Here’s what the result looked like at the company level: 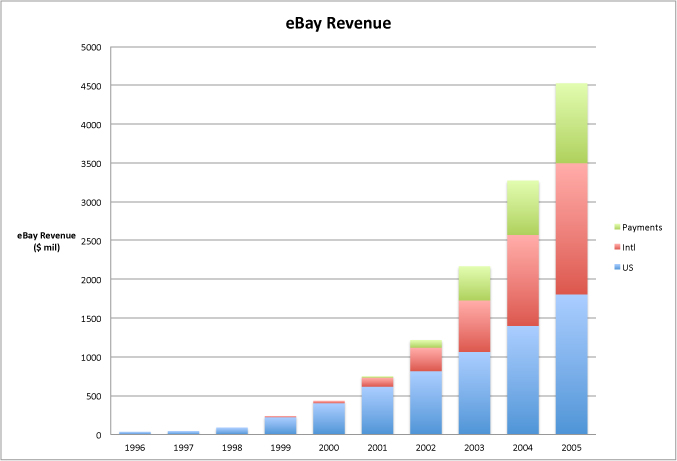 eBay U.S. clearly was a fantastic business in and of itself, and it demonstrated strong, sustained growth.  At the same time, the international and payments layers grew from virtually nothing in 2000 to around 60% of the company’s revenue by 2005.  As a result, the overall company grew dramatically faster than its original core business and successfully fought off the impact of gravity for a decade.

And the market rewarded the company handsomely for this growth.  Here’s EBAY’s stock price during the period: 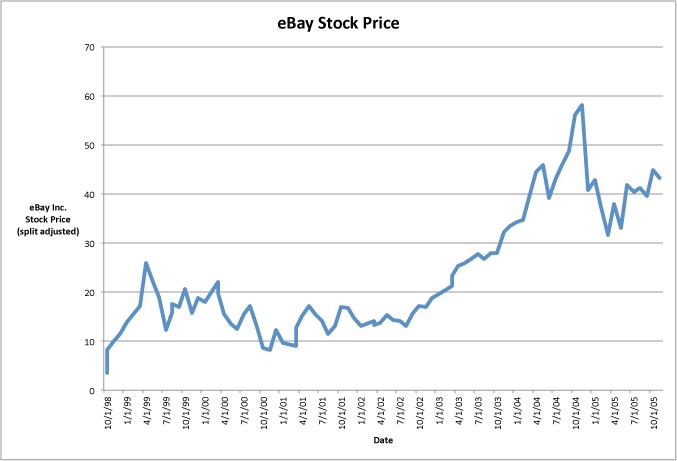 After eBay, I continued to deploy the layers-on-the-cake approach at the other Internet companies that I’ve managed.  At PayPal, the key layers we implemented there were international expansion, improving PayPal’s offerings for merchants who wanted to sell outside of the eBay platform (called “Merchant Services”), and starting to offer credit on top of our payments business.  We even trialed a text-based mobile payments product in 2006, although the market wasn’t quite ready for it at that time (I’m convinced the product’s developers and I were the only people who ever used it).

During my time at OpenTable, the key layers we introduced included building a robust set of mobile applications that expanded diner use cases, expanding internationally (again), introducing a new “Connect” product that meaningfully increased the addressable market of restaurants, and developing yield generation products that helped restaurants attract additional diners.

These initiatives helped OpenTable overcome gravity.  For example, year-over-year revenue growth rates accelerated from 23% in 2009 to 44% in 2010.

Two other illustrations of the success of this layering approach are provided by two of the most successful growth companies of the past decade: Apple and Amazon.  Steve Jobs and the Apple team relentlessly added new layers at Apple that sat on top of their original core business of computers, including the iPod, iTunes, the iPhone and the iPad.  And Amazon in recent years has innovated incredibly skillfully beyond their core physical merchandise business, adding layers such as Prime, digital goods, Amazon Web Services and the Kindle and now Fire digital devices.  These very large companies demonstrated explosive growth pretty much entirely through brilliant innovation.

Innovation clearly is THE success model on the Internet.  It explains how Google emerged as the dominant player in search, despite being relatively late to market and competing with established companies like Yahoo and Microsoft.  It explains how PayPal buried the other online payment sites that started around the same time, including billpoint.com and accept.com, despite these companies having preferred access to the massive eBay and Amazon platforms, respectively. And it explains how Facebook has come to dominate social networking, even though it was very late to market relative to Friendster and MySpace.

These winning Net companies are incredibly strong at product innovation.  They invest in it, they create cultures that support it, they prize it and they reward it.  The companies above that failed to capitalize on their early success arguably did not.  The best innovations improve and compliment the core business of a company, taking advantage of and enhancing its most valuable assets.  Diversification outside of the core business is a much more challenging strategy.  The further a company strays from its core in its innovation, the longer the odds of success.

I’m a huge believer in the potential for innovation to drive results for all companies, but particularly for technology companies.  Core to the CEO’s job is to rise above the day-to-day requirements to keep his or her vision far out on the horizon, proactively delivering new innovations today that have the impact to materially boost the long-term growth of the business in the future.