Today, Google is marking a "milestone" in their journey to make Google+ the dominant social network. The "milestone"? Pseudonyms.

You may remember last year, after Google+ launched, that many people tried to sign up for the service using pseudonyms. Shockingly, Google didn't want people to use pseudonyms, even if they were their de facto names. Instead, they forced users to only utilize their real names. This flew in the face of Google's marketing campaign, which advertised Google+ as a social network based on how real life works.

Like most technology snafus (save SOPA), that scandal quickly subsided. Google and whatever people used Google+ moved on with their lives. Which makes the announcement today a bit peculiar, as the outcry hasn't picked up recently. In fact, the only thing that has happened of note recently was the launch of Search, Plus Your World. Could they be related? Definitely Not.

Wait, it turns out yes. 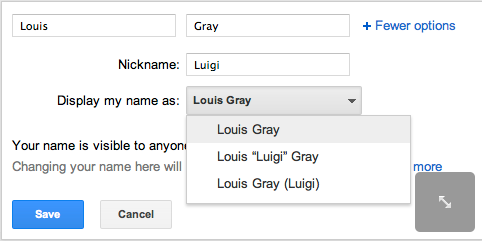 Let's take the hypothetical example Bradley Horowitz conveniently provides in his post on the change. You have an individual named Louis Gray, with the nickname "Luigi". Say you are Luigi's brother and go to Google Search. You search for Luigi, but because Google+ doesn't allow pseudonyms, you won't see your brother. You'll just see a Nintendo character. But wait! Google has finally allowed pseudonyms! So your brother updates his profile with the nickname Luigi. Now, when you search Luigi, you will see your brother. Amazing! Magical!

It is a jerk move for Google to hold off on pseudonyms when users specifically asked for it from the beginning. Instead, Google decided to wait until Search, Plus Your World was launched and underway.

What does this show us about Google? Well, a naive person would say that this was just a coincidence. But remember, Google has planned its social strategy out as a very slow roll-out, which presumably is still continuing. So it was planned that Search, Plus Your World would happen now. It also stands to reason that pseudonyms would be allowed now, once they became needed to make search work.

Search, Plus Your World wouldn't have worked if pseudonyms remained disabled. Instead, people would search and find nothing relevant (certainly not the Twitter and Facebook pages they were looking for). At the same time, Google+ would have been - marginally - worse at launch if they had accepted pseudonyms from the get-go. So what did Google do? They played dumb for a few months to get users to use their legal names, and then when Google needed pseudonyms, they are suddenly open to the idea.

The entire thing is a joke, really. Google waited as long as it could without hurting itself, then changed positions entirely. In the end, Google is doing what is best for the user, so long as it is also best for Google.