Earlier this week, I was looking over the report that came out by Semiocast of Twitter activity per country. The headline was that Brazil has surged to number two after the US. Not a huge surprise. It's a big country that loves social networks.

It was also not a surprise that Indonesia ranked high, although I would have thought the uber-social country of 240 million people who actually still love Blackberries would have ranked a little higher.

But the real surprise is how low the Twitter penetration is in India. It's a distant sixth, with just over 10 million accounts, compared with close to 20 million in Indonesia and more than 30 million in Brazil. 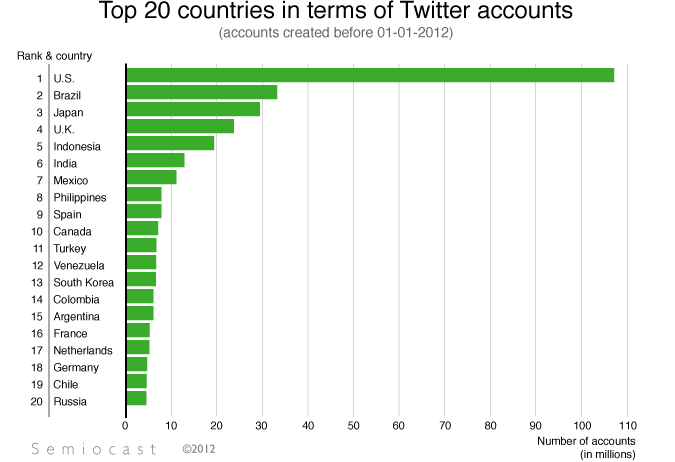 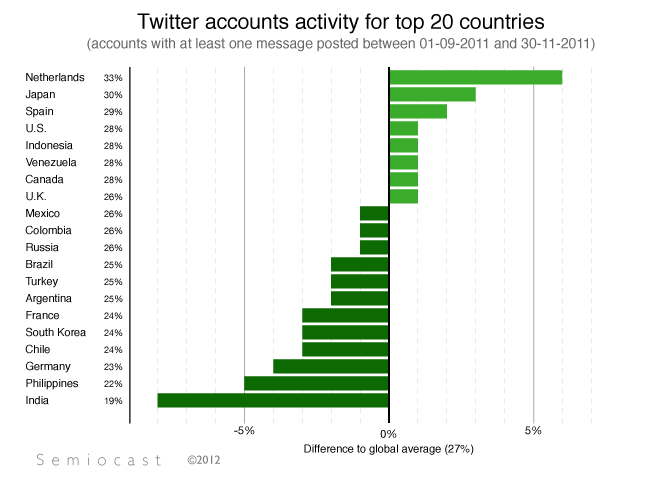 Meanwhile, yesterday I was looking at data on Glassdoor. India was the company with the second highest traffic.

Taken together these stats show what's so bedeviling about India. It seems like it should be a juicy mass market for the taking. It's the other country with more than one billion people, and it's the one that speaks English as the lingua franca and is a democracy. And top line numbers show that incomes should double in India from 2000 to 2020, creating more of a middle class.

This is the trap of India: The reality is just very different on the ground. People will get their nationalistic backs up about this post, but the stats don't lie. It's not a matter of national pride, it's a matter of business reality right now. Pretending a country is something it isn't yet, doesn't help any entrepreneurs trying to build companies there.

In fact, it's hurt India in the past because investors and Web companies have come in enthusiastically and then pulled out once the promises of the billion person economy didn't translate. So let's put emotion aside and look at the reality of each of these selling points.

1. Size. India does indeed have more than one billion people, but some 300 million live below the poverty line. Only 33% have access to modern sanitation, according to the world bank. Very few are on the Web-- less than 50 million by some estimates. Compare that to estimates of 400 million to 600 million in China. India's Web numbers are comparable to Brazil, and not too much more than Indonesia. So when it comes to the consumer Internet, India's gargantuan size doesn't yet translate into users.

2. English. English is the lingua franca, but it's hardly universally spoken. It's spoken in the business circles in the big cities but fewer than 20 million Indians even work in the formal economy, by some estimates. It's a drop in the bucket compared to the country's overall demographics. As Glassdoor shows, that niche can still be a meaningful market. But it's closer to the size of a European nation than China.

3. Democracy. Yes, it's a democracy in name, but a highly dysfunctional one. Democracy doesn't stop India from wanting to censor information, so some of the same thorniness and PR nightmares of doing business in China apply in India.

4. Middle Class. Incomes are going up dramatically, but it's even more binary than it is in China. Factories have given hundreds of millions of villagers a way into the urban formal economy. It may not be a job you or I would want to do, but China's factory boom has helped pull more than a hundred million people out of poverty in the last thirty years. In fact, 70% of the poor who've been pulled into the middle class in the last three decades have been Chinese. In India, "white collar" outsourcing jobs have given Indians a much bigger leg up than a factory job. But there are far far fewer of them. So overall figures about soaring incomes can be misleading.

This isn't to argue that India won't be a huge market opportunity for the Web at some point. It is a huge country, and the country is making progress at pulling people into modernity. But it's very, very slow: Across a host of indices like literacy, life expectancy and quality of life, India is improving at the rate of about 1% per year, according to the World Bank. And a lot of the top line metrics can be highly misleading-- as many VCs and entrepreneurs have learned the hard way.

But even knowing all of this, I'm still surprised that Twitter isn't doing better in India. Forgive the bird pun, but Twitter should be the canary in the coal mine for India's mass market going digital. Twitter works on every basic feature phone, and mobile is the one part of India's infrastructure that has been truly democratized. Innovative companies like VNL have pushed the price points for an Indian cell phone down to less than $6 a month in very rural areas. In cities, mobile phones are the affordable lifeline of the slum and day-laborer class. In other words, more than 500 million people in India have the technology to use Twitter.

Twitter doesn't rely on much local language customization either. And Indians are notoriously outspoken, loving to argue and debate anything. And, if you've ever spent time in Mumbai traffic, you know there's plenty of downtime with a mobile phone. Mumbai traffic makes Jakarta or Sao Paulo or Beijing traffic look like the autobahn. It once took me eight hours to get to one meeting. And it wasn't rush hour.

India seems like a country that should be Tweeting all over the place.