Not many sites want you to get offline as quickly as possible. HowAboutWe is one of them.

HowAboutWe's model is unique in its focus on the activity instead of the user profile (or more appropriately put, their "dating resume"). Users simply finish the sentence "How about we ____" with a date idea.

It makes sense, considering the entire goal of online dating is to actually go on a date. The song and dance of profile shopping, then messaging back and forth, then finally agreeing to meet, is extremely time consuming and, as we've learned in recent weeks, the whole matchmaking algorithm magic isn't much more than a marketing gimmick. HowAboutWe tries to cut to the chase.

As a result, the site's database is a treasure trove of interesting date ideas. It actually serves as a great trend tracker, making HowAboutWe an "accidental anthropologist," the New York Times noted when it launched. In March of 2010, tacos and tequila was the first date of choice for New Yorkers, but by April, Mexican was out and lobster rolls were in. The next month? Oysters. And so on.

It's the kind of stuff magazines and trend trackers (including the Times, presumably) pride themselves on uncovering. More importantly, that info is valuable to more than just the singles paying to use HowAboutWe's matchmaking service. HowAboutWe co-founder Brian Schechter says the site gets a decent amount of traffic from people not looking for love, but just looking for something to do.

So the next logical step is to capitalize on all that rich data. Unlike its competitors, the brand "HowAboutWe" doesn't scream "matchmaking." Which is why the company will, in the next three weeks, launch HowAboutWe Couples. It's a free service with lots of potential (as long as it doesn't get mistaken for a swingers site. That's the wrong kind of "cutting to the chase"). Basically, users in a relationship sign up for the service to get date ideas inspired by popular ones on its singles sites. The service will allow couples to coordinate on date plans and possibly even track places they've been (good for milestone-celebrating types).

Then, HowAboutWe will sell deals and experiences to the couples. Schechter is hiring a sales team to source local deals, which will be more Gilt City than Groupon, he says. They company doesn't want to deal in discounts, which is a fully saturated market, but in unique or exclusive 'experiences.' The benefit, though, is that it's social.

I think this is a great way to de-stigmatize the HowAboutWe brand against online dating-shy users. I don't feel like online dating has a stigma in New York, but I know plenty of people in other parts of the country who still view it as a shameful, desperate thing. If couples and singles are using the product, the brand could become more mainstream.

And, not to be grim, but if a HowAboutWe Couples couple breaks up, where do you think they'll turn when they're ready to get back out there?

As for the rest of the HowAboutWe business, Schechter says it's steadily growing in paid users and new regions. It had more than half a million dates posted in 2011 and has added more than 2,000 new users a day in 2012. The company is testing out various ways to acquire users through direct marketing and recently began experimenting with television spots.

HowAboutWe boasts that 55% of its users are women, which is important, because when an online dating site becomes to dude-heavy, its quality and growth in signups can deteriorate quickly, he says. Notably, HowAboutWe doesn't have much of a free option. Either you're paying the somewhat steep monthly fee of $72 for six months (or $28 for one month), or you can't send messages. Schechter believes the practice means its users are actually serious about online dating and the sleaze factor is diminished.

It's also growing on the partner side. HowAboutWe is featured on 22 sites including Eater and New York Magazine. The partnerships operate as a revenue share on new users. 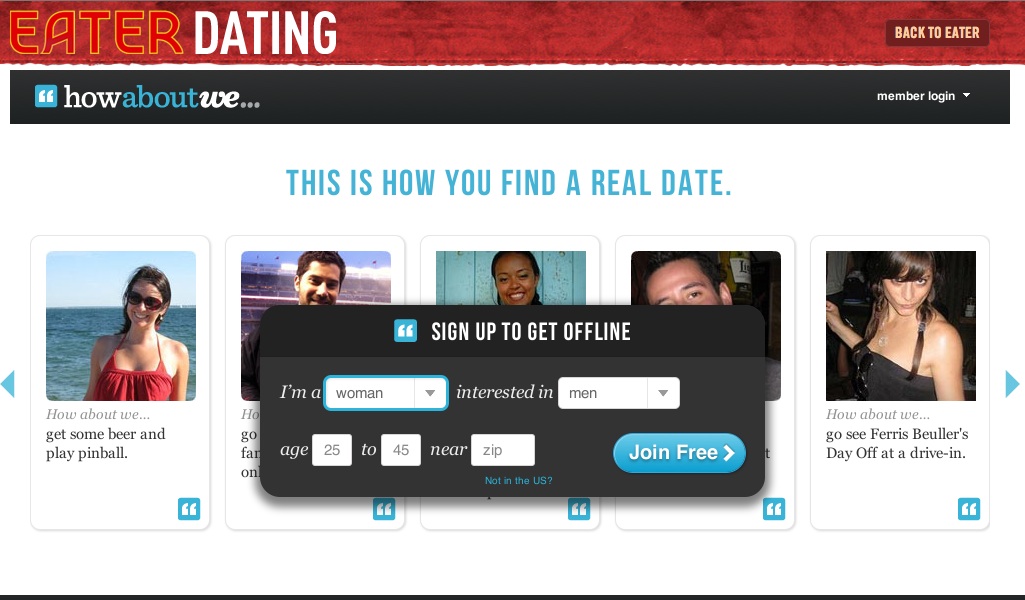 In November, the company raised a $15 million Series B from Khosla Ventures on top of a prior $3.1 million from RRE Ventures. It has 24 employees in its Brooklyn offices, and will add one engineer a month for the rest of the year.

The company has taken on an entrenched industry. There's Match.com, which has been around since the dawn of the Internet, and eHarmony, also old as hell, and IAC-owned OkCupid, which has a handle on the casually dating coastal hipster set. But none of the services have stayed with their matches after they're made. Where they leave off, HowAboutWe Couples will go in for the pickup.