We see the same evolution with every big, important, new developer platform. The frivolous apps come first, as people start to dabble with new tools: The iPhone guitars, quizzes, and projectile sheep.

Then we get apps that seem frivolous to the user, but are actually quite sophisticated under the hood. I'm talking about things like Zynga games and Foursquare.

Then there are apps sophisticated not only underneath but also in the app itself. These are the apps that make you step back and think, "Oh shit. This is how (insert iPhone/Facebook/other platform) can change the way I do everything online."

I had that experience last week when I saw Karma, a gorgeous, extraordinarily well thought through, new mobile gifting app. Karma is no quick coding job. The company controls the entire experience, with features including gift curation, in-house written descriptions and photographs, instant notifications of gift receipt, quick-and-easy thank you cards, delivery, and gift wrapping. And it takes out nearly every normal ecommerce friction point along the way.

Karma expertly leverages the smart phone medium to deliver a better gifting paradigm than the Web ever could. When I used it to send a (late) birthday gift to Erin Griffith tonight, there were a few little glitches, some small aspects that weren't quite as intuitive as they could be. But overall the app worked as well as advertised, and now Erin's knee socks, smartly printed with a map of Manhattan, are en route.

I look like an awesome boss, and all I did was scroll through some suggestions labeled "quirky," enter her email, and select a witty card. Seriously, that was it. I didn't  have to know her shipping address. Karma asks the person getting the gift for shipping information by virtually delivering a Paperless Post-like card and package, deliverable via email, mobile SMS, Facebook, or whichever platform through which the giver and receiver of the gift happen to be acquainted.

I didn't even have to enter a credit card number. Karma sends the gift and then shoots the giver a note later saying essentially, "Hey! She loved the gift! Now pay us." And, since the gift has already been sent, there's high social pressure to whip out that credit card.

If I didn't know Erin's size or color preference, I can leave it up to her to select it when she "unwraps" the virtual gift. That makes things that are typically hard to gift a lot easier. And if she doesn't like her Manhattan socks? She can exchange them in the app before it leaves the warehouse. She can even opt to give the $24 to Charity:Water instead. And although Karma will never tell me she exchanged the gift, the app can collect all that data as feedback for the merchants. ("Look guys, all women age 22-34 hate your Manhattan socks...")

Karma was started by Lee Linden and Ben Lewis. (Disclosure: Linden sent my baby a cute knit hat with little knitted earphones as part of the demo, which I'm totally keeping, as it's adorable.) Their first company was nowhere near this warm and fuzzy feeling. It was the mobile advertising company TapJoy, producing more than $100 million in revenues delivering ads, which mostly annoyed people. It merged with something even worse: The notorious scamville kingpin OfferPal. (Booooooooooooooooooo!)

Linden and Lewis wanted to do something that would make people happy, something their family and friends would gush about, and they came up with Karma. It's funded by Kleiner Perkins Caulfield & Byers, Sequoia Capital, Evan Williams' The Obvious Corp., Starbucks CIO Stephen Gillet, Felicis Ventures, and some unnamed angel investors. They raised less than $5 million starting last June, a stunningly low figure, given how many points of the cycle in which Karma is directly involved. They literally make partners wrap gifts in their own gift-wrapping material. It took months just to figure out  how to legally send Champagne anywhere in the US.

There are more than fifty launch partners including Magnolia Cupcakes, Crane & Co., Domaine Chandon, Gund, Jawbone, Kate Spade, and some other more surprising ones, like 23andme. ("Happy birthday! Find out if you may have a horrible disease in your future!")

On the surface, Karma is merely taking a slice out of the $100 billion gift card industry. But I think the app has an even bigger potential market than that. This app is about enabling fleeting impulse purchases in a way that's never been done before. It's the social commerce equivalent of grabbing a pack of gum at the grocery store check out. You see that someone got engaged in your Facebook news feed, and, rather than just attaching yet another "Congrats," you spend five minutes sending a bottle of champagne.

I felt bad for missing Erin's birthday, but would I have taken the time to get her address, go on Amazon, find something that I think she'd like, and buy it? I'd like to think I would. But I'd probably just keep putting it off, until the moment had passed.

Facebook was a game-changer for remembering to wish someone happy birthday. Karma could be the game-changer in pushing those lazy, good intentions a step further. 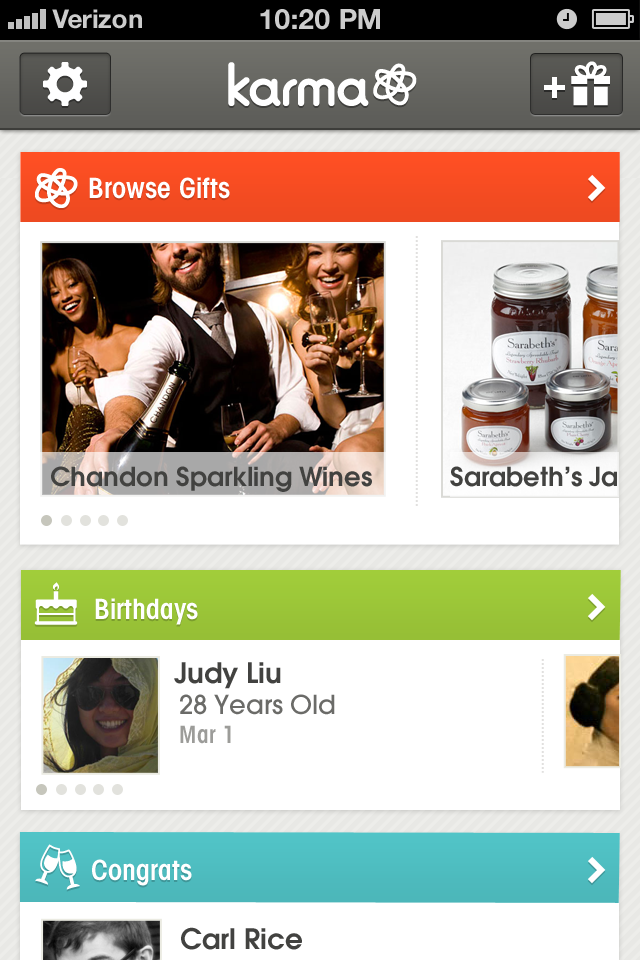 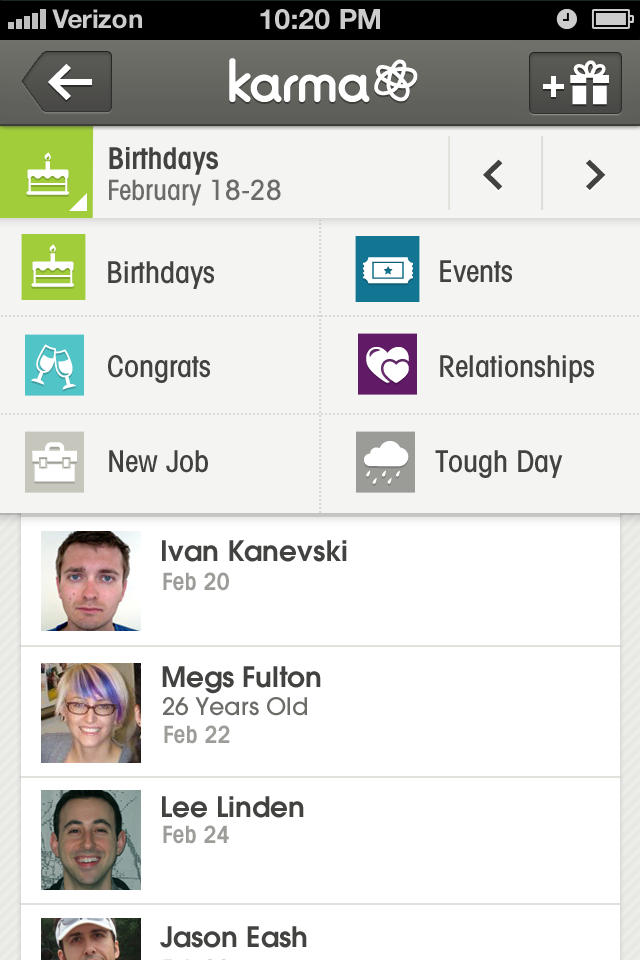 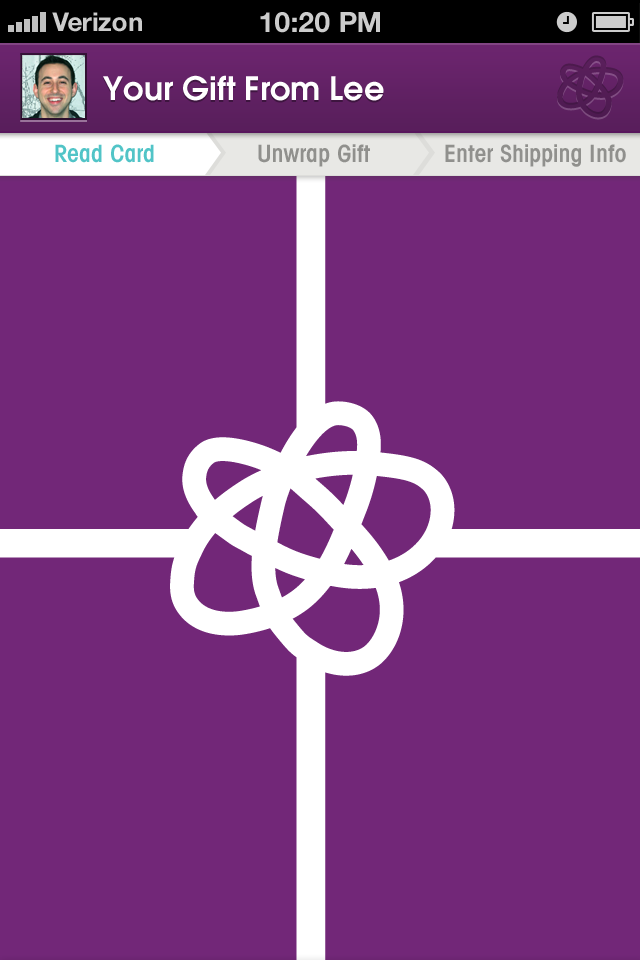 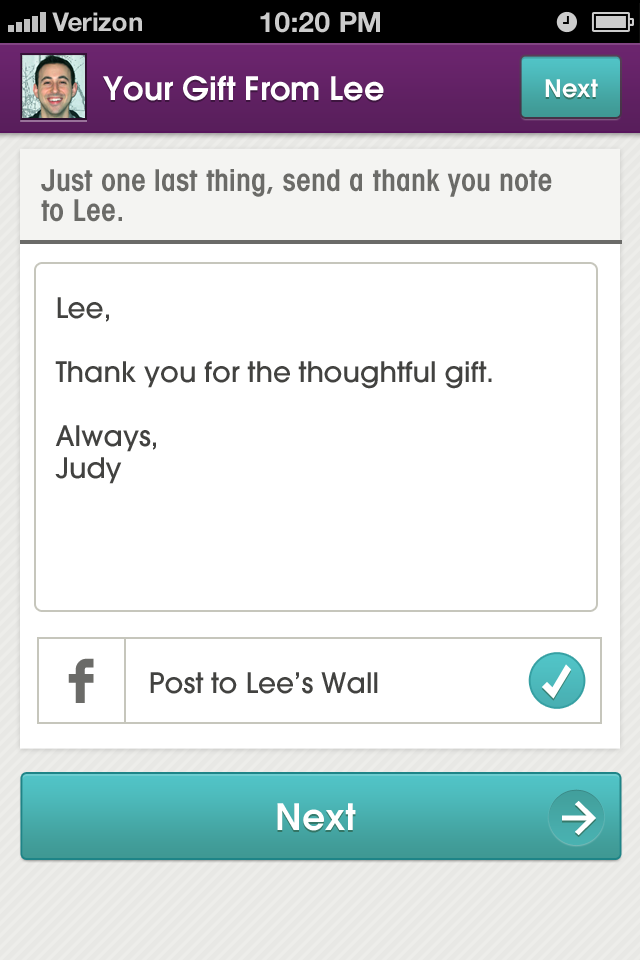 (Amazing photo of Trevor bursting through some paper with a gift courtesy of ShutterStock.)