Exec: It's Like TaskRabbit With A Twist Of Uber

Justin Kan is no stranger to the startup scene. As Justin.TV's namesake founder and the guy who found a company within his company with Twitch.TV, he's already got two successes under his belt. Three, if you count the rarely mentioned (and sadly now defunct) Kiko, which was acquired by Tucows in 2006.

While most would be content (or go crazy) in running two companies simultaneously, Justin is today launching a third. Called Exec, it's like TaskRabbit and Uber hooked up and made an Internet lovebaby.

Like TaskRabbit (Or Zaarly, or Agent Anything), Exec is based around the idea of paying others to do all of the things that you don't want to do (be it cleaning your house, doing your shopping, whatever.)

Unlike those other services, however, there is no bidding for jobs. You type in what you want done, punch a button, and your new temporary assistant (called an "Exec Assistant", or just "Exec") arrives. For every hour of work, it's a flat $25.

You don't even have to worry about picking someone for the job. Exec has its own workforce of assistants, each pre-screened and background checked. They'll automatically determine the right person for the job based on proximity and past experience. And if your request is too specialized, or otherwise out of their scope? You'll hear back within 10 minutes.

The whole experience is painted up from head to toe like that of Uber's on-demand-towncar service. I mean, just look at these two screenshots: 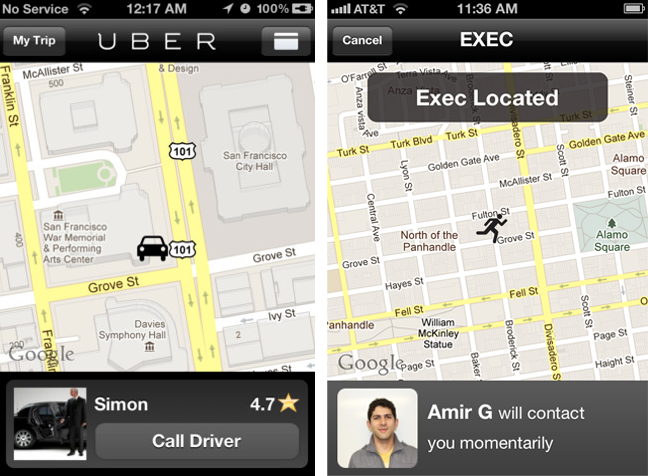 That's no accident. Justin openly admits Uber's influence on Exec's execution, and foresees quite a bit of overlap between the customer bases. It's the same underlying idea, really: some people are willing to pay slightly more for an effortless, custom-tailored experience.

The only times in which you'll pay more than $25 an hour is if you have your Exec purchase anything for you (during the friends-and-famiy Beta, for example, the company got overloaded with requests for last minute flower purchases on Valentine's day), or if there's any driving involved beyond getting to your location. In the case of a purchase, they'll charge you the price of the purchase plus a 3% fee. For driving tasks, they'll charge 50 cents per mile. Either way, everything is handled directly through the iPhone app.

Exec, like many a wild idea before it, was invented on the way to Burning Man. In a van full of Y Combinator founders, one realized something rather important: he needed to get his apartment keys from one side of the city to the other, and fast. The problem? They were already hours into their drive. After a bit of brainstorming and squawking into the phone, they managed to convince an Uber cab driver to pick up the keys and drive them, sans passenger, across town. There had to be an easier way, they figured — and thus, Exec was born.

Whatever the crazy backstory, I absolutely love this idea. As crazy as it may sound when I say it out loud, the process of having people bid for my job and having to weed through potential candidates is exactly what keeps me away from the services already out there today. I don't want to do all of that stuff. I just want someone to appear from thin air when I push a button.

Alas, I'm in the East Bay, and Exec is an SF-only service for now. You guys have all the fun.

You can check out Exec online here, or find it in the iOS App Store here