io/LA: Not Your Father’s Incubator, Now Open in Hollywood

Do you consider yourself part techie, part Hollywood? Well, if you’re in Los Angeles, looking to work at the intersection of these two worlds and have a bit of an entrepreneurial streak, io/LA will fit you like a custom tailored suit.

Part startup incubator, part co-working space, part public café, this new venture located on Hollywood Boulevard and fronted by the famous walk of stars is in many ways the antithesis of the dozen or so comparable spaces which have opened on the west side of Los Angeles in the last year.

This distinction will never be more on display than this past Thursday evening at its launch party, which would have made Harvey Levin excited. While the long term goals of io/LA are all business, this evening’s festivities were anything but.

It’s up for debate whether the event was meant to attract resident entrepreneurs or merely entertain and reward its founders, backers, and future partners.

A young entrepreneur in attendance, who is also a current member of another prominent LA incubator, remarked on the contrast saying, “Wow, our launch party was 30 dudes, pizza and beer. And our conference room table is a folding card table. But no one will ever accuse us of not running lean.”

Io/LA is an offshoot of its more traditional San Francisco cousin, i/o Ventures (a space which housed a certain Pando Daily founder for a period during the company’s early days). Both i/o’s were founded by former MySpace CTO Aber Whitcomb, with a team of partners. For his Hollywood incarnation, where Whitcomb says he will focus on companies involved in digital distribution and efficient content creation, he has brought in as founding partners actor/producers Donovan Leitch and Chris Gartin (pictured above).

Mentors within the program span technology and entertainment. Those on the tech side of the table include Whitcomb’s good friends and former MySpace co-founders Colin Digiaro and Josh Berman, currently CEO of Social Gaming Network and BeachMint respectively, as well as Gobbler founder and CEO Chris Kantrowitz, Electus founder and CEO Ben Silverman, and Postcard on the Run founder and CEO Josh Brooks. On the Entertainment side, Whitcomb has thus far announced partnerships with A-list actors Terrence Howard and Kate Walsh, as well as artist Shepard Fairey, notable for his Obama “Hope” poster.

No disrespect to the first bunch, but the mix is heavier on blockbuster films than blockbuster IPOs, and there's no telling how involved the Hollywood names will actually be.

Io/LA officially opened its doors yesterday and has begun accepting applications for its first quarterly class of five to six incubated companies. (You can apply here.) Members of this class will receive typical compensation of $25,000 and three months of mentorship and office space in exchange for 8% of their company. Whitcomb and co. have raised $1 million thus far from Bob Zangrillo’s Dragon Capital, “physical social network” neighbor WeWork, and the founders themselves. When asked to compare io/LA to other incubators in Los Angeles or Silicon Valley, Whitcomb said his aim is to be “lower-volume, higher-touch.” Being the only game in Hollywood shouldn’t hurt either. 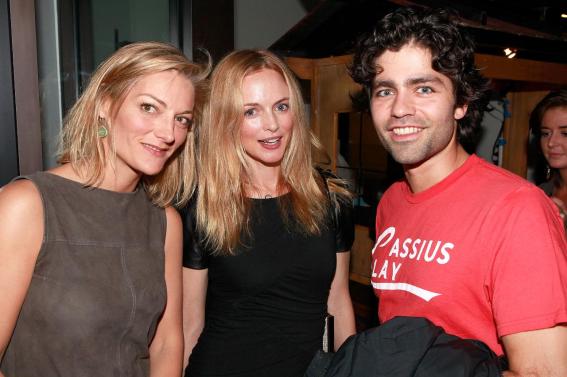 For those not looking for investment, io/LA will have space for up to 150 co-working members who must still pass an application process, vetting their technology, new media, and entrepreneurial chops. Whitcomb explained that the community and its ability to support creativity and innovation is his biggest focus, so selecting the right members will be essential. Membership will offer month-to-month, 24/7 access to desk space, conference rooms, private phone booths, and a post-production facility for filmmakers (offered in partnership with its upstairs neighbor WeWork).

There’s no doubt that there is room to better connect Hollywood and technology, a phenomenon which co-founder Gartin called “tech-ertainment.” In the past people in the Valley have had another word for that: Money losing. There's a thin track record of the two worlds netting actual returns, with the sprawling empire of Brian Lee -- with his friends the Kardashians and Jessica Alba -- more the exception than the rule.

With YouTube committed to investing up to $100 million for the production of original content, and Americans poised to consume more movies via Internet than physical media (DVD/Blu-ray) for the first time this year, the timing may finally be right as well. The question lies in whether this environment will allow it to happen.

With up to as many as 200 total members, io/LA may bump up against the natural limits for the size of a sustainable community. The broader question is really whether LA has enough viable startup founders and ideas ready to support the rash of incubators and accelerators launching simultaneously.

Going forward, io/LA will have to rapidly return to its business roots, lest resident entrepreneurs arrive each morning to a scene of sticky floors and empty bottles of Ketel One. Attendees better start trading in their stilettos, cocktail glasses, and paparazzi for the startup mix of hoodies, flip flops, and caffeine if io is going to deliver on these big promises.