Backstory: Push A Button, Custom Tailor Your Site For Each And Every Visitor

We, as website operators (and I say "we" because, well, who doesn't own a domain or three these days?), know a ridiculous amount about the people visiting our sites. Even if we don't really try to gather any information, we can generally determine what sort of device the user is visiting from, what website lead them to us, and which pages of ours they've seen, getting a rough idea of where they are in the real-world. Pretty much the only thing you can't tell is how many cats a visitor owns — and really, I'm sure that's hidden in the user agent data somewhere.

Why not use all that info to improve the user's experience, tweaking pages based on who's viewing them? Because you don't know how to code up that sort of trickery? Don't let that stop you. Backstory wants to be the on-the-fly site customization for the everyman.

Here's how it works, in a totally oversimplified nutshell: You take Backstory's code snippet. You drop it at the bottom of your site's code. You log in to their backend, and push buttons to create the rules that change your site.

"But Greg! I can do all of this already with my own code!"

Yes! Absolutely. All of this is totally doable on your own…if you're trained in the fine art of JavaScript sorcery. For the vast majority of the world's small business owners who look at code and see nothing but a mountain of things that they'll probably break, however, little marketing tricks like these just aren't a part of the playbook.

I spent a few hours dabbling with Backstory and walked away rather impressed. We've seen this concept executed for enterprise a few times before, but Backstory is clearly aiming for a different audience here. It's not really meant for the big guys who are just looking for a quick fix — it's for the people who really couldn't do this on their own.

There are a few parts of the site that could do well with a "Er, what does this mean?" button. The tool for replacing a bit of HTML on your site with something else asks for "the identifier of the element" you'd like to replace, for example — chances are, Joey McNoCode will have no idea what that means. For the most part, however, it's all quite self explanatory.

Backstory raised $250,000 from a bevy of individual investors last summer. (You can see all of their investors on AngelList). It's built by a team of just three gents: Mike Oliver, previously a startup lawyer and an early employee at Advertising.com, Andrew Sternthal, who ran Biz Dev at CDNOW leading up to its IPO back in '98, and Jesse Middleton, co-founder of New York's WeWork Labs.

Their pricing structure is a bit strange, something I've got to imagine will change over time. $30 a month lets you set up 10 rules across two domains and stores analytical data for 180 days. $80 lets you set up 25 rules on five domains and stores that data for a full year. That all seems a bit…complex for a product meant to be as straight-forward as possible. Fortunately, there's a free personal plan for those just looking to give it a spin.

(A fun side anecdote: while playing with Backstory, I ran a test banner on my personal site that slid down from above and simply read, "Derpyderpderp, derp." to anyone who came to the site. I then completely forgot about it for an hour or so. To the 40-or-so people who saw that banner: Yeah, er, sorry about that.) 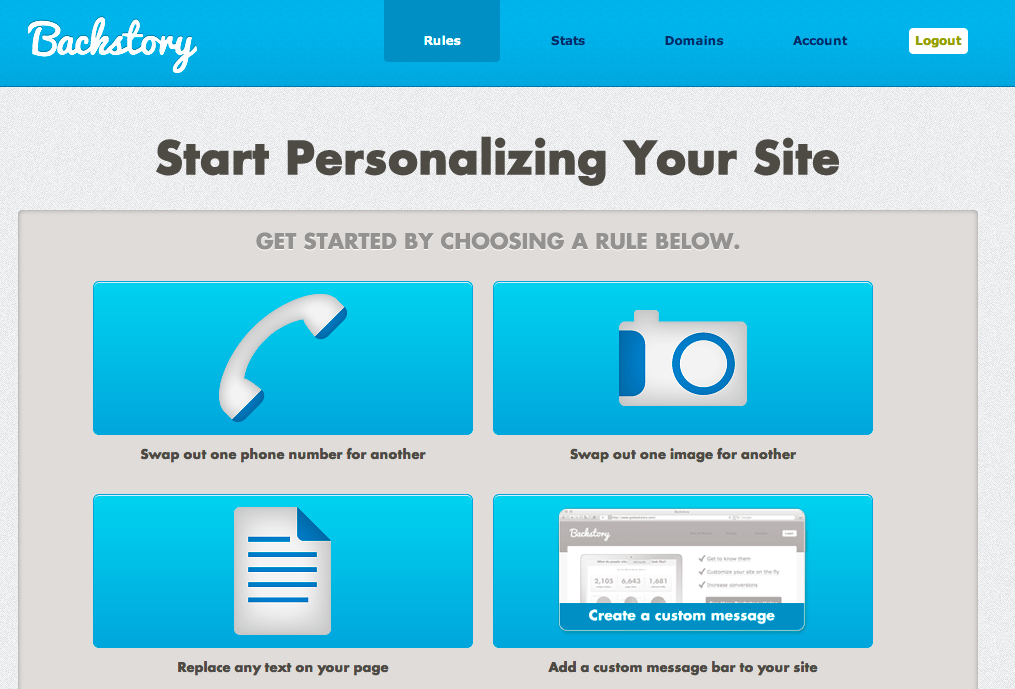