If a mobile browser adds voice navigation, and no one is around to talk to it, does it make a dent in the marketplace?

Dolphin, the Sequoia Capital funded iOS and Android browser known previously for its gesture based navigation, has integrated Nuance speech recognition technology, the engine behind Apple’s Siri, to launch its “Sonar” voice navigation for iOS.

Ranked as the ninth most popular mobile browser globally in February 2012 by StatCounter with 0.78% market share, Dolphin is hardly a juggernaut. After more than a year as an Android-only app, it was finally released for iOS in August 2011 following its 2009 launch. The browser app’s creator MoboTap reports approximately 13 million downloads to date across all platforms, with about one-third that number of current daily active users. The company says that navigation within other mobile browsers is a painful and cumbersome experience, problems which its gesture and voice control aim to solve.

I have four browsers installed on my iPhone: Safari, Opera, Atomic, and now Dolphin (an obligatory journalistic demo). The latter three sit in a folder I’ve named “Siberia,” along with other apps which I rarely call upon. Browser navigation has never been a problem for me, so I guess I’m not really the target customer. 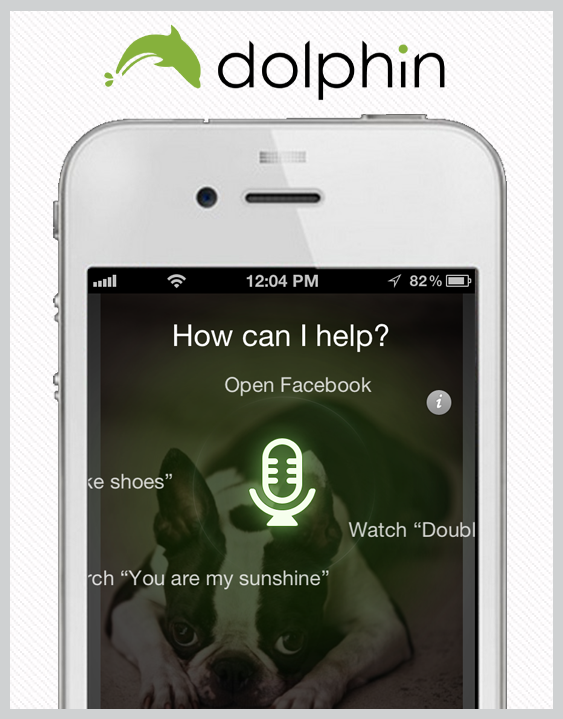 But Dolphin’s Sonar, which I got an early peek at, is at least entertaining and in some cases useful. Sonar is activated through a microphone icon in the Dolphin UI, or, even simpler, by shaking your phone. It allows touch-free Web navigation through speaking browsing commands such as Home, Refresh, Back, and Forward. More interestingly, Dolphin employs what it calls “enhanced lookup,” aiming to shortcut the number of steps required to arrive at a desired search result.

For example, when I spoke the phrase “eBay iPhone 4S,” Dolphin opened eBay directly and provided me with a list of available items, rather than simply presenting search engine results. Pretty slick.

Technically, this is a reduction from about three steps to one to get to my desired result. (MoboTap generously counts hitting "submit" as a step). I could see this being useful in the hypothetical case when I don’t have my hands free, not that I would browse the Internet while driving. *wink*

This enhanced lookup is currently available for more than 500 voice strings, including eBay, Facebook, Twitter, LinkedIn, Amazon, and Youtube, a list which is growing daily. It is actually fairly useful when seeking an exact result within a single destination, as opposed to going on an undefined Web fishing expedition. In cases where a non-standard search query is provided, traditional results from the browser’s default search engine Google are provided.

While MoboTap said it may in the future provide a virtual suggestion box to add voice strings beyond those currently available, something I – um – suggested, it was quick to point out that the existing commands are baked into the app, meaning they don’t require any user input or training.

Sonar is available in the iOS version for the first time today as a $0.99 paid in-app download. (It’s free on Android). This may make sense from a business perspective, given iOS’s platform dominance in app revenue generation, but it’s not likely to leave iPhone and iPad users feeling the love. Also, Android offers a free voice recognition API, while Nuance must be licensed, although comparisons between Siri and Android Voice Control on language processing alone have left the latter wanting. 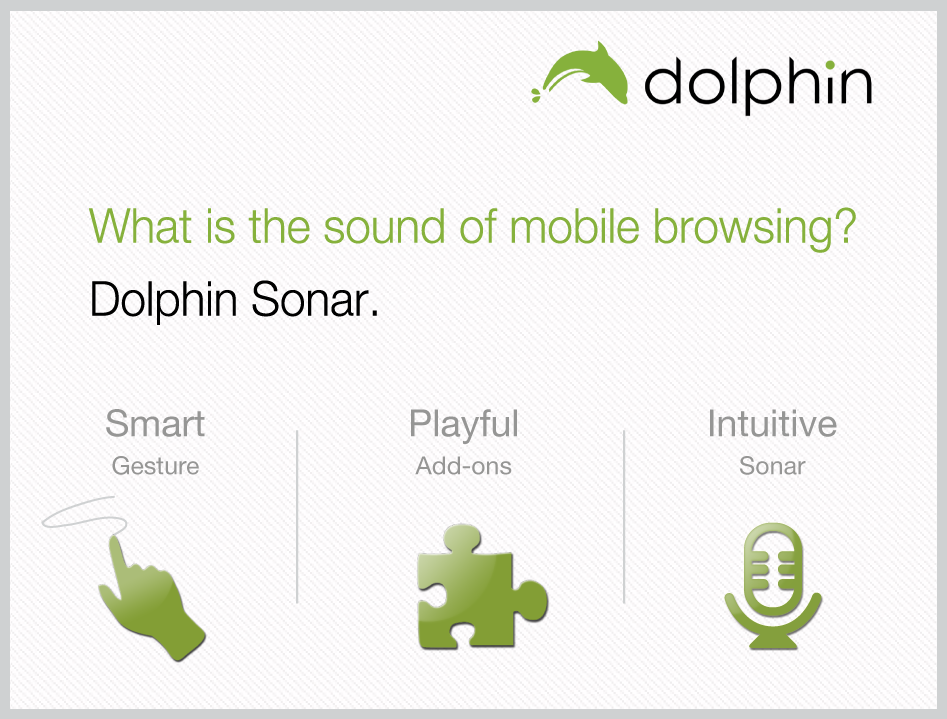 I spoke to Nuance’s Matt Revis, VP of Product Management and Marketing, about Dolphin and the case for voice recognition technology in general. He said, “We really appreciate the vision Dolphin is bringing to speech enablement. We think they’re part of a leading group of developers who are really pushing the envelope in creating new ways for users to interact with their devices.”

He also described the different use cases for Dolphin, Siri, and Nuance’s own iOS voice control app, Dragon Go. Revis reiterated that Dolphin with Sonar enables users to navigate the Web in a completely hands free manner with a number of built-in search efficiencies.

On the other hand, Siri is really good at controlling core apps such as notes, calendar, phone, and messaging as well as select searching functions, but not much else. Dragon Go falls somewhere in the middle offering device content search and application launching. Unsurprisingly, both Nuance and MoboTap declined to comment on whether the existence of Dolphin Sonar offered any hint of Siri’s future integration into Safari.

Beyond mobile devices, Nuance is also the powering force behind a number of additional voice recognition implementations, including within televisions, set-top boxes, and upcoming automotive integration. It’s not a stretch to say that voice control and semantic search integration appear to be going mainstream.

While Dolphin may not be the shining star in the space at the end of the day, it does deliver as advertised and marks a step in a positive direction. Praise from the browser’s existing dedicated user base can be expected. The deciding factor in its ultimate success will be whether it can gain traction beyond those looking for cool new party tricks or freeway multitasking solutions.