PayDragon is the Express Lane Resting in Your Pocket

I'm not even going to bury the lede here: Yes, there is a reason to use an electronic payment service like PayDragon even when the Pay with Square application exists. As nice as it is to walk up to the counter and tell the barista your name, PayDragon has one clear advantage: Skipping that line entirely.

I was initially skeptical about PayDragon. I first heard about the application-slash-service from one of the many SXSW posts, discussing new technologies in play at the overcrowded conference, and I couldn't think of why someone would choose to use PayDragon over something that's already been established, like Square. CEO Hamilton Chan must have known that I would have to ask about the giant white polygon in the room, because one of the first things that he explained was how PayDragon was different from Square.

With Square, users pay by opening a tab with a compatible restaurant/bakery/whatever, waiting in line, and then telling the customer service rep to "Put it on [their name]."  Anyone that has waited behind a middle-aged tourist, struggling to find the exact change or that one guy who always forgets his credit card (guilty) can attest to how nice this is, just from a waiting-in-line standpoint. In fact, the only thing I can think of that's better than making the standing-in-line experience better is allowing me to skip that ordeal entirely. And that's exactly what PayDragon does.

As soon as you launch PayDragon, you're shown some photos of available items. The service is primarily in use by restaurants and bakeries at this point, but Chan said that there are plans to expand into other areas of commerce in the future. I was shown just a few of the items that someone can purchase, and I've got to say that I've never felt more envious of the West Coast than when I saw peanut butter cup ice cream sandwiched between two red velvet cookies. 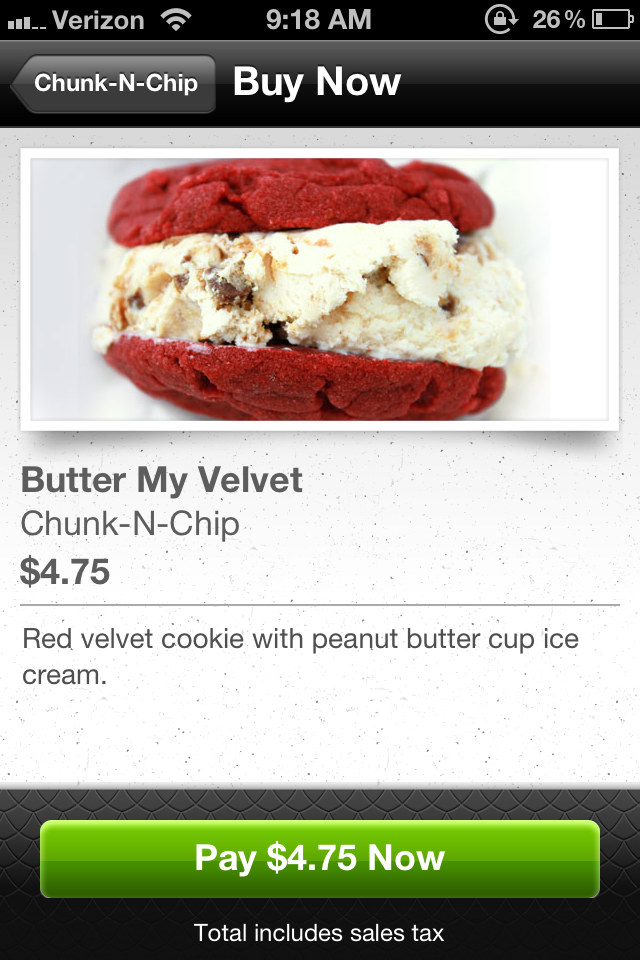 Anyway. Where was I? Oh, right. Skipping lines. PayDragon users can find the item that they'd like to order, push a single button, and have that order placed at the restaurant and started. One tap, and you're ready to go. (Well, two, if you're selecting an item.) This simplicity is one of the key focuses of the service, as Chan wanted the experience to be as smooth and as fast as possible.

Let's say that I'm craving a hamburger from my favorite, fictional burger joint. With PayDragon I can look up from my computer, realize that the Oreos-and-Coke diet hasn't provided all of the nutrients that I need for the day, and place an order for a burger with just two taps. By the time I actually find some pants (I work from home, I may as well enjoy it) and head out the door, my burger could be waiting for me at the burger joint, already paid for. Simple.

This simplicity isn't without its drawbacks, though. By constraining the ordering experience to just one tap, PayDragon has removed the ability to make a special order. In the above example, that would mean that I couldn't tell the burger joint to hold the mustard, no matter how much I loathe that brackish, yellow paste.

So, would I use PayDragon? Absolutely. I actually asked Chan about this specifically, as so many of the cool services that I would like to try are constrained to the West Coast. PayDragon is actually available in New York City, and Chan says that the company has a complete "global domination" plan in store.

The next time you're standing in line hoping to get a hot dog and you see someone skip to the front of the queue and grab their order without standing for so much as a moment, remember PayDragon. The application is gorgeous, and nobody likes waiting in line.