It Turns Out Hollywood Has Always Been Stupid

Tony Hsieh should run a cult. Have you been to the Zappos headquarters tour? There's no way people just happen to be that happy. And now he's convincing all the most important people in my life to move to Vegas.

It's bad enough that he roped Paul Carr into his outrageous $350 million Sim City in Sin City adventure. But they have stolen my husband from me too. He just started as the director of photography for the Downtown Project.

That leaves us with two unassailable facts:

And now I have to do it with the knowledge that there was almost a life-size, full-scale Starship Enterprise constructed downtown.

This thing was amazing. It was going to be the eighth wonder of the world, comparable in size to the Empire State Building and absolutely built to scale, with all the rooms and features of the Enterprise from the show. This thing could have withstood the most hardcore Trekkie cross-examination. 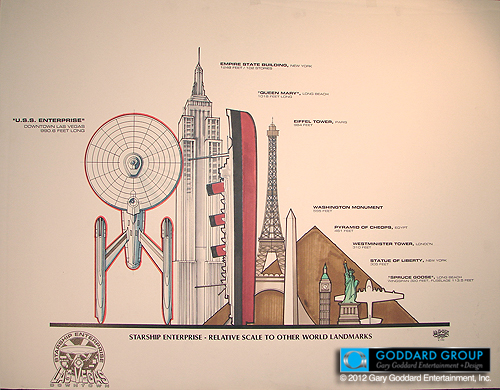 And it got scuttled by one shortsighted Hollywood executive: Stanley Jaffe, then CEO of Paramount Pictures.

The Goddard Group Blog has the amazing tale, and it makes great Friday morning reading for anyone who has ever tried to do something ridiculously, outrageously awesome, almost pulled it off, and then had one bonehead stand in the way. Plus there are amazing renderings of what this thing would have looked like.

Here's the climax of the tale:

To be clear, EVERYONE loved the project up to this point -- the entire Vegas downtown redevelopment committee loved the concept, the Mayor loved it, the Paramount Studios Vice President of Licensing and the entire licensing department loved it, as did Sherry Lansing.  Everyone loved it -- but now it was up to one man.  Stanley Jaffe.

And I will never forget this meeting.

All of our work, the effort to get Paramount, the Mayor, and redevelopment committee aligned, everything had come to this moment. We were ready to go. Money in place, land provided by the city, license for the property negotiated with Paramount licensing -- all set. If Mr. Jaffe says “yes” and we are a “go” project. And the city wanted to have a press conference within a week announcing the project.

So with everyone in the room, I take Mr. Jaffe through the project. With the art, the plans, the overall concept. After my spirited “pitch” everyone was beaming -- everyone except Mr. Jaffe.  Mr. Jaffe thanked us for the effort, and he congratulated us on creating a bold concept and presentation, and then went into a speech that went something like this:

“You know, this is a major project.  You’re going to put a full-scale ENTERPRISE up in the heart of Las Vegas.  And on one hand that sounds exciting.  But on another hand, it might not be a great idea for us -- for Paramount.”

Everyone in the room was stunned, most of all, me, because I could see where this was going.  “In the movie business, when we produce a big movie and it’s a flop -- we take some bad press for a few weeks or a few months, but then it goes away.  The next movie comes out and everyone forgets.  But THIS -- this is different. If this doesn’t work -- if this is not a success -- it’s there, forever….”  I remember thinking to myself “oh my god, this guy does NOT get it….” And he said, “I don’t want to be the guy that approved this and then it’s a flop and sitting out there in Vegas forever.”

And with that, Mr. Jaffe in a single moment, destroyed about five months of work by a host of people, and killed one of the greatest ideas of all time.

Albert Einstein said it best: “Great spirits have always encountered violent opposition from mediocre minds.” So Vegas went with that big TV on top of the Fremont Street Experience instead. Thanks a lot, Jaffe. I could have been writing blog posts from the Bridge. I hate you.

It struck me that this is the same Hollywood streak the Valley loves to hate. Rather than risk something amazing, let's opt for the blind adherence to the status quo. The Valley is about defying the laws of gravity. "What if we did this?" Hollywood is about forcing us to adhere to them. "Nope, this might flop, and we don't want to be embarrassed."

[Tony Hsieh is an investor in PandoDaily.]