Very Cool: 'Get It Now' Allows SFers To Have Any Product Delivered In Less Than an Hour

I've waxed lyrical before about Postmates: the San Francisco-based service which aims to do for couriers what Uber did for cabs.

Their app is slick, their service reliable, and their pricing reasonable. The only catch is that I could never really find an excuse to use it. How often did I need to ship packages around San Francisco? Not often. Today, however, the company has launched what I suspect might turn out to be their killer app: Get It Now.

In a nut, the app allows you to choose any product available in any local retail store and have it hand-delivered by one of Postmates' network of couriers in less than an hour, anywhere in the city. Forgotten your iPhone charger? Postmates will send a courier to buy you one and deliver it to a coffee shop. At a hotel and need contact lens solution and a pizza? Done and done.

I first saw a pre-beta version of the app a few weeks ago in San Francisco, when I caught up with founder Bastian Lehmann for coffee in San Francisco. "I have something quite cool to show you," said Lehmann, with his characteristic Teutonic understatement.

Loading the app, users are invited to choose a store and an item. The stores are pulled from a database, but the shopping list is just free text, so you can request anything from a complicated pizza order to a specific t-shirt or a lamp or a sharpie or -- well -- anything else up to $50 in value. For reasons too dull to relate, we decided it would be fun to have an American Apparel t-shirt delivered to our table at the Creamery. 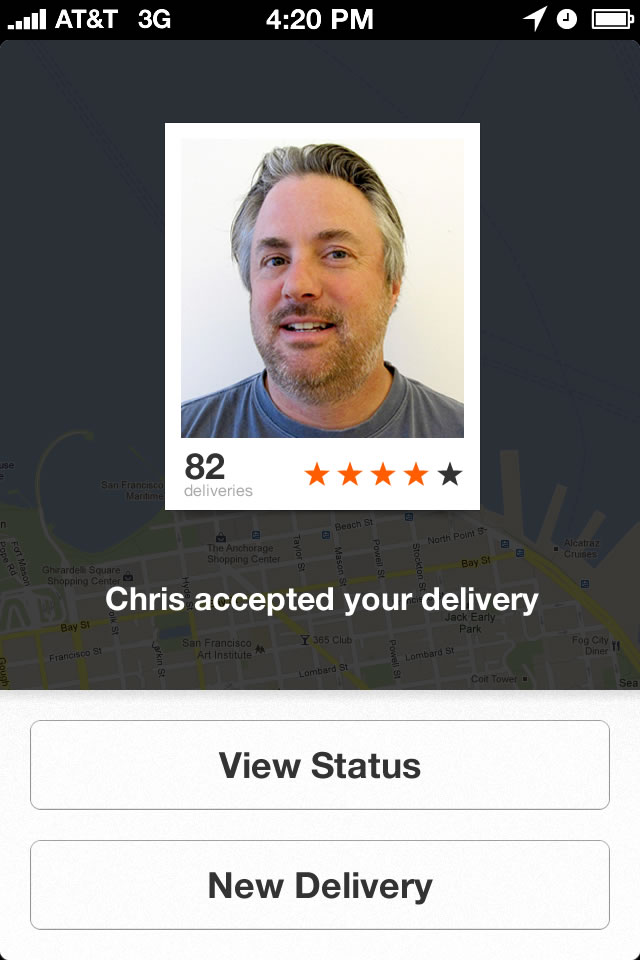 Another click pushed the request out to Postmates' network, where it was assigned a courier. After that the service works just like Postmates: The courier's position is shown on a map, and the user is notified of the various stages of delivery, when the courier arrives at the store, when they have located and purchased the item, and finally when it's on its way. Twenty minutes later, our courier arrived clutching a bag containing the requested tshirt. The last step is to sign for the delivery: again done through the app.

Postmates charges a delivery fee between $4.99 -- $15 (averaging at $7.99) plus a percentage (currently 5%) of the cost of the item. Obviously you have to pay for your purchases too, but everything is billed in a single payment by Postmates through the app. It's so ridiculously straightforward a process that one could easily end up sitting all day, having stuff brought to coffee shops by people on bikes and in little vans.

During the pre-beta period, Get It Now processed almost 300 orders, worth a little under $5,000, and Lehmann is confident that the service will scale decently, now it's available to regular folks. But not too confident: Right now users have to apply to use the service here. But, says Lehmann, "We will let people in super fast, and every user can invite five friends."

Right now Postmates' Get It Now is only available in San Francisco, but I'm lobbying hard for it to come to Vegas soon.