Plug.dj Open To International Users, Does What Turntable.fm Can't

Turntable.fm is pretty great as far as novel ideas go, but it also has a huge problem: It is only available in the United States. What about all of the billions of other people around the world who want to jam to some music with friends? Are we going to leave them in the dark with their lonely music playing ways, or will they be allowed to come out into the light of the virtual concert?

Well, Plug.dj is taking the Turntable.fm model and turning it on its head, by going fully international and going beyond music.

How, you may ask, is a service that few people have heard about able to secure international licenses for nearly every country in the world, while Turntable.fm, a service that has preexisting relationships with the major music labels, isn't able to do the same? Well, the answer is that Plug.dj doesn't have any licensing agreements, and it doesn't look like it will ever need to have any. (To be fair, they are open to licensing agreements, they just don't need them.)

Plug.dj operates similarly to Turntable.fm in that you enter a virtual music room, there's a DJ avatar at the front, and everyone in the room is represented virtually by their own avatar, each with a custom dance when the user likes what is being played. Plug.dj then diverts from the established path, and allows users to connect with YouTube and SoundCloud and provide the ability to play music by playing YouTube videos, as opposed to a preset catalog of licensed songs. 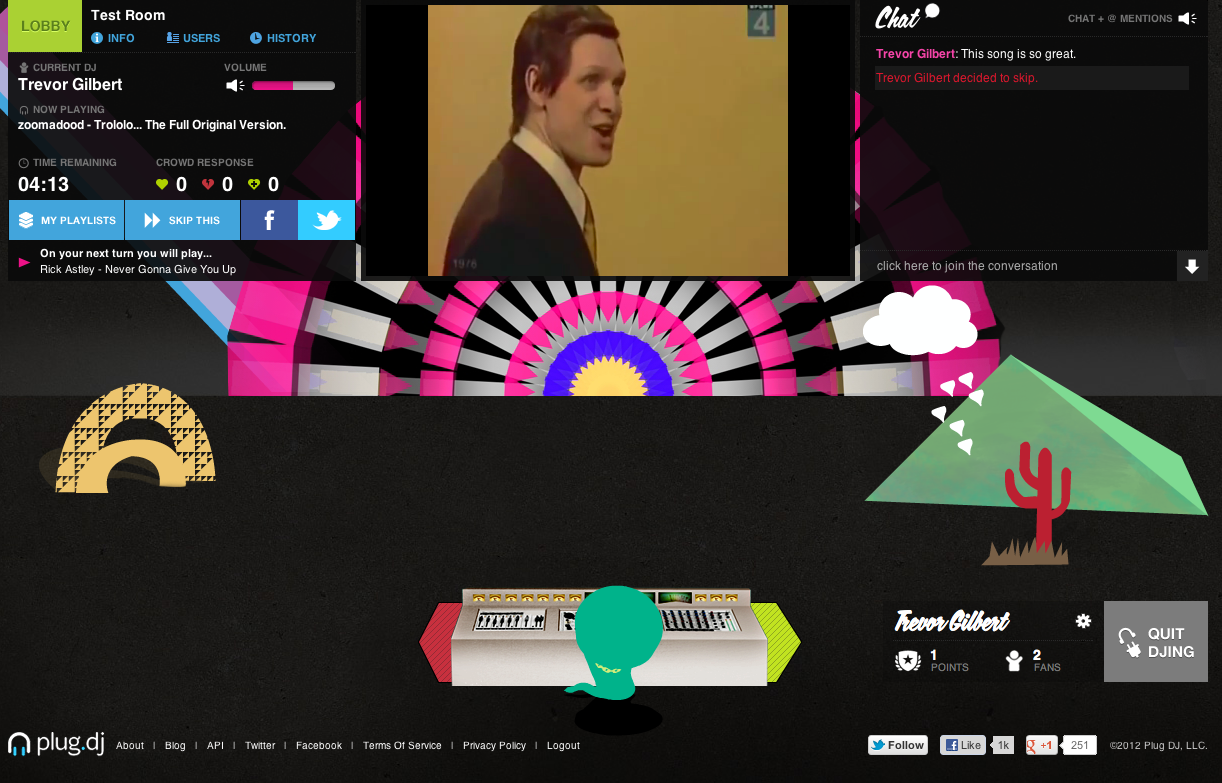 The fact that the service offloads the music and videos to other companies means that it doesn't have to worry about licenses with labels or with content providers. As long as it stays within the current Terms of Service of YouTube, it is on safe ground. As of the writing of this post, the company is entirely legal and has been provided with encouragement behind the scenes by some of the biggest labels.

Not only does it allow the service to operate without deals with labels, but it also opens up the business to virtual rooms that have nothing to do with music. Rooms that could be a series of memes, with people chatting about the service in real time. However, the real benefit is that the service can operate internationally, immediately.

The company is using its understanding of music and the international market going full steam ahead into the fray. Founders Steven Sacks, of Jamcloud, and Nick Joyce, are taking what they've learned of the music industry (Steven is a former DJ), and the international licensing mess (Jamcloud was especially popular in Japan), and meshing that with a preexisting model of content sharing. This provides new benefits to users.

This specific benefit is what I like to called a PBD (Pretty Big Deal), and after using Plug.dj for most of today, it appears the Plug.dj has executed upon the potential perfectly. The company is definitely competing with Turntable, but more importantly, it is competing with Turntable in a way that Turntable can't fight back on. By going the international route, it is skipping the most obvious market, and instead is going to the most underserved market.

There are two ways that the service is looking to conquer the international market. The first is by offloading the content to YouTube and SoundCloud, which means that all videos are available around the world, so long as there is a localized version of the song available in that country, via YouTube. The second is that the service provides a realtime chat box for people to connect in the room, which translates everything in the local users' language automatically and in realtime, thanks to Google's Translate API.

The real question is, though, will this be popular around the world? So far the answer is yes. The company shared some statistics with PandoDaily, and it does appear that people want this service badly.

The company has seen 250,000 videos played, with 2.5 million votes shared on videos in the virtual rooms. On top of this, the company has added a cumulative 4 million views to YouTube and SoundCloud, meaning that the two providers are making a nice amount of money on the side from Plug.dj. By far the most impressive stat, is that the average on-site visit time is 44 minutes.

The company does appear to have a handle on its growth, but an important test for the company will be whether or not it can scale for the entire world and at the same time find favor with the labels. While it will be nice to someday have millions of users, eventually for the company to make money, it is going to need to establish good relationships with all of the major labels worldwide. Something that you can't do when the labels aren't making money off of your site, which is true of the current iteration. That being said, it isn't an impossible obstacle to overcome, just one that the company's founders will have to look out for.

Of course, while the service is absolutely useful for international users and lovers of music and videos, there is also the startup side of things. This includes the fact that the company is currently unfunded, and is continually adding features like branded rooms for monetization, promoted DJ's, sponsorships, and specialized rooms for companies like Columbia Records. At this pace of improvement, the company could theoretically continue on for quite a while without raising funding, but as Steven Sacks told PandoDaily, in order to really accelerate growth internationally, it will eventually want to raise a round of funding.

All of this being said, the launch of this service in February marked the start of what I personally hope will become a big trend in business: not ignoring the rest of the world. When I lived overseas for a long period of time, the number one complaint I had about technology was that I was restricted by ridiculous licenses as to what I could and couldn't see. Plug.dj goes a long way towards fixing that problem, and hopefully it will be the first in a long line of startups to start solving the international barrier problem.