Nine years after disrupting the market for legacy on-site phone systems with its first cloud-based offering, and with IPO rumors currently swirling, RingCentral is about to pull a new rabbit out of its product hat. The company is at the DEMO conference today announcing a new Cloud-Touch platform, which allows businesses to setup, manage, and use their phone systems from smart mobile devices.

This means that the modern road-warrior who spends equal parts of his day in the corporate office, his car, and his home office can manage call-handling settings, access voicemail, and add or remove users, regardless of location and on any device.

With remote working arrangements and the consumerization of IT increasingly common, this flexibility and simplicity is going to be a benefit to companies. The fact that they can also avoid dropping hundreds of thousands of dollars annually on enterprise IT consultants shouldn’t hurt either.

Naveen Gupta, the company’s Chief Product Officer, told me that this is “the first phone system that allows businesses to turn the beach into a fully functioning office and telecom IT desk.”

Cliché as that may sound, RingCentral is hardly an upstart selling empty promises. It has raised more than $55 million, as of its October 2011 Series D from the likes of Scale Venture Partners, Sequoia Capital, Khosla Ventures, Cisco, DAG Ventures, and Silicon Valley Bank. Its 200,000 plus customers in the US and Canada range from small businesses that want to appear larger and more professional, to a certain consumer Internet company whose brand invokes the sound birds make.

Another new feature being rolled out today is Cloud-Presence, which allows employees to see whether their colleagues are on the phone, regardless of device or location. These newly released mobile management features are in addition to its existing toolkit. 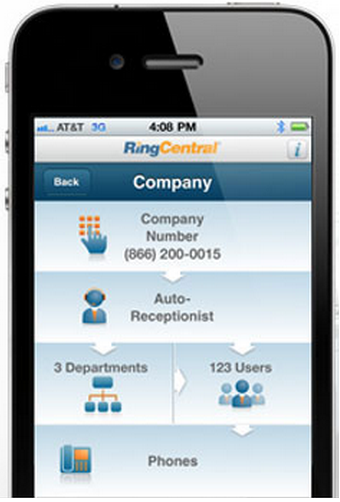 Earlier this year, the RingCentral announced integration with Dropbox, Box, and Google Docs to offer Cloud-Connect, an integrated fax service.

Shocking and off-putting as it may be to learn that faxes are still a part of the 21st-century business world, the ability to keep as far away as possible from the archaic machines themselves is extremely welcome.

I spoke to Gigwalk, one of the RingCentral customers beta-testing the new platform, to ask about its initial impressions. Sam McGue, the company's office manager said, “Cloud-Touch delivered as promised and dramatically simplified our business.”

This is actually McGue’s second experience with RingCentral, having used an earlier edition at her previous company and subsequently recommending it to Gigwalk immediately upon her arrival.

Gigwalk is a small company with a predominantly mobile workforce that changes in size regularly, so McGue went on to say that “it has been a big relief to have the simpler setup process and the improved mobile controls.” She also raved about the ability to integrate employees' personal mobile devices.

Either McGue is on the take, or she’s hooked on the RingCentral Kool-Aid. But if her experience carries over even partially to the rest of the customer base, then there are good things ahead for the company.

RingCentral’s growing customer list and impressive new feature set say they’re doing a pretty good job at their stated mission of “tearing down the barriers of accessibility, usability and costs – leveling the playing field for every business of any size with a simple, all-inclusive cloud business phone system.”

As the traditional 9-to-5 on-site working arrangement becomes a thing of the past, it seems the demand for these virtualization solutions can only grow. Looking ahead with early investors eager for a payday after nine years, expect the IPO buzz around RingCentral to intensify.