The web is awash with Kickstarter success stories. I mean, just look at the success of the TikTok! or Double Fine! or the Pebble! To the casual observer, it may well seem like Kickstarter is something of an Entrepreneur's Eden, where every last person with a big idea and a heart full of hope can walk away with a mountain of money.

The reality, of course, isn't always quite so cheery. For every project that meets its goal, a handful fall flat. Likewise, for every project that pulls in a cash pile far grander than its founders ever hoped to see, others miss their goal (and thus get none of the pledged money) by no more than a pittance.

So, lets say you've stumbled across $100 bucks sittin' in a sock drawer. Your bills are paid, your family is fed…so why not use that money to help someone else? Yeah, you could drop it into a charity and call it a day — but lets say you want to get a bit more creative with your philanthropy this time around.

So you pop over to Kicksaver. You tell it that you've got $100 bucks to burn.

Bam! You've got a big list of dreams that could come true if only someone would cough up less than a Franklin. Right now, that list includes helping a class of kids in New Hampshire build a wind turbine, getting a chiptune band through the last leg of their tour, and filming a promo video for one aspiring film maker's fantasy flick. Each of these projects has less than a week's worth of time left on the clock, but loses all of the change they've raised so far if they can't pull in that last 100 bucks. 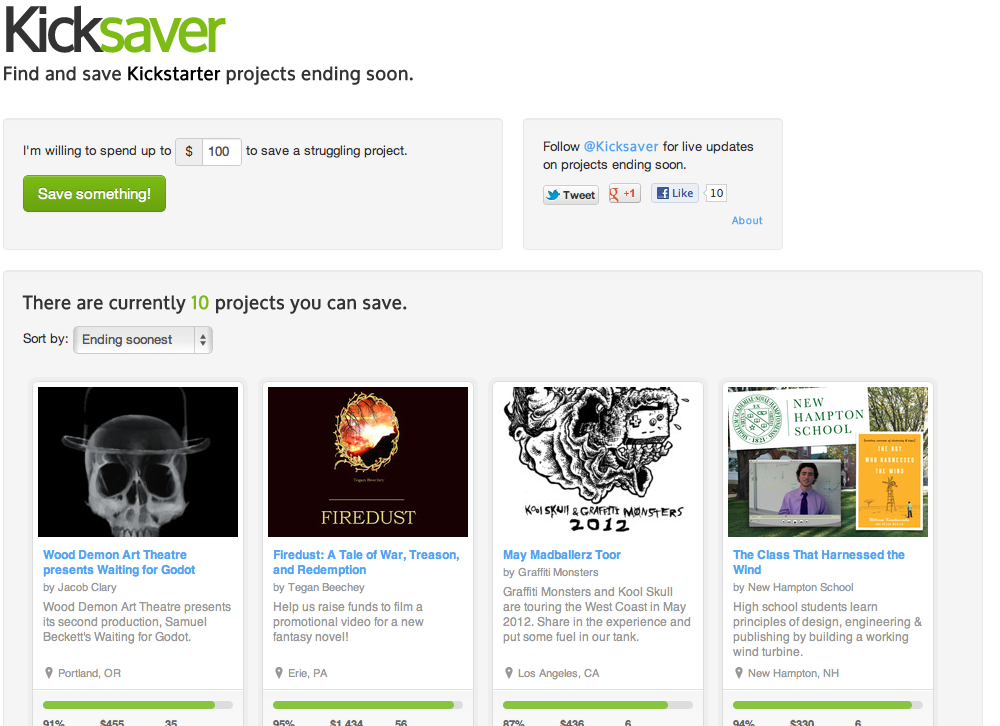 Does the concept have its flaws? Sure. You really should be investing in Kickstarter projects because they truly interest you, not because they just happen to need the amount of money you have to spare. But if this works out to a few more projects getting a few more eyeballs and thus finding the last few contributors they need, it's nothin' but a good thing.