I'm sure someone somewhere has had a worse first week on a job than Warren Adelman. But I am struggling to think of an example.

After nine years as the yin to the outlandish Bob "I kill elephants and ogle Danica Patrick" Parsons' yang, Adelman had just taken over the CEO job at bad boy domain registrar Go Daddy. Six months earlier, the company had just completed a $2.25 billion private equity deal with SilverLake, KKR and Technology Crossover Ventures. The goal was to take this still private Web 1.0 survivor with more than $1 billion in annual revenues -- possibly the only company in the world that fits that description -- and turn it into a modern cloud computing company with $2 billion in annual revenues.

Parsons' time as the CEO had come to an end for many reasons, and Adelman would be the more sane and sober head of the company going forward. His toughest challenge: Selling a souped up suite of cloud computing services that the company hoped could compete with RackSpace and Amazon Web Services. For that to work, this Arizona-based company that gets more high-fives at a Nascar race than at a tech conference would need to win the hearts and minds of techies who have the greatest server needs.

On December 16, the news was announced. He left the next day on a long planned skiing vacation with his kids. And then, Go Daddy became the most vilified company in the tech world.

It came out that Go Daddy was supporting the much-hated Stop Online Piracy Act or SOPA -- the four letter acronym that was lighting up tech blogs, Tweets, and nearly every conversation in the Valley in late December. The whole tech world turned on Go Daddy -- lead by the normally jovial Ben Huh of Cheezburger Network. Huh threatened to move all 1,000 of his company's Web domains off GoDaddy if it didn't reverse its stance and demanded the rest of the tech world do the same.

Adelman was completely blindsided by the whole thing. It was a glaring example of the silos that existed within his company. There'd been no discussion he was aware of concerning SOPA. Someone had seemingly just made a unilateral decision for the company to support it. And now his most important target demographic-- the one he needed to achieve the vision he'd just sold to two of the world's largest private equity firms-- hated him. I mean, we really hated him.

His teenage son was watching the scandal blow up on Reddit on his iPhone from the slopes.

"Dad! Look at this!" he'd say, showing him the latest article in morbid fascination.

"I GET IT," Adelman would sigh back exasperated. "Really? This is how I start out," was all he could think.

Adelman says he acted as quickly as he possibly could. The crest of the online boycott was on the 23rd, and on the 24th Adelman reversed his decision. He put measures into place so that nothing like this ever -- ever -- happened again at the company. He made sure GoDaddy came out against PIPA and any other subsequent versions of the act. And, in the most important sign of his character, he assumed responsibility and didn't throw any individuals under the bus for the move.

"These things don't happen in a vacuum," Adelman says. "It was a huge wakeup call. That adage that all press is good press, as long as they spell your name right? Turns out that's actually not correct."

And months later, he's still repairing the reputational damage. I met up with Adelman 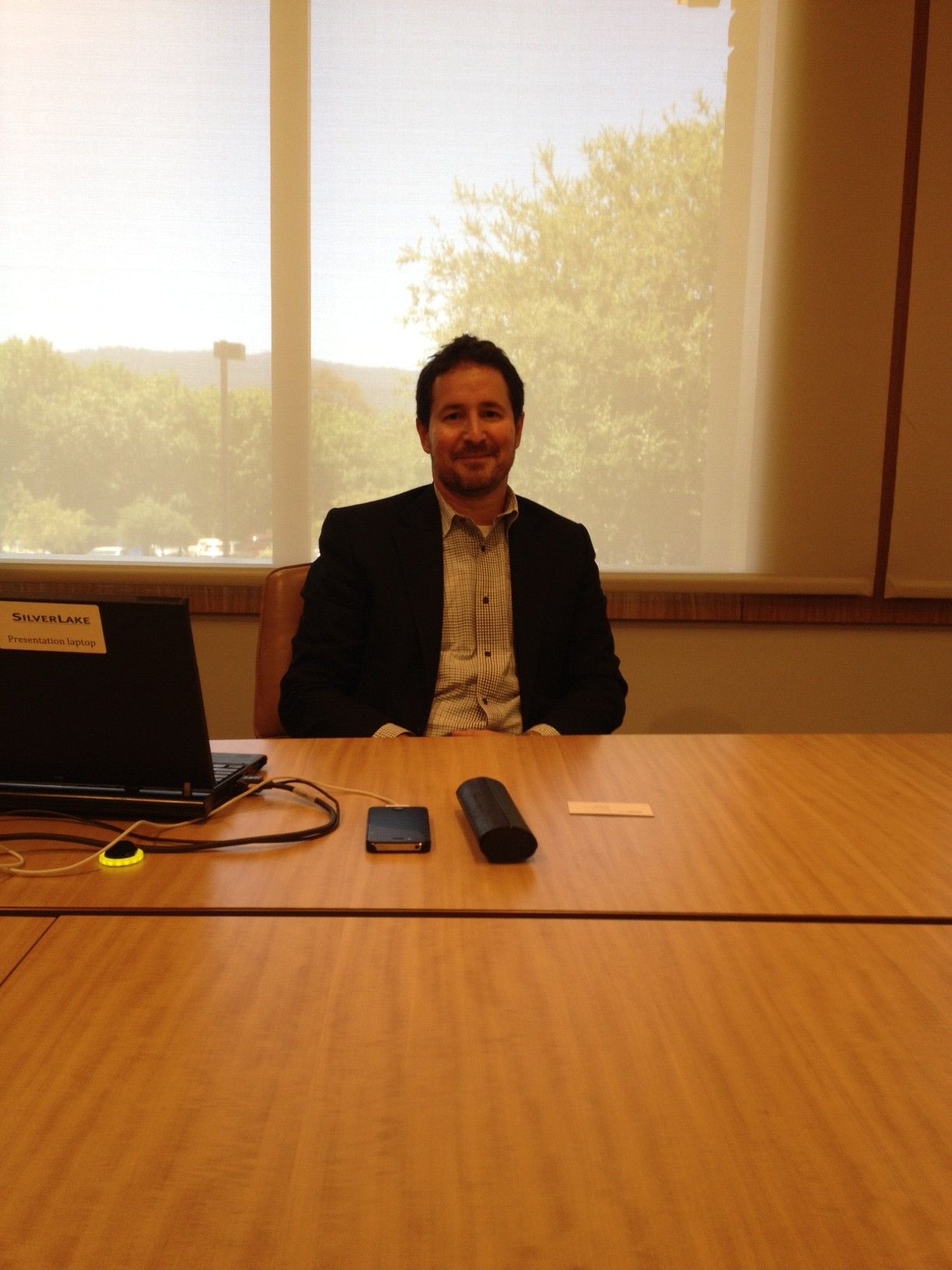 yesterday at SilverLake's offices on one of many trips to the Valley, to meet people and generate good will. (This is him sitting across the world's largest conference room table. Said Tony Ping of SilverLake, "We bought it in 1999.") Even on first glance, he just couldn't be more different than Parsons. He had been the yin to Parsons' yang for many years, and has plenty of great stories that illustrate it.

There was the time when a VC came to meet with Go Daddy in the 1990s, and she began by telling them the company had to change its name. Immediately Adelman thought through all of the headaches that would cause -- changing all the search keywords, the SEO implications, the analytics. Parsons' reaction was slightly less cerebral: "Get out," he said, stonefaced.

Another time, someone came in to pitch the two on naming a stadium after Go Daddy. The deal was $30 million for five years. All Adelman could think of was the long track record of companies who bought naming rights and then went out of business. (*Cough, cough* Enron Field.) Parsons countered, "How about $5 million for thirty years?" (And then likely told that guy to get out too.) "There was a lot of entertainment value over the years," Adelman says.

Adelman knows Go Daddy needs to change its image. But he's inherited a tricky catch-22 that could go very wrong.

He's aware that one of the reasons the tech world didn't give Go Daddy much benefit of the doubt when it came to SOPA was that the company hasn't exactly come across as ethically pure in the past. There were those Super Bowl commercials -- half naked women, allusions to shower scenes, and plenty of cleavage with the thumping "GO DADDY!" song pulsating in the background. Less helpful was Parsons posting a gruesome video of himself shooting an elephant in Africa on Twitter.

It was another moment when Adelman was caught off guard.

"Really?" he said to Parsons when they talked amid the aftermath.

"But I fed a whole village," Parsons said, clearly not getting it.

"The only thing worse you could have done was go to Japan and participate in the dolphin slaughters," Adelman said.

Later when he described the true Go Daddy culture to me as very hardworking and "disarming," Tony Ling of SilverLake pointed out the unfortunate pun and suggested he start using another adjective.

"Unfortunately, one bullet can wipe away tons of good work," Adelman says. "But these are my crosses. I need to explain that that's not really the company. That was his personal mistake. We have 3,500 people who make up this company and work hard every day to take care of thousands of small businesses. I'm on a journey where I'll have to prove I'm not that guy, for better or for worse. I'm Canadian. We're the least offensive people in the world!"

But here's the rub that Adelman is well aware of: Being run by that guy was incredibly effective for Go Daddy too. It has 53 million domain names registered and answers 10 billion DNS queries per day. It does more than $1.1 billion in annual revenues almost entirely by organic growth. In its entire history, the company has only acquired two tiny companies for less than $500,000 total. There are far more Web searches with of the words "Go Daddy" than "domain registrar," spiking at each Super Bowl.

Those ads unquestionably worked. They ran the first one in 2004, with no idea if it'd be brilliant or a colossal waste of money. But the company was paying for it out of cash flow, not venture capital, so why not? Go Daddy had 16 percent marketshare at that point, and the week after the ad, it jumped to 25 percent -- and stayed there until the next year. The next Super Bowl ad got it to 28 percent share and the next one got it to 32 percent share. Even when one of the racy ads was preempted by the station, the numbers just kept growing.

The key for Go Daddy's future growth may be one of the smartest things the outlandish Parsons ever did: He insisted on pricy US call centers at a time when nearly everyone was outsourcing. This was one of the biggest reasons Go Daddy didn't go public after filing its S1 in 2006. Bankers kept insisting this was a cost the company couldn't afford, and Parsons told them to shove their IPO. (It didn't help that the market wasn't in great shape, and the company was told it likely wouldn't get the valuation it was seeking.)

Fast forward to today, when companies like Zappos have proven what an asset top customer service can be. Go Daddy has 10 million customers and had 12.7 million conversations with them last year. That's more than one with every customer. That would be the equivalent to the largest tech blogs having a conversation with each and every unique visitor, almost impossible to imagine.

According to the company's own surveys, 83 percent say their issues were resolved during those calls, and largely as a result 92 percent say they would refer friends and family to Go Daddy. Not only that, its call center has generated some $250 million in revenues from upselling customers who initially call with a problem.

This call center effectively serves as the outsourced IT department for millions of small businesses who migrate up the product stack from registering a domain name to hosting their site, with many paying Go Daddy even more money to use other products for promotion and marketing, ecommerce shopping carts, and more.

The company sees international growth as a massive opportunity. Before the private equity deal 20 percent of its business was international, even though it was only accepting dollars and only had English language sites. It's now expanding its call center model, finally opening Indian call centers. Only, in true Go Daddy style, their sole job is serving Indian customers. Ditto in Latin America.

There are 6.8 billion people in the world, and only 225 million registered domain names, Adelman says. Even in the US some 40 percent of small and medium sized businesses do not have websites. "We are just scratching the surface," he says.

Going forward, Adelman wants Go Daddy to be more about that and less about cleavage, as good as that cleavage has been for word-of-mouth. He hints that those Super Bowl ads will have a different flavor this year. When he pointed out that only 60 percent of their customers were men, I expressed surprise based on the marketing. "Just wait," he said with an eyebrow raise.

"Are we getting half-naked men this time?" I asked.

All he'll tell me about the new direction is that there is "new creative," and "we are going to make some changes." Expect more evolution than revolution. Still, it'll be a different Go Daddy advertising in the Olympics and the Super Bowl this year.

It remains to be seen whether this non-offensive Canadian is just too boring, whether his Go Daddy will be all yin and no yang, or whether this is one of those companies where all the good and all the bad is wrapped up in a polarizing founder and when that founder is gone, so is that weird magic. Go Daddy may be abandoning the racy horse that brought them to $1 billion.

But this much is clear: If Go Daddy wants to woo the tech world back, a strong break from the past is a prerequisite.