AnchorFree, maker of the world’s most popular consumer virtual private network (VPN), has closed its Series C financing to the tune of $52 million, led by Goldman Sachs.

The company’s flagship application Hotspot Shield has been widely popular with more than 60 million total downloads resulting in over 100 million user sessions and two billion monthly page views monthly. Quantcast reports AnchorFree’s website as the 51st most-trafficked on the Web.

AnchorFree has built a profitable business and looks to use the new infusion of capital to scale operations with the stated goal of reaching as many of the world's 1.6 billion Internet users as possible.

The VPN product is designed to make public browsing worry-free by automatically detecting unsecured Wi-Fi networks, warning users when they’re at risk, and automatically activate Hotspot Shield in these cases.

The service then provides a temporary IP address and encrypts each user’s entire Web session, turning all HTTP sites into HTTP(S). This is a welcome service, freeing users from relying on individual websites or network hosts to ensure their security.

Additionally, when users attempt to access domains containing one of the 3.5 million malware threats recognized by its system, Hotspot Shield provides an alert and allows users to safely view a snapshot of the page they're trying to access.

As the Mac Flashback trojan and increases in Android malware have demonstrated recently, no computing platform is safe from would be intruders. AnchorFree describes the situation saying, “While anti-virus providers secure the device of the user, Hotspot Shield secures the entire Web by protecting the user’s identity from theft and third-party tracking, encrypting browsing, and preventing malware and phishing.”

The product has become especially popular in countries with heavy censorship and should appeal equally to first-world users who frequent public hotspots or regularly travel internationally.

Hotspot Shield offers an ad-supported version to users of Windows and Mac, as well as a paid premium service that offers additional malware protection and faster browsing. 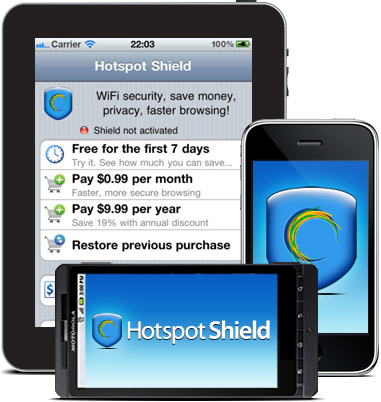 The company's iOS app was released in November and has since been downloaded one million times. While the download and the first seven days of service are free (adding shades of grey to the preceding statistic), continued usage requires a subscription.

Although the company has not given a definite timeline, sources with direct knowledge of the situation report that it will be coming to Android very soon.

On the mobile app side, Hotspot Shield goes beyond security to provide data compression. Users can choose between low, medium, or high compression, which primarily affects image quality. The company claims that it can reduce data usage by up to half, while also speeding up browsing.