LinkedIn's suite of recruitment products are a big success: Revenue increased 136% in the last year, and the company is now on track to beat out industry stalwart Monster.com. It is, apparently, "the place" to "be found" by employers.

The problem is, LinkedIn is kinda lame.

With 161 million users, one year under its belt as a public company, and a valuation of $10.23 billion, LinkedIn, is, in Internet years, old news. And with a fresh crop of startups angling to disrupt or improve upon its offering, LinkedIn starting to look like an industry stalwart itself.

There is Intro, an ambient location app for professionals. There is Talentbin, which last week launched its social networking-based recruiting tools.

And today, there is WorkFu. Of all of the "LinkedIn, but better" offerings I've seen, this one might be the most useful and enjoyable to use.

Aside from WorkFu's easy-on-the-eyes design, I'm not surprised that this came from a bunch of agency guys. Ad agencies (or creative shops, or whatever they are calling themselves), are in more pain than ever on the hiring front. More pain, even, than startups, if you can believe it.

WorkFu is a product of that pain. I'm fairly certain that if LinkedIn were to start building itself from scratch in 2012, it would look a lot more like WorkFu.

That's because it's designed entirely for one thing: job hunting and recruiting. And compared to the cluttered pages of LinkedIn where removing a connection is a counter-intuitive, multi-step process, WorkFu has a dead simple UX. You create a profile for yourself in a few seconds, which immediately beats LinkedIn's desperate "Add another job and your profile will be 55% complete!" pleas. And even after a just a few seconds of approvals and clicks, my WorkFu profile tells you more about me than my LinkedIn profile does. (You are, after all, hiring a person, not a resume.) 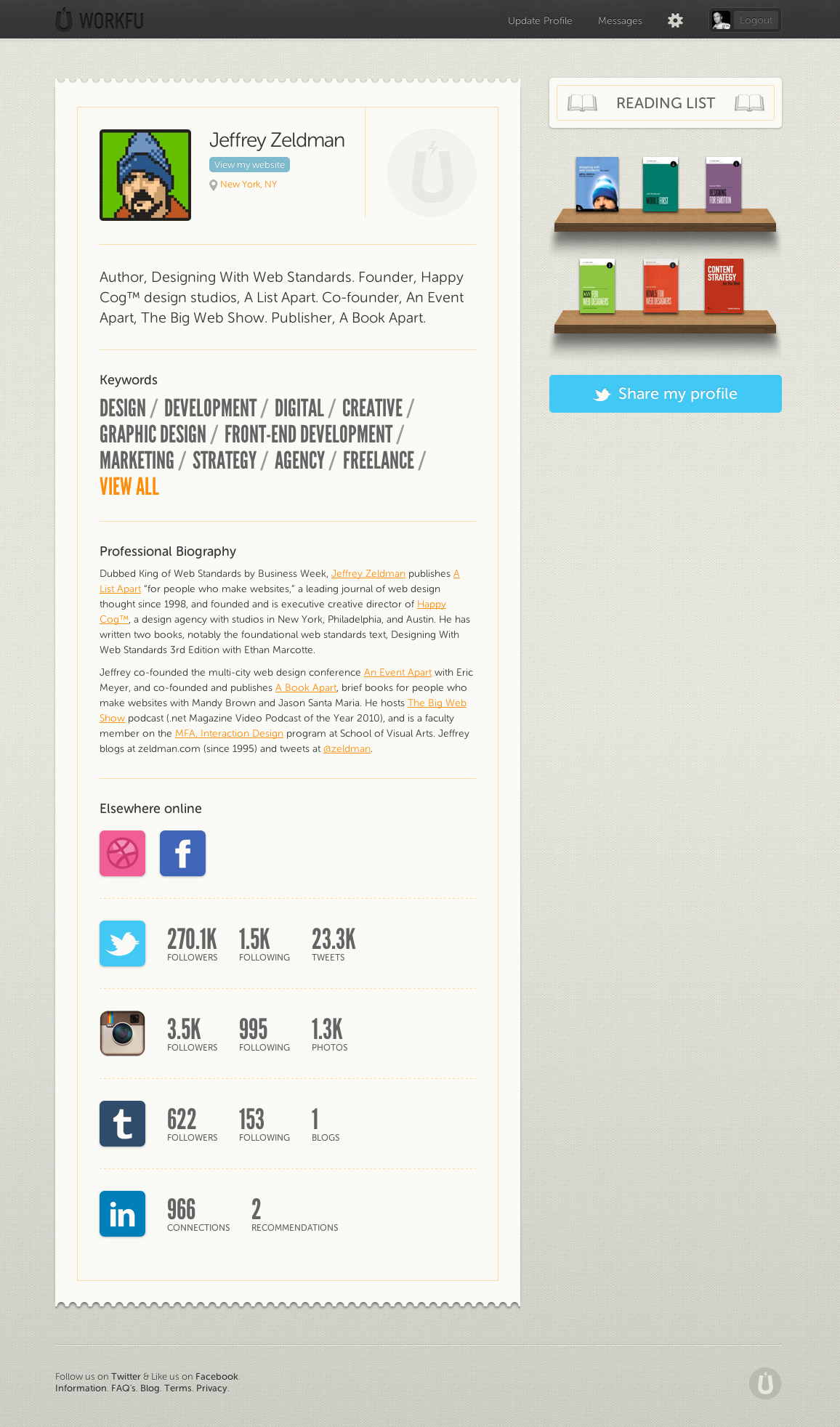 That fuller picture is thanks to a set of keywords WorkFu suggests based on info drawn from my Twitter feed. I chose around 40 that apply to me. (This may get tricky for writers, though, considering I don't create mobile apps but I'm interested in covering them.) It's a basic filtering system for recruiters that makes sense for a generation of workers whose professional lives are increasingly public and multi-dimensional. "The average age of a LinkedIn user is around 36. There is a very different kind of job seeker coming into in the market, looking for various opportunities rather than jobs for life," co-founder Adam Martin says. WorkFu is designed to be a site they want to spend time on.

Further, LinkedIn profiles don't provide a very rich data set for recruiters to mine. "The people you follow and interact with on Twitter say more about you professionally than your friends on Facebook, or even your LinkedIn profile," Martin says. "The data there is richer."

So, using data from Twitter and whichever social networks you choose to pull in (including Github, for you tech recruiters), WorkFu can deliver a reasonable amount of information to recruiters. The recruiters can use that to filter through candidates by interests, topics, connections which combine to form a "Fu Score" that ranks candidates by how strong a match they are.

Talentbin, which I wrote about last week, has a similar social network-based candidate suggestion engine. The difference here is that WorkFu provides the communication layer directly on its own platform. "We're not just scraping the other social networks for data," Martin says, "we're adding the richness of the interaction."

An "Opportunities" tab lists jobs I'm qualified for. On the job page, simple "Apply Now" button sends a message, along with your profile, to the poster. You can track the jobs you've applied to under a "Your Applications" tab, and once a position is filled or an applicant is rejected, recruiters can very simply signal that out to applicants. It's probably the least hideous job application interface I've interacted with. And as always, there is a data play. "We can offer them hugely valuable insights into the skill sets of their company and start to show them which roles and skill sets they should be hiring in the future," Martin says.

For now, WorkFu is basically an automated referral network with a message management system. In the long term, Martin believes it could be an alternative to LinkedIn.

It has a long way to go. I don't love LinkedIn, or even really like it, and I've never gotten a successful or very relevant job opportunity via the network, but my experience (and the litany of derisive anti-LinkedIn tweets I see) don't reflect how valuable the company has become to recruiters. It's so valuable that last year a debate sprung up over whether a company owns an employee's LinkedIn contacts. It's a huge business that's not exactly experiencing a slow in growth.

But empires can rise and fall very, very quickly in social media. If enough startups see an opportunity to do professional networking better than the leading player, there must be some room for improvement. LinkedIn now has a choice: It could squash the competition, acquire it, or lose to it.

The first version of WorkFu is bootstrapped from the savings accounts of its founders, but the London-based company is in conversations with investors for a round of funding. The team will likely adopt a subscription model similar to LinkedIn's recruiter products but is free to use for the time being. 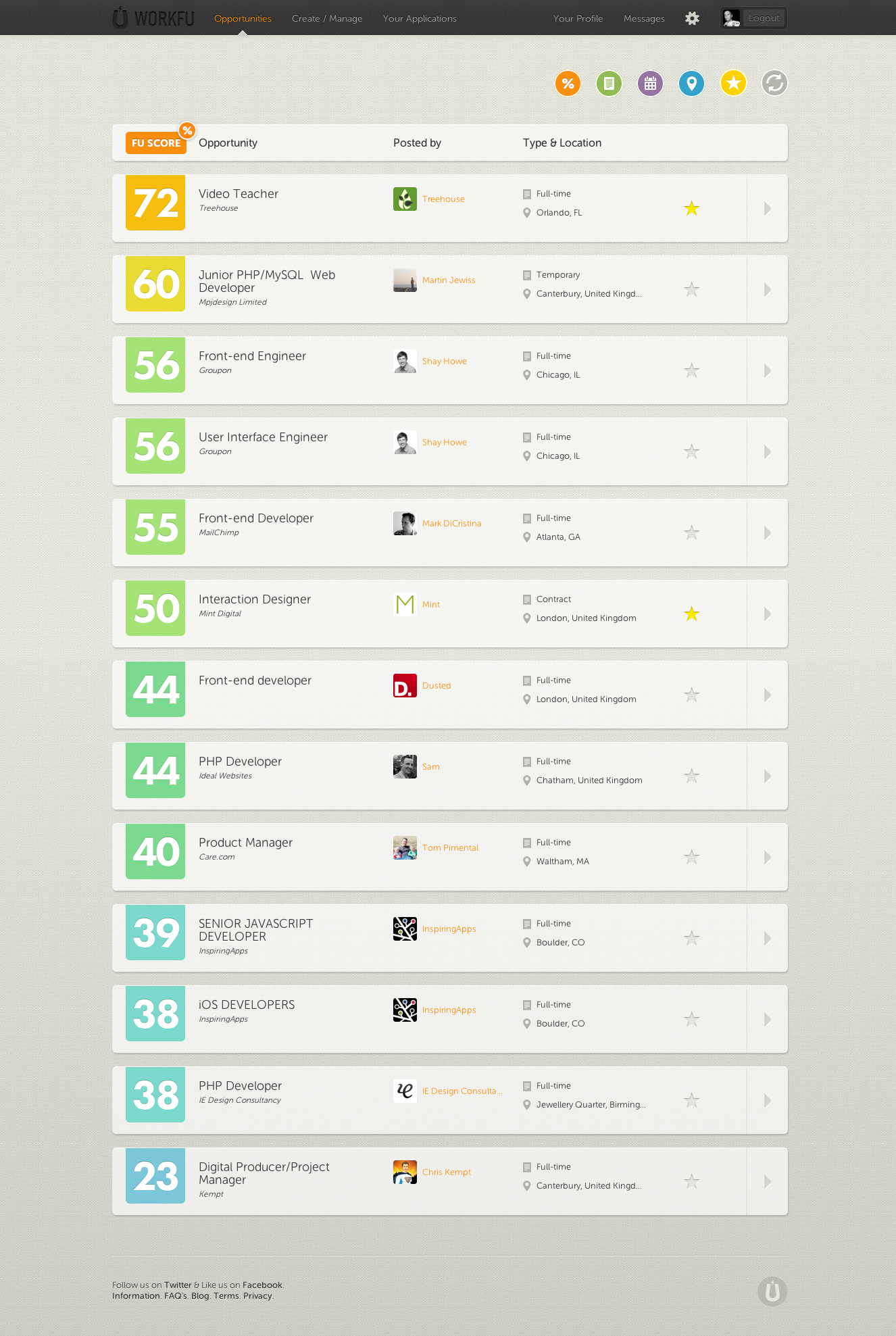 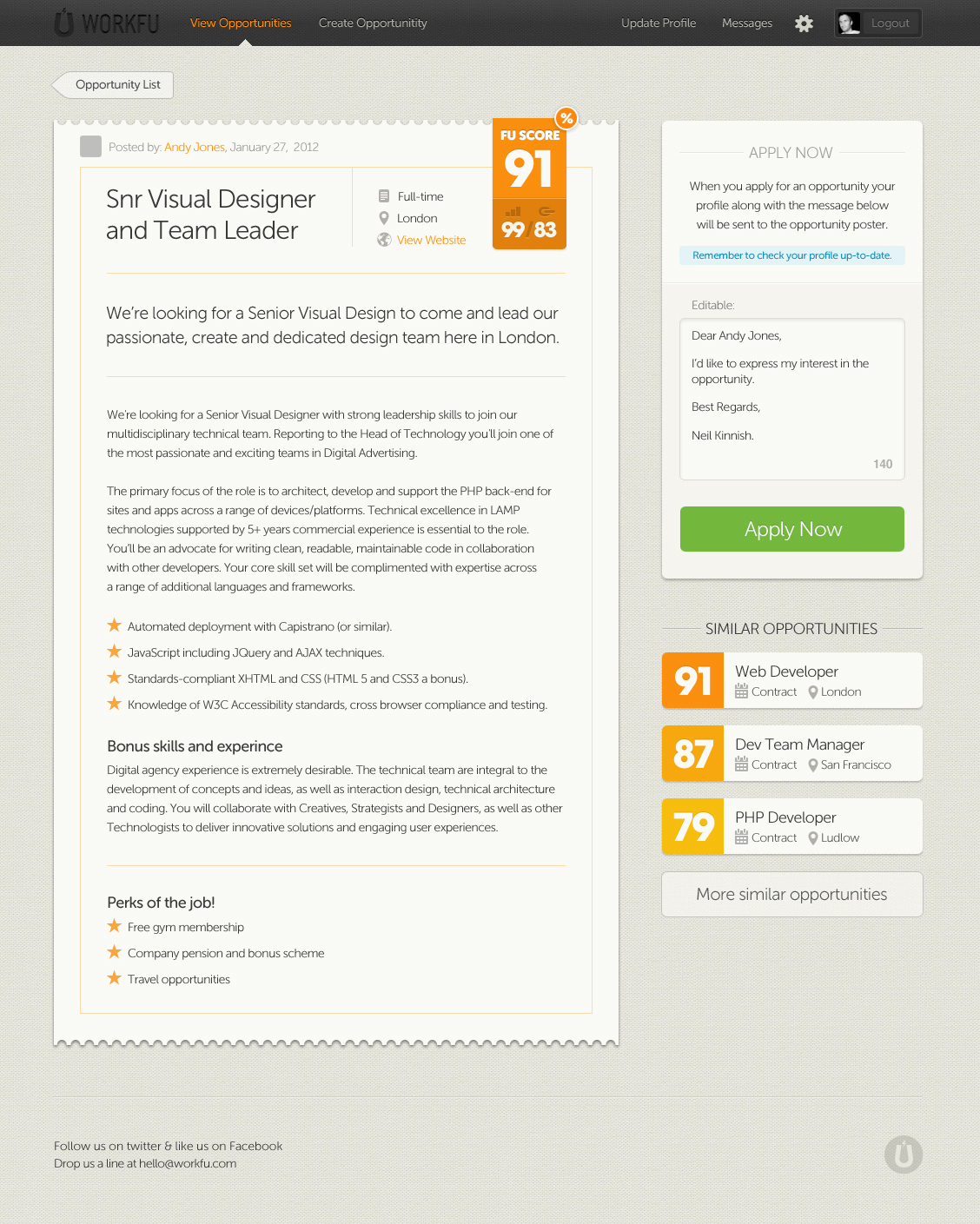