Modern households bear little resemblance to the lives of the iconic matriarchs June Cleaver and Carol Brady, who made it seem effortless to plan and execute homemade meals. Today, families are battling overwork, tighter budgets, and sometimes even the problem of having too many choices.

Seeking to simplify homemaking, the popular recipe and shopping list platform ZipList has launched a Netflix-like queue for meal planning.

The ZipList Meal Planner aims to answer two ever-present questions: What should we make for dinner tonight and, subsequently, what ingredients do we need that we don’t already have in the house?

“Meal planning has been our most-requested feature for years. Until recently, we couldn’t get our heads around how and why people would use it. All the solutions offered previously were designed for the one half of one tenth of the population that is extremely analytical. The reality, however, is that everyone meal-plans, even if they don’t think so. If they didn’t, they’d be shopping before every meal.” 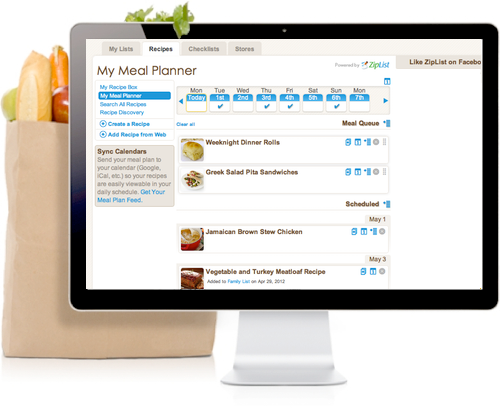 ZipList has long been known for allowing users to save recipes from across the Web and turn them into shopping lists. The company reports that it has helped more than one million users save more than four million recipes to date, with the average user having dozens of recipes saved.

The newly added meal planner allows busy cooks to map out a week’s or month’s worth of meals from those saved in their queue. By simply clicking the "Plan" button, users can add desired meals to the shopping list based on pictures and titles, with no concern for the details.

Meals can be assigned to specific days based on family schedules and required prep times. “A more elaborate recipe can be saved for a Friday night family dinner, while a 5-minute meal might be perfect before Thursday night soccer practice,” says the company. The meal plan can then be integrated into the calendars of all members of the family.

Returning to the Netflix analogy, ZipList believes that people look at meals like they do movies. When they look at a list of recipes, they know that they want to eat certain ones soon, but may not immediately know or care on which day. These recipes can be added to the queue in bulk. Then as each week comes, certain recipes can be added to the shopping list and, if desired, scheduled for exact days.

ZipList's technology powers the recipe platforms of 165 partners such as Martha Stewart, The Daily Meal, and Ming Tsai, and is also installed as a plugin into 6,500 additional blogs and brand sites. Publishers who add ZipList are reported to see, on average, a 15 percent increase in pageviews.

The company’s products are free to users. Its business model is based on ad revenue sharing with its partners, much like the model of  Google AdWords. In the words of Allan, “the difference is that we create pageviews.”

ZipList was acquired by Condé Nast in April of this year for $14 million but continues to operate as an independent company. Prior to the acquisition, the startup had raised $4.5 million from SoftBank, Martha Stewart Living, Omnimedia, and other angel investors.

Since integrating into the behemoth publishing company, ZipList has been on a hiring spree and has accelerated its partner integrations. Its CEO says, “We’ve been doing a lot of work behind the scenes. We have 30 more partners lined up and ready to go. Also, Meal Planner is the first new product you’re seeing, but we’ve got a ton in the pipeline.”