Much of consumer technology is designed to make life simpler in some way. Uber, Hailo, and TaxiNow solve the taxi problem, Evernote solves the self-reminder problem, HotelTonight solves the last minute travel problem.

A new crop of them does so via personal assistants. There are marketplaces like Taskrabbit and Zaarly, and hourly personal assistant services like Exec, and even a few super secret ones used by Web illuminati (this blogger not included).

Fancy Hands is the latest one to cross my radar. The New York-based company has raised $1 million in venture backing from betaworks, SV Angel, David Tisch and Lerer Ventures to expand its personal assistant network.

This week, the company launched Fancy Hands TeamWork for companies. The service, sold by monthly subscription, has become a popular perk for employers to offer because bosses get monthly reports on how much time Fancy Hands is saving their employees, founder Ted Roden says. TeamWork allows for multiple accounts to exist under one account manager. 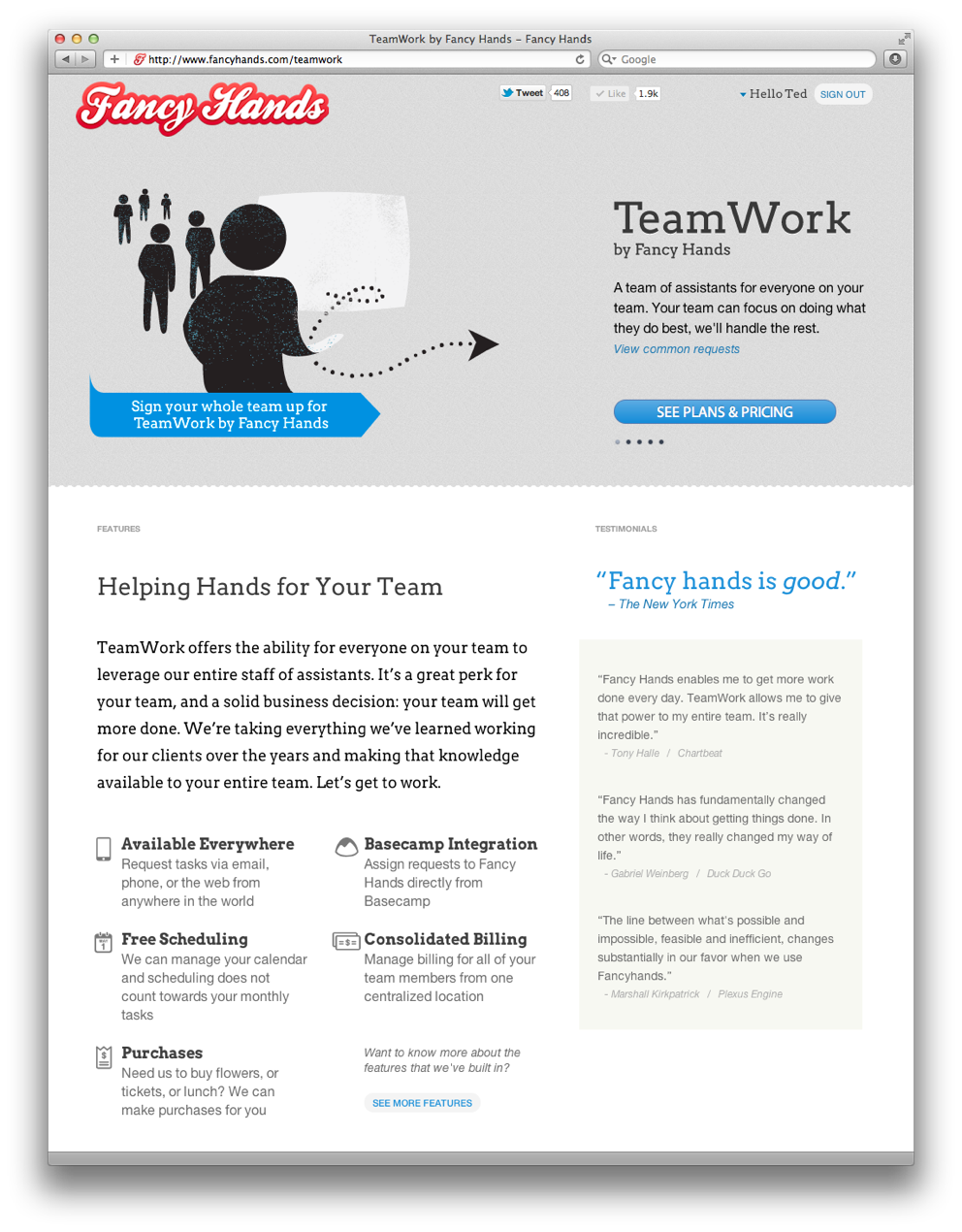 Despite the crowded marketplace, Roden doesn't believe Fancy Hands competes with the likes of TaskRabbit and Zaarly. Fancy Hands' biggest competitors are companies with equally as ridiculous names such as GetFriday, AskSunday, and those featured in the four-hour work week canon. Those companies offer cheaper assistants based in India.

Roden says Fancy Hands is more expensive but its domestic assistants don't face any cultural barriers to completing tasks. Further, the company has developed seamless software that ties its system into calendars and Basecamp. The software also helps with tasks that don't require a human to complete. For bigger, more labor-intensive tasks, such as transcription, Fancy Hands will partner with a lower cost provider in a foreign country.

Typical tasks include scheduling meetings, customer service-type of phone calls, making online payments and setting up various online accounts, and light research. A starter package costs $25 for five tasks a month; Fancy Hands' network for 1,000 or so assistants get paid anywhere from $2 to $8 a task.

The assistants are mostly people between jobs, Roden says, but several have made it into a full-time gig. Unlike Exec, which charges $25 per hour for its assistants, Fancy Hands' crew doesn't run errands. Instead, they can arrange services, such as dry cleaning drop-off.

Roden says the number of tasks users request is growing faster than the number of users. "People are upgrading to higher plans, which we see as a good sign," he says. Paid sign-ups are growing at around 20 percent a month. Roden admits the company hasn't done a great job of giving users examples of ways to use the service, which is something he plans to focus more on now that TeamWork is in place.

The launch of TeamWork coincides with an overall relaunch -- Fancy Hands hired David Trawin, former designer at Busted Tees, to redesign the site. "Most 20 to early 30 somethings probably have a shirt he designed in their dresser," Roden said.

Roden started the company after going through a particularly time-crunched period. He'd had a baby, written a book, was working on News.me, under the ownership of the New York Times. Then News.me sold to betaworks. He had a lot on his plate, so (naturally), he built a tool to manage a network of assistants. Thus, Fancy Hands, which he says helped him to meet the deadline on his book.

I've now used it to find and schedule an apartment cleaning without having to *shudder* make a phone call. The service would not, unfortunately, call Chase to negotiate for a lower credit card rate, which seemed like it could have been an identity theft liability anyways. (Fancy Hands can buy things on your behalf by fronting the money and then billing your Fancy Hands account, however.) Now to get PandoDaily to add TeamWork to our (very short) list of company perks…

[Disclosure: Lerer Ventures is an investor in PandoDaily.]