With as much time as we spend emailing people, it can be easy to forget how big the physical mailing market still is. In fact, its size (and wastefulness) is one of the underlying reasons why physical mailing is so ripe for innovation. And Austin-based startup, Outbox, is one startup that is looking to take on this market by piggybacking the existing mail infrastructure, digitizing it, and making a nice profit off the top.

Outbox provides a service that will no doubt prove popular, once it finally launches nation-wide. The company securely intercepts and scans physical, letter-sized mail, catalogs, bills, and anything else that one would receive in the mail. With same-day turnaround, the service then pushes the email to your iPad, where the mail can be read, tagged, and stored indefinitely. Yes, it seems obvious, but Outbox seems further along than any competitors to making the goal a reality.

While Outbox's service seems in the why-didn't-I-think-of-that category, that’s because the simplicity is by design. As with most startups though, simple doesn’t mean easy. The company has put in a mountain of effort into the service, which is apparent when opening the application. The app is superbly designed, and provides not only access to the current pile of mail for the day but also the ability to browse the archive of scanned mail.

The value proposition of Outbox can’t be understated. Instead of having to go through a stack of mail everyday at your home, imagine being able to do it on the way to work, or on an airplane, or even on the other side of the world. From a personal standpoint, this will be useful to me, due to my travel and constant moving. For everyone else who lives a moderately busy life, it would be just as valuable, even to the point where it’d be reasonable to expect that people would pay for it (which is saying something these days).

The application is great, but the logistics side of the operation is just as impressive. The company has managed to negotiate a first of its kind partnership with the United States Postal Service to act as a mail interceptor. When people sign up for the service, Outbox tells the USPS that it should be sent all of the mail directly, instead of the mail being delivered to the physical address. 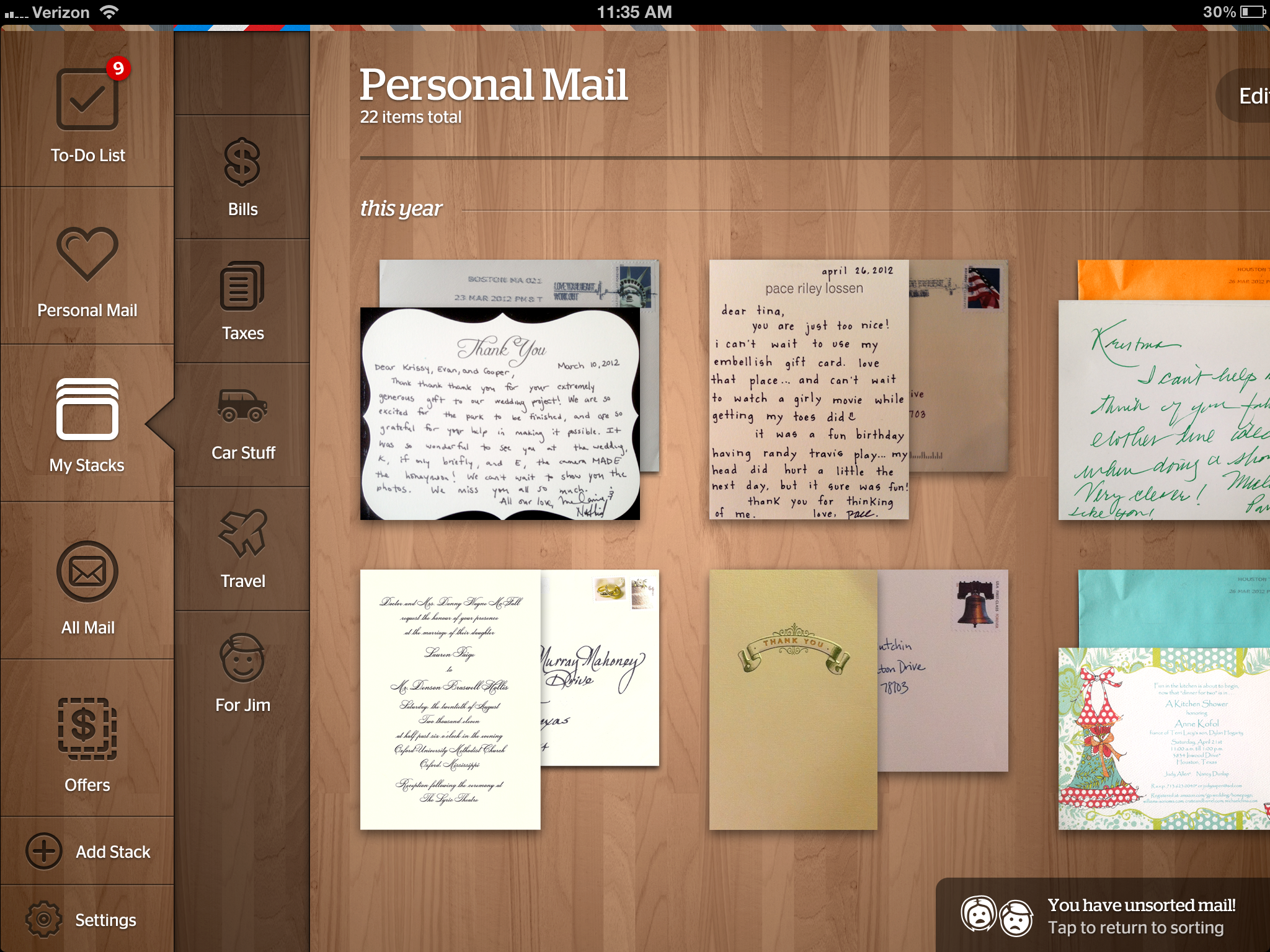 Then Outbox takes the mail, scans it with machines, encrypts it, and pushes it out to the application. The user can then decide to have the mail sent physically – more common for personal, handwritten letters that have sentimental value – or can have the mail shredded.

Since the operation is focused on security as much as usability, the actual disposal of the mail is actually more secure than if it wasn’t intercepted at all. After all, how many of you scan, encrypt, and shred your mail when you receive it?

Obviously, not all mail should be scanned though, and the Outbox team is aware of this. If you’re getting a package from Amazon, it isn’t very useful to have a scan of packing slip sent to your iPad. So the company will still forward the larger items to you, without a delay. For magazines and catalogs, you can view them in full on the iPad, or have them sent on for a better reading experience. It’s this apparent seamlessness that makes the service seem too good to be true.

While the application for users is useful enough to merit attention, the business side of the company is just as compelling. When the company finally launches the service nationwide in the next 12 months, users will likely flock to the service, if it is reasonably priced. With so many users being locked into a specific service, it is bound to grab the attention of major billers. This is something that the company is poised to capitalize.

When the company does get the attention of larger companies, it has a few additional revenue models it can experiment with. The company can charge the mass-mailers to directly send digital copies to recipients, it can charge for ads akin to local pamphlets, or it can push an ad network similar to Google’s ad program for Gmail. The most intriguing of the above is changing the mass-mailer industry by directly sending digital copies instead of physical ones. 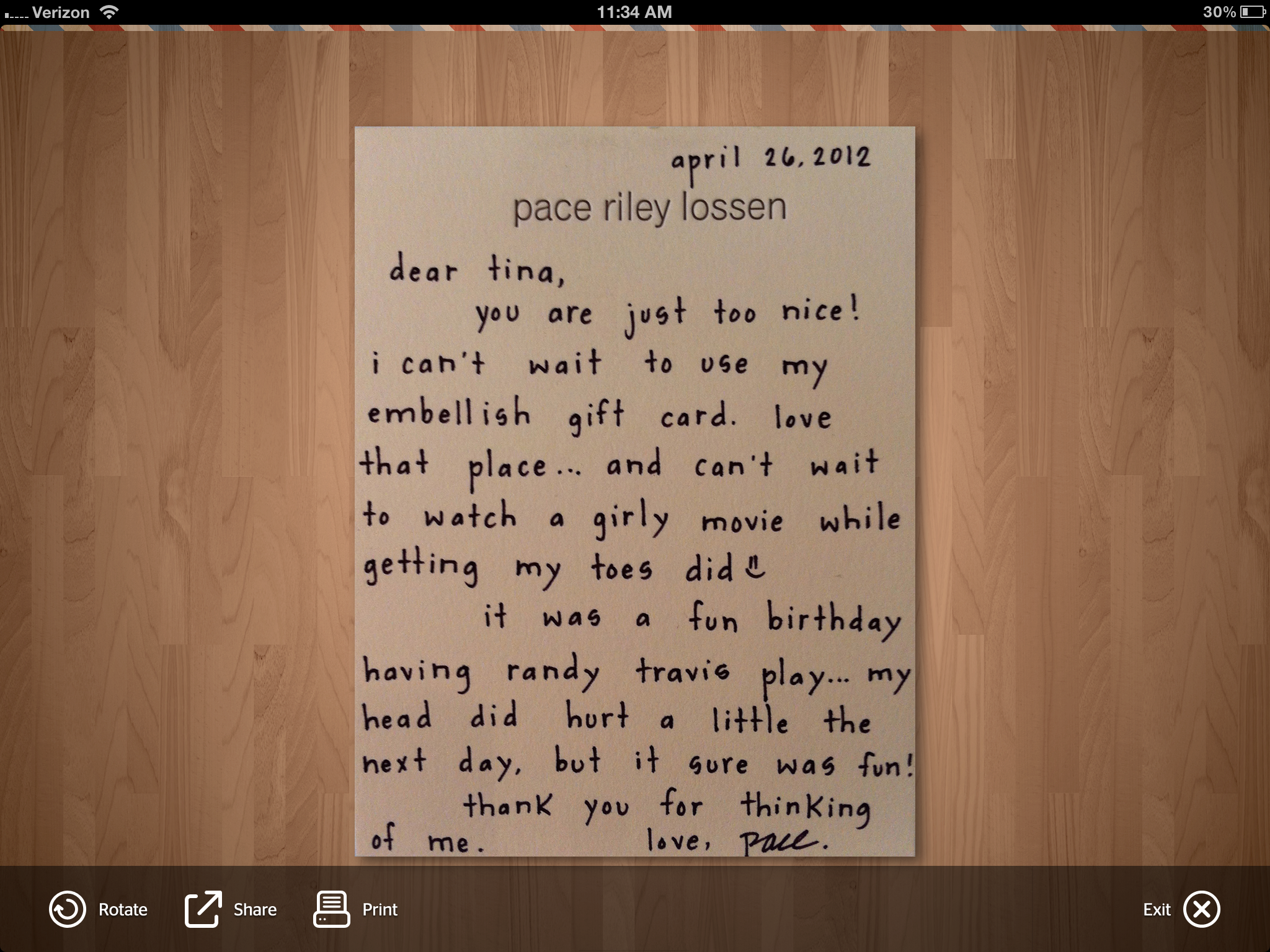 Considering the process that mass-mailers go through to send out bills or pamphlets, it’s immediately clear how ridiculous the billing system is. Bills and mailers are put together and designed on computers, only to be printed out and mailed, where they are then either thrown out or stored in a filing cabinet. At every point, a digital copy would be more useful and environmentally friendly.

With Outbox, mass-mailers can skip the printing step, and send the digital copy to the users iPad directly. It has the same chance of being seen, but it saves everyone money, and cuts down on the mountain of paper being used every day.

If only 20 percent of people in the United States switched to electronic billing, nearly 150 million pounds of paper and 550 million pounds of wood would be saved per year. Right now though, most people don’t do ebilling because it either isn’t provided, or because it isn’t advertised prominently. If people are already receiving digital scans of their bills, it stands to reason that companies are just going to phase out physical mailing to save money.

Outbox isn’t the only company trying to solve this problem, with competitors like Doxo in Seattle also trying to tackle the ebilling problem. However, it is the first to have a partnership with the USPS, something that is immensely valuable. This means that the company can just piggyback off of existing distribution channels for mail until the switch to digital reaches critical mass.

One of the more interesting parts of the Outbox story is how it got to Austin. The cofounders, Will Davis and Evan Baehr, chose Austin to start the company despite the fact that they were very well connected outside of the area. Both graduated from Harvard, and both have enough experience to start the company in virtually any city. In fact, Baehr formerly worked at Facebook under Sheryl Sandberg, and also worked for Peter Thiel at Founders Fund. With connections like that, it begs the question why they would move to a smaller and less-developed ecosystem like Austin.

The answer is that the cofounders saw Austin as a tighter community. This is something I heard from dozens of people in the Austin area. When an entrepreneur comes along and wants to build something in Austin, it is easy to get a meeting with anyone you need. Not only are doors always open, but people welcome new startups into the area with open arms. This, and the combination of a strong technical talent pool, pushed them to start the company in Austin.

The company has $2.2 million in funding from a number of angel investors, including Mike Maples from Floodgate partners and Peter Thiel.* In addition, the company is being advised by a number of relevant people, including Bob Reisner, a former VP at the USPS, Andy Rendich, the former COO of Netflix, and Joe Lonsdale, the cofounder of Palantir.

At this point, the service is only being provided to a few dozen users in a beta test. All of them are located in Austin, so that the company can keep in contact and monitor usage more closely.

However, the company is taking signups so that when the service launches nationally in the next year, people can be put to the top of the list. In addition, if there is a particularly high concentration of signups on the list from a particular area, it stands to reason that the likelihood of the service being rolled out there sooner is increased.

The problem that Outbox is looking to take on is sizable. Not only is it hard to scale logistically, but also, the mail industry is intensely scrutinized, regulated and monitored – not to mention the veritable monopoly that the USPS has on the industry. That being said, the combination of bringing the mail industry into the modern era, while still working within existing channels, could provide the formula for success for the company.

[Disclosure: Peter Thiel is an investor in PandoDaily.]