Zao is a social hiring startup that allows employers to extend referral reward incentives beyond their employees to entire social network surrounding their company. This means the system intelligently identifies qualified candidates from within a trusted referrer's social graph and then pays cash to the referrer following a successful hire.

Through this service, the people who actually understand a company’s needs -- i.e. its employees, business partners, vendors, and friends of employees -- can be compensated for filling open positions with top candidates. More importantly they can be guided to identify the best possible candidates.

An employer simply uploads an open position and sets a reward (the company recommends $1,000 to $5,000 for sufficient motivation). The opening can then be forwarded to select trusted individuals or to an entire network by email, facebook wall post, or LinkedIn update.

The platform uses matching algorithms to guide would-be referrers through their social networks, including LinkedIn, Facebook, and Twitter, to identify viable candidates and also people who are likely to know such candidates.

Zao founder Ziv Eliraz is clear that he wants to stay away from promoting spam or hiring pyramid schemes. At the same time, he wants to simplify the process of finding the very best candidates.

To accomplish both these objectives, employers can limit the distribution of the job opening as narrowly or widely as they see fit by limiting the number of times it can be forwarded and by whom. Those receiving the inquiry can connect to their social networks and see which potential candidates are likely the best fit.

Eliraz knows that referrals are the number one source of hires and are even more common in high tech positions. Unfortunately, most employee referral platforms are simply applicant tracking systems or “glorified filing cabinets,” as he calls them.

“Bolting on social after the fact is putting the cart before the horse,” says Eliraz. “The big question is, how do we focus on the horse? How can we identify as the MOST qualified applicants? That’s where our algorithms come in.”

The company does three things to streamline and supercharge hiring. First they allow employers to ask the question, “Who do your friends and contacts know?” Second, the company’s algorithms allow this question to be answered in a precise and targeted way.

Third, they use gamification to incentivize and reward those who make the effort to fill positions. Not only does the person who successfully fills the position get compensated, but Zao gives employers a leaderboard which ranks the number and quality of leads generated to enable recognition of a wider range of contributors.

Employers are given a dashboard to manage the entire recruiting process. In the system, they can see open jobs, leads, applicants, the referral map (meaning where the candidate came from), and any notes included by the referrer.

Like many of the best ideas, Zao was created to scratch the itch of its founder. Eliraz recently built the US office of an international technology company entirely through referrals from business partners and clients.

“The people I’d worked with at other companies immediately understood what I was looking for in a candidate because they knew the industry,” Eliraz recalls. “Instead of interviewing 10 people to fill a single position, I got a steady stream of qualified candidates and was able to quickly build the workforce I needed.”

Following such a clear illustration of the power of social referrals, he set out to design a platform that would allow other HR professionals and hiring managers to make hires by leveraging social networks to identify and recruit otherwise hidden talent.

Eliraz quickly put his money where his mouth is. Not only did he build his startup team using the principles of the Zao service, but he also mapped out the referrals that took place on the company’s website. 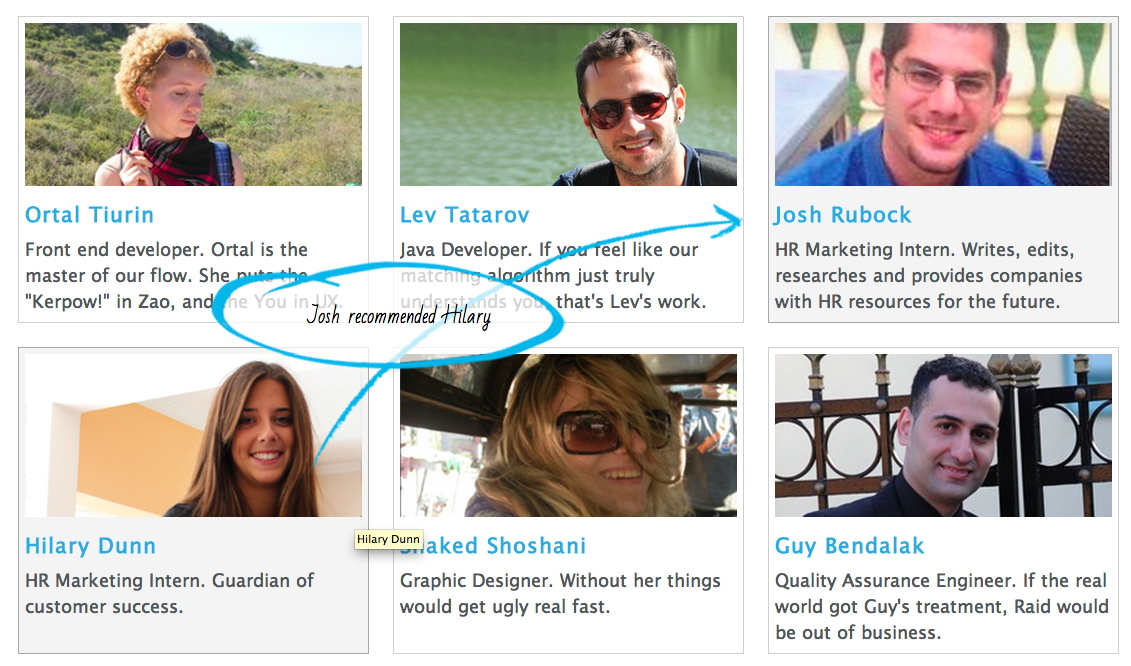 Anyone who’s ever built a company or a team knows that one of the biggest challenges is attracting talent. As a general rule, the best candidates are rarely “on the market” or openly “looking” for new positions. But these people are more easily reachable through a trusted contact.

One of the most vexing problems entrepreneurs face is where to find strong talent for their companies. The kind of people you want to hire for your company are in short supply and they are rarely out looking for a job. You have to go find them and recruit them to join your team. But where to look?

Wilson’s first suggestion was “People you know and people your team knows. This is the most obvious but also often the most fruitful source of talent.”

Zao launched into closed beta less than two months ago and has two dozen active customers. The company is currently raising its first round of funding and is preparing for a commercial launch later this summer.

The platform is completely free to use and companies only pay when they make a successful hire. Zao charges a 30 percent commission on top of the reward paid to referrers and collects this fee 90 days after new employees join the company. Employers pay Zao directly, and it in turn handles all compensation of referrers.

For companies making multiple hires monthly, this process is extremely scalable and eliminates much of the administrative headache of typical referral programs. These customers can send one lump-sum payment to Zao to cover all associated incentives.

While it's early, the company is seeing phenomenal success in filling open positions and is gathering some interesting data along the way. This latter point is going to play a bit part in the company’s future.

As more and more positions are filled, Zao will get a clear understanding of the best sources of referrals and the most efficient and effective levels of compensation, among other data points.

The name of the game in building any company is identifying the best possible talent. No one wants to spam their friends and colleagues. Employers are even less excited to spend their time sorting through unqualified applicants.

Zao empowers employers to incentivize the most connected people in their networks and dramatically simplify the process of finding qualified candidates. The end result is time and money saved and ideally positions filled from among the widest possible pool of qualified candidates.