With Curation, Social Tools, and Delivery, HipSwap Lays Down the Gauntlet in the Local Listings War

The war is on, and the battlefield is “local listings.” We’ve previously written about the apathy and innovation-squashing ways of market incumbent Craigslist. It was one too many bad experiences with the online classifieds marketplace that led Rob Kramer and Andrew Skinner to launch HipSwap in March of this year as the latest in a long line of would be Davids hoping to unseat Goliath.

HipSwap has added a number of unique twists on the local marketplace and is growing like a weed as a result. First, and most simply, the site is beautiful. Every item listed on it has a picture attached, making it as easy to navigate. Second, listed items can be grouped into collections much like Pinterest. Third, with social tools, users can follow friends and tastemakers and share listings to the larger social graph.

Now, with a redesign rolling out today, the company has added elements of curation to its already visually appealing and social platform. Oh, and for good measure, they’ll deliver your stuff, too -- at least in LA and NY at this point. (More on this in a bit.)

“We want to make buying and selling unique items easy, enjoyable, and visual, both online and on mobile,” says co-founder and CEO Rob Kramer. “If Craigslist and Pinterest had a baby – that’s HipSwap.”

(Sidebar: As Sarah Lacy once pointed out to me, Silicon Valley founders prefer the metaphors “We’re X for Y.” For some reason, here in Los Angeles, it tends to be “If X had sex with Y...” It’s neither here nor there, but an interesting observation nonetheless.) 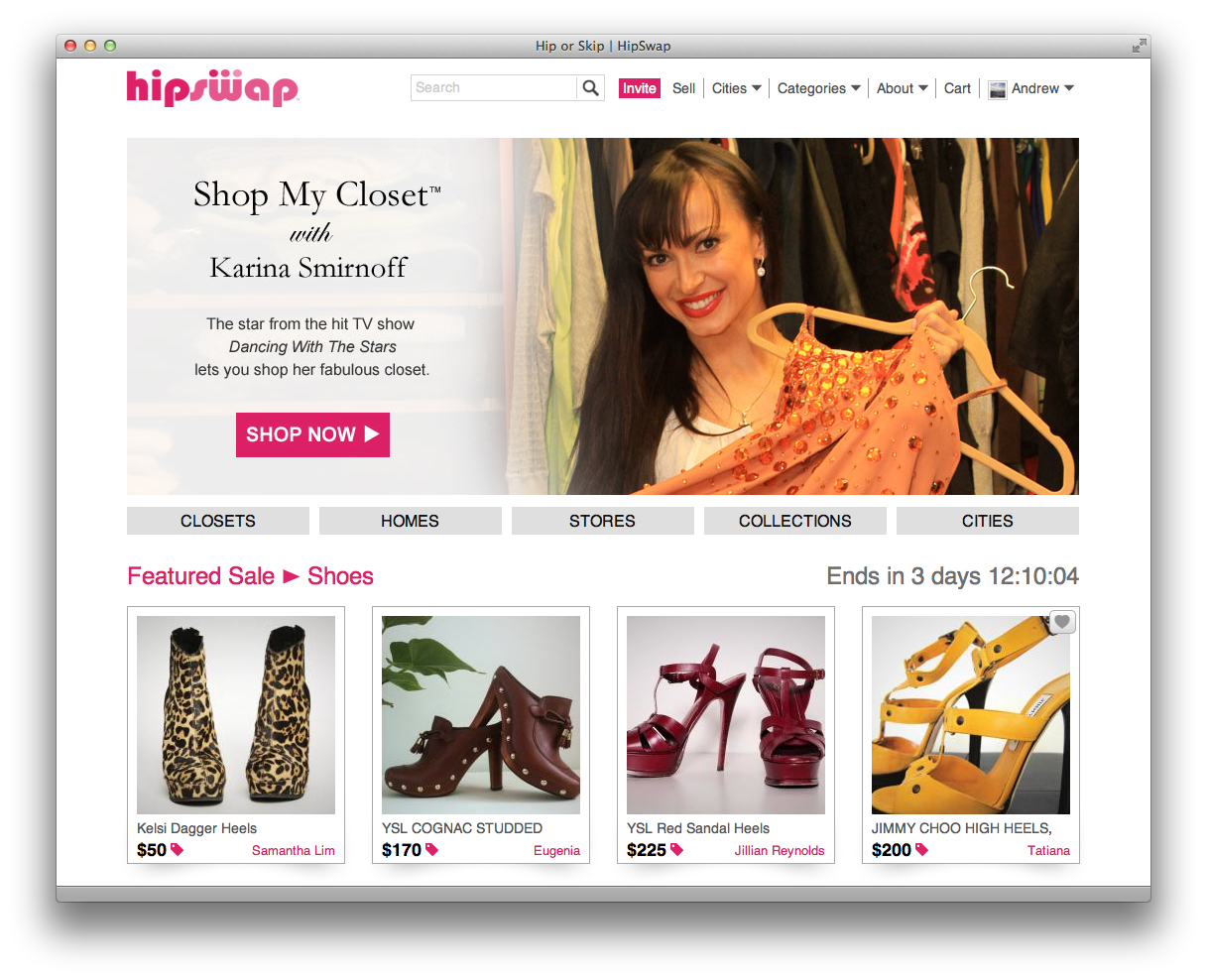 So back to the new and improved HipSwap. The local listing platform has enabled users to vote for hippest items and curate their marketplace experience around the product categories that most interest them.

The company implements this through its “Hip or Skip” feature. Each user simply votes either “Hip” or “Skip” for each listing. These favorited items directly influence the types of merchandise that the user encounters going forward. Once the user has voted “Hip” on nine or more products, they’ll be presented with their own unique curated collection on the HipSwap homepage. Hip or Skip functionality is currently only available on the Web, but the company plans to roll it out for mobile in one to two months.

I raised my concerns to Kramer about the issues of filter bias and limiting serendipity. He said that these are really non-issues, because users can always use the site’s search feature to discover items outside of their favorite categories.

One fascinating step the company is taking to combat these biases is promoting select “hyper-local markets” known for their unique culture or aesthetic. Examples he offered were Williamsburg (Brooklyn) NY, Venice Beach CA, and South Beach (Miami) FL. This way, users living elsewhere can shop curated marketplaces that represent the best these locales have to offer.

Hipswap has built-in additional social tools able to share across the social graph. Its CEO says, “Buyers [can] Tweet a collection of their favorite designer shoes, ask their Facebook friends which print they should buy to hang on the wall of their living room, or Pin their collections on Pinterest.”

In its latest, and arguably most surprising twist, HipSwap has begun allowing sellers to dual-list their items on Craigslist with a single click. As a bonus, the resulting Craigslist listing is visually stylized much like the original on HipSwap, making it far more appealing than the traditional Craigslist format.

When I questioned Kramer on the wisdom in supporting his biggest competitor in this way, he acknowledged that Craiglist’s sheer size might mean that dual-listed items sell there first -- at least initially. What he’s betting, however, is that users confronted with both listing experiences will be further reminded of the superiority of the one offered at HipSwap. 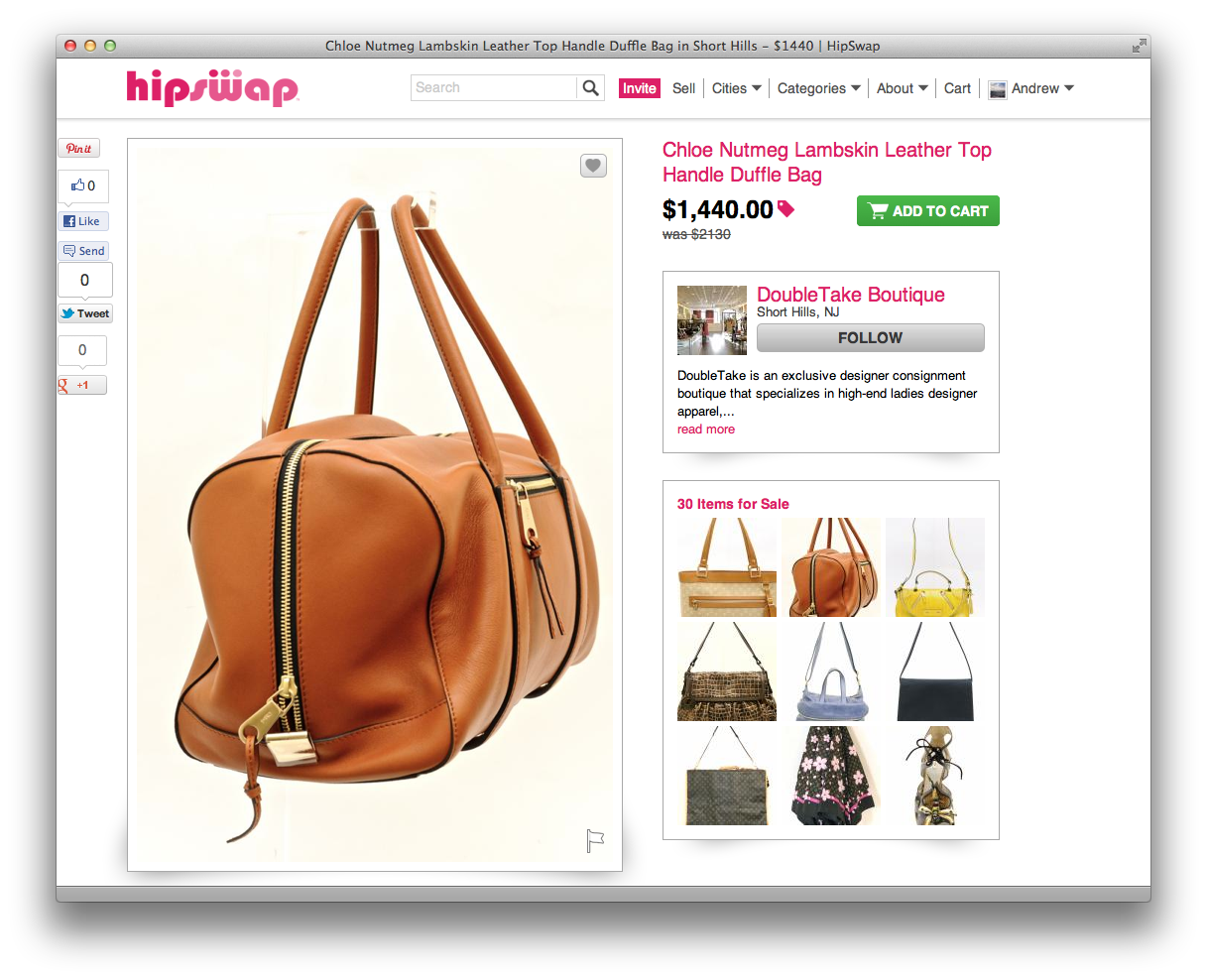 Because HipSwap is a social place, buyers and sellers have user profiles. This goes a long way to removing the creepiness that is so pervasive on Craigslist. Buyers can review seller bios, linked social media pages, favorites, and followers. When a buyer finds a seller whose tastes they particularly like, they can follow that person and be notified when new items are listed for sale.

Circling back to the delivery initiative I mentioned earlier, HipSwap now offers delivery in Los Angeles and New York. This is great because instead of waiting for items to ship or having to arrange to meet-up with a total stranger, buyers and sellers can have their items delivered in HipSwap’s hard-to-miss mustached pink van.

From the moment the buyer selects and pays for the delivery option, the item will be delivered within three days (Tuesday through Thursday, Saturday, and Sunday only). Currently, the service is promotionally priced at a nominal $5, but this may change in the future.

The small fleet will grow in size and additional markets will be added going forward. However, Kramer says, “Don’t expect us to roll out 1,000 pink vans. We will end up being more of a ‘distributed network’ with internal capacity plus external partnerships. Somewhat like Uber plus TaskRabbit.” (Again, with the startup sex.)

“We want to own the virtual supply chain for the secondary market of goods,” Kramer says.

The company is also launching something it calls “HipSwap Saturdays,” where it will pick up unwanted goods from its users and deliver them to Goodwill free of charge. The goal is to make it as easy as possible easier for people to donate unwanted goods to charity.

HipSwap has taken a number of attractive steps to distinguish itself from its competition. The listings site currently has “tens of thousands of sellers.” Observationally, it would seem based on the featured listings and seller profiles that the site currently leans  more toward female users, but this is in no way a gender specific platform.

According to its CEO, Hipswap's user base is growing at two to three percent per day. (That's nearly 250 percent per month; remember the compound return lesson from the penny doubling riddle?) The company raised $1.2 million in seed financing in October 2011 from Founder’s Fund, Allen & Co, Greycroft Partners, Baroda Ventures, and others.

“Whether it’s us or Amazon or someone else, there will be a winner in this space,” says Kramer. (Notice who he didn't mention.) “They will have to recognize and respect the competition, and will win by creating a better experience. That’s what we’re trying to do. There’s probably only room for a few successful marketplaces. At the end of the day, this is about consumer choice.”