Startup Culture is Becoming Mainstream Culture, and Startup Threads is Capitalizing On It

When a tech CEO's wedding is tabloid fodder, we know a cultural seachange is afoot. A hipster music festival now dedicates two days to entrepreneurship. Two startup-themed reality shows are in the works. Ashton Kutcher is no longer an anomaly -- Adrian Grenier, Leonardo DiCaprio, Tobey Maguire, Jay-Z, Shakira, and Will Smith are now all angel investors. It is very cool to be in tech.

Now, a company that got its start making t-shirts and other swag for startups is boxing that stuff up and exporting it to fans of startup culture around the world.

Startup Threads is a side project of Frank Denbow, a developer who works on beta-mode Songsicle. He noticed the importance of the startup t-shirt -- if you have a name you must have t-shirts -- and the way those in the scene seemed obsessed with collecting them.

Perfect example: Seth Bannon, founder of cause-based social outreach platform Amicus. He's been involved in the New York tech scene for less than a year, and in that time he's amassed hundreds of t-shirts. All of them were free, many of them mark a specific event, and plenty are obsolete, thanks to name changes or pivots of the startups they represent. This makes them even more valuable, in the sense that a rare baseball card might be. 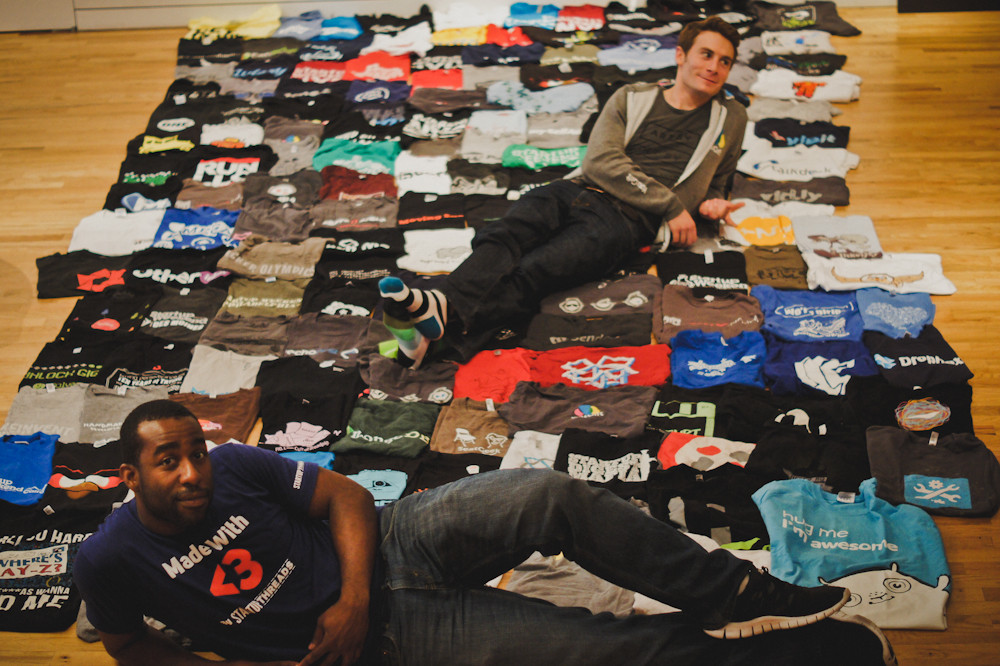 Denbow said his startup-swag-in-a-box program has been a hit, and surprisingly, 40 percent of subscribers are international. Each month he sends out a limited run t-shirt, a sticker and a few other "discounts and surprises." So far Startup Threads Monthly has featured Twilio, Hipmunk, Breadpig, and SeatGeek. This month's is MailChimp.

That people will pay $15 for something anyone in the tech scene can easily get for free speaks to the greater trend at play here: People outside tech hubs like Silicon Valley, New York, and Boston want to feel involved. A rare startup t-shirt is on par with a 70s concert tee. It's a badge of "I was there" honor. It's certainly been said before, but it's true now more than ever: Founders are the new rock stars.

Startup Threads Monthly is one piece of the business Denbow put together. He also helps startups design, print, and fulfill merchandize for startups. Coming up next is Swagmate, a service that makes it easy for startups and event organizers to send out swag to customers and clients without handling the inventory. This means that every time someone watches an entire episode of "Why Isn't This News," PandoDaily could send them a t-shirt at the click of a button, rather than force them to email Oni, and then make Oni throw a shirt in a box and ship it.

It makes sense -- the t-shirt is of utmost importance for startups, it appears, and those of us who are running lean would rather not deal with the annoyance of designing, ordering shirts and distributing them.

Denbow saw the spreading of startup culture beyond Silicon Valley (and New York). Every culture has it's own uniform -- he's just exporting it.