According to traffic optimization startup JumpTime, online publishers are regularly leaving enormous sums of money on the table due to a lack of information and a poor understanding of the true value of each piece of content.

The data-driven company uses its now-patented algorithms to calculate the real-time value of every single link on a given Web page and optimize traffic flow across entire websites to maximize monetization.

“Ecommerce has always had metrics, while ad-supported businesses have not," says DiLorenzo. "They’ve only had proxy values, like page views, time spent, and now a cadre of emerging social metrics. We see clients with usage metrics that go up quarter over quarter without financial performance metrics changing. These are essentially empty calorie pageviews.”

JumpTime has created FloPower, the first ever metric that express the value of each content asset in terms of both dollars and page views. This value incorporates both what happens when someone gets to a single page on a site and, more importantly, what happens next. Do they browse further within the site or leave immediately? The output to clients is the real-time economic value of digital assets, which can then be used to optimize ROI of content investments. 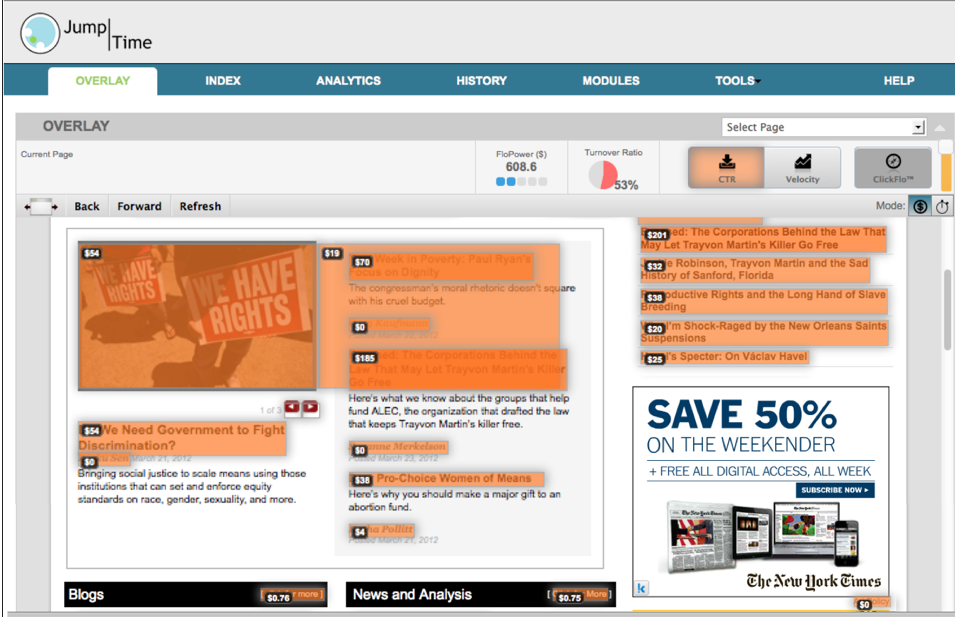 Current JumpTime clients include MSNBC, media conglomerate the Hearst Corporation, and newspaper The Nation, plus several other off-the-record companies which DiLorenzo describes as mostly Top 100 comScore sites. She claims that these users have seen “dramatic improvements in site wide revenue and engagement.”

The best way to understand the impact of this technology is by example. Consider page A on a given site which has a $10 CPM and page B which has a $20 CPM. (CPM, which stands for "cost per mille," is a way online advertisers measure the cost per 1,000 estimated views of an ad.) Without any additional information Web publishers naturally prioritize the seemingly more valuable page B, driving as much traffic there as possible. What is being missed, is that viewers may leave the site immediately after viewing page B, while page A drives traffic onward to additional pieces of content valued at $5, $8, and $2. In this scenario, page A is worth $25, while page B is only worth $20. The problem is, this behavior changes constantly.

“Some page templates currently say essentially, ‘read this and leave our site,’” says DiLorenzo. “We can make sure publishers don’t make pages that dead end and that the most valuable content is properly highlighted.”

JumpTime received a patent for its “Method and system for determining overall content values for content elements in a web network and for optimizing internet traffic flow through the web network” (U.S. Patent No. 8,171,156).

This sounds simple enough considering the above example, but in reality, on a site with millions of pieces of content and with user behavior changing moment by moment, the challenge is far more complex. FloPower is big data at its finest, using probabilistics, econometrics, machine learning, and financial engineering to calculate an infinite number of engagement paths a user can travel at any moment in time. The probability that a single piece of content will send traffic to another piece of downstream content then determines its value.

JumpTime offers its users three related tools. The first, its Traffic Valuator introduced in Q4 2011, is a manual decision support tool that provides editors with real-time information on the value of all the content available in a site. The second, its Traffic Optimizer released in May, automatically optimizes page programming and layout based on traffic re-circulation patterns to maximize economic value.

Today, the company announced the release of its third tool, Revenue by Traffic Referral Source. The new value metric calculates “the exact economic value in dollars of a site’s traffic referral sources including social media, search, referring links and partner sites.” This new tool is going to be a game-changer that for the first time offers actionable insights into the ROI of various audience acquisition methods. 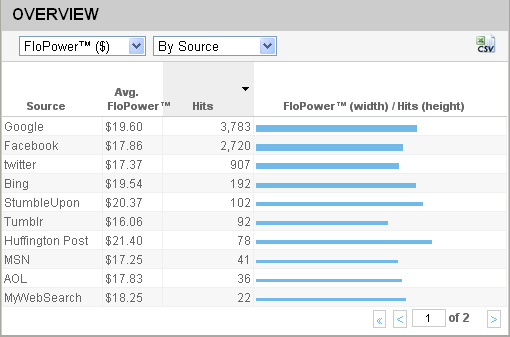 JumpTime is offered on a SaaS basis and does not receive any participation in the “lift” created by its products. While it’s currently only available to chosen partners, DiLorenzo predicts a point in the future when it will be offered on a self-serve basis. The company tested its algorithms on sites of all sizes and found it to work equally well in all cases. On the smallest sites, which in turn have the least available data, the tools take longer to arrive at initial conclusions -- day versus a few hours -- but then need to make less changes going forward.

The company’s current 12 person team does not include any sales staff. The next phase of growth will see it add additional personnel and dramatically increase its user education efforts. “Our sales process is really consultative, we need to walk people through how to put this information into context,” says the founder.

JumpTime was bootstrapped initially, with its founders choosing to build and test its product with real world publishers to prove it would perform prior to raising capital. In 2010, the company raised a yet-undisclosed $4 million in funding from the William Louis-Dreyfus family office. According to its CEO, JumpTime is currently raising additional capital to both expand its product offering and its team.

“We’re only scratching the surface of how to use value metrics across the board including for marketing, business development, and more,” says the JumpTime CEO. “We believe that these metrics are really essential KPIs for making decisions that will have a positive impact on your business.”